Very rough seas and gale force winds at the coast 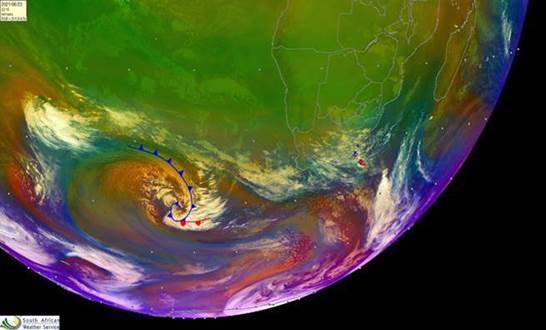 A cold front will make landfall over the south-western Cape on Friday afternoon, 25 June 2021, resulting in strong to gale force winds and very rough sea conditions, especially along the coastal areas of the Western Cape, spreading along the Eastern Cape south coast on Saturday morning, 26 June 2021.

A cold front is set to move in over the south-western Cape during Friday (25 June 2021) afternoon causing scattered showers and rain, especially over the western parts of the Western Cape, spreading along the south coast in the evening.

While rainfall is not expected to be a significant factor with this system, sustained strong to gale force north-westerly to westerly winds of 55-70 km/h will impact the south-west coast from the morning, spreading along the south coast of the Western Cape in the evening. These winds will further be accompanied by very rough sea conditions (5.0 to 6.0m wave heights).

These conditions, coupled with a full moon, are likely to result in dangerous conditions for vessels at sea. This may result in the risk of medium or large vessels dragging anchors or breaking mooring lines. Localised disruptions to beach front activities and damage to coastal infrastructure may also occur.

Strong winds (40-60 km/h) will also be present over the western interior of the country, especially over the Western and Northern Cape, and could result in localised infrastructure damage as well as a high risk for the development and spread of veld fires.

The South African Weather Service has issued the following Warnings:

The South African Weather Service will continue to monitor any further developments relating to this weather system and will issue subsequent updates as required. Furthermore, the public are urged and encouraged to regularly follow weather forecasts on television and radio. Updated information in this regard will regularly be available at www.weathersa.co.za as well as via the SA Weather Service Twitter account @SAWeatherServic