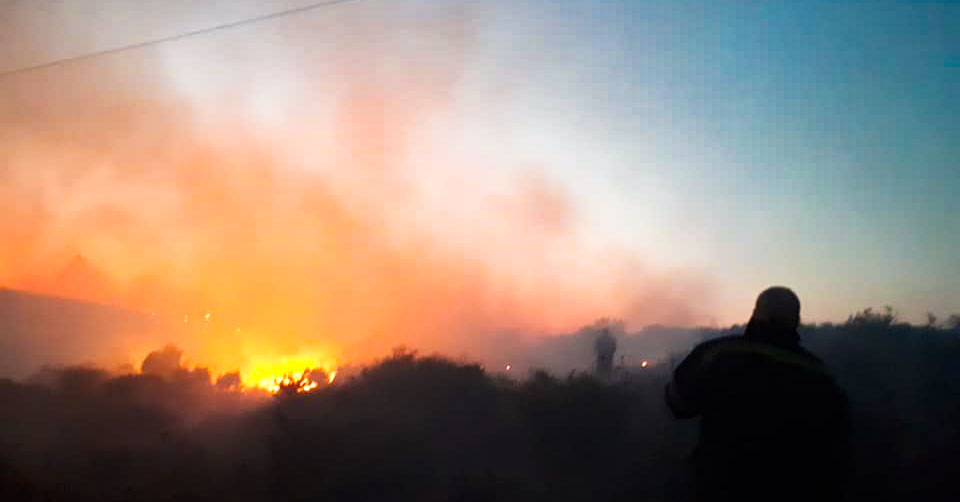 Makana fire fighters tackle a fire that spread along the valley between the Monument and RHodes University's hill-top residences on Monday 21 June. Photo: Sue Maclennan

Fire fighters are monitoring a small fire at the disused quarry behind Rhodes University’s Chris Hani House and the Continuing Education Centre in Makhanda. At the moment the team is confident they are able to contain the fire which began burning around 9am today.

Teams from Makana and Sarah Baartman Fire Services, Rhodes University and the Monument, local security companies and several citizen volunteers battled a blaze that started in the valley between the Monument and the newer hill-top residences around 3pm on Monday 21 June. The fire, fanned by windy conditions, spread up the hill towards the Monument, as well as southwards towards the University’s Gavin Relly Postgraduate Village.

A team remained at the Postgrad Village late into the night, monitoring burning that continued at the southern end of the valley, close to the complex. Earlier, students at the complex were alerted to be prepared to evacuate should it become necessary. Students and university officials rushed to the Village to monitor the situation and prepare for action.

Water tankers from Rhodes University and Makana Municipality were on hand and Monument staff, with Basil Mills, dampened down surrounding vegetation in case the fire threatened the building. The Monument is supplied by a borehole.

At 11am today, Welkom told GMDirect, “The fire of yesterday is still fine at the momen; however fire fighters are busy at the Quarry that is burning at the moment but it’s contained. That is what is smoking.

“We are monitoring the area for any flare-ups and we are on high alert due to the weather conditions,” Welkom said.

West of Makhanda, the two separate fires that are being co-ordinated from the joint Operation centre (Coldstream in Lottering and Koomansbos in Witelsbos) were still burning this morning.

More than 100 fire fighters from six teams (two from Southern Cape and four from Eastern Cape) resumed for the day shift, relieving the teams that had worked overnight, Mokone said.

Working on Fire is a programme of the Department of Forestry, Fisheries and Environment.

“The wind is calm at the moment and the Fire Danger Index is standing at yellow this morning,” Mokone said. “Fire fighters are busy constructing a control break that will assist in preventing fires from reaching other areas.”

The N2 has been opened this morning and drivers are advised to be cautious and vigilant. Mokone said No structures had been affected by those fires yet and the cause was still unknown.