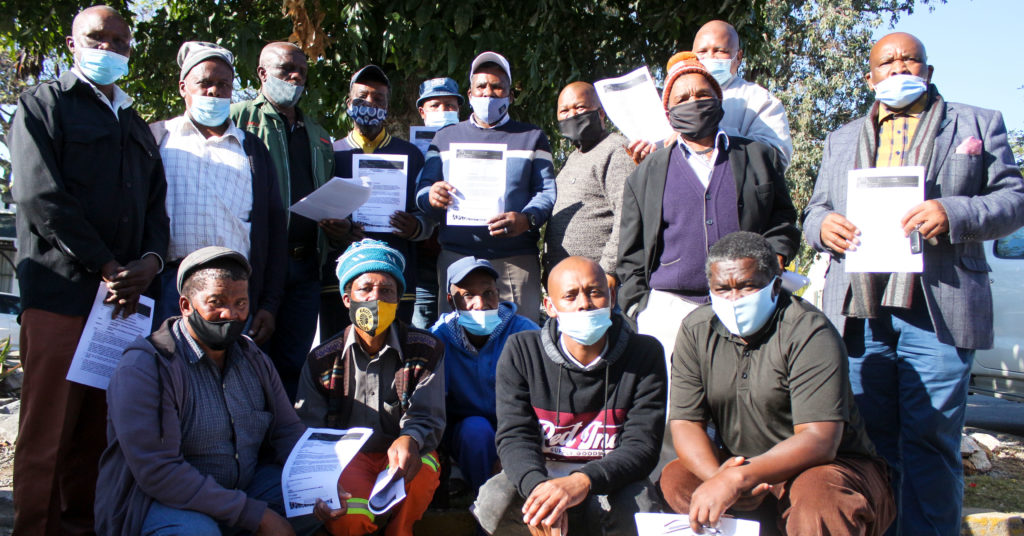 Some of the amakhankhatha and iingcibi, members of Isiko Loluntu, a Makhanda based association concerned with ulwaluko, who attended a workshop at the Graham Hotel ahead of the Winter Initiation Season. With them are outgoing chair of the intergovernmental Makana Initiation Forum, Councillor Ramie Xonxa (right) and Xolani Simakuhle, Secretary of Isiko Loluntu. Photo: Sue Maclennan

Makhi Mka is a very busy man this week – and a worried one. The Winter Initiation Season started on 11 June and ends on 30 July 2021 and Makhanda’s first winter season candidates for ulwaluko will be going to the bush this Saturday. Mka is the Department of Health’s designated medical officer for traditional initiation schools in Makana and Ndlambe and has been inspecting the sites in both areas.

In Makhanda, there are six initiation “boundaries” – all on the eastern commonages. Three are south of the R67 that passes Joza on the way to the N2 and three are between eThembeni and Transit Camp.

One of them, known as ‘Golf Course’, has been turned into a rubbish dump by residents in the area. Sewage has pooled close to another that is known as ‘Sewage’ because of its proximity to the eastern wastewater treatment works.

Then, the Customary Initiation Act rules that boys must have a medical certificate to verify that they’re in good health before being allowed to start their three-week transition to manhood.

For those due to start this weekend, this week was when they were supposed to be screened. Mka is concerned this may have been a challenge for them under the circumstances.

“Today [Thursday] there were boys who came to Tantyi Clinic and found it closed,” Mka said.

On Friday, Makhi is scheduled to visit all five clinics in Makhanda to check how many candidates have been screened.

“By the end of tomorrow I will know how many boys are undergoing initiation this season,” he said.

Parliament heard in March that 13 initiates in the Eastern Cape died during the summer initiation season, December 2020.

However, Makana’s good record when it comes to the safety of initiates makes it first choice for many families in the area. This has been attributed to a functional intergovernmental Makana Initiation Forum, led by the municipality. The Customary Initiation Act designates the Council Speaker as the coordinator of this body; however, during a Council meeting around two years ago, Makana Speaker Yandiswa Vara delegated the responsibility to busy Ward 2 councillor and current Infrastructure Portfolio Committee Chairperson Ramie Xonxa. Earlier this month that responsibility was removed from Xonxa and so it reverts to the Speaker.

While the departments of Social Development, Sport Arts and Culture, Education are also named as partners in the local initiation fora, currently only Health and the South African Police Service are directly involved. Xonxa represented Makana Municipality at a recent training workshop for traditional surgeons and nurses.

The prescribed ratio of amakhangatha (traditional nurses) to boys is one to 30. Makhi says three will be assigned to each ‘boundary’.

Nineteen local amakhankhatha and four iingcibi (traditional surgeons) gathered last week ahead of the opening of the Winter Initiation Season in the Eastern Cape for a briefing about adjustments made to ulwaluko (traditional male initiation) protocols. The additional requirements come as a result of a recent court judgment, as well as to minimise the spread of Covid-19.

They are members of Isiko Loluntu, a Makhanda based association of groups and individuals concerned with ulwaluko.

Traditional initiation was suspended in March 2020, at the start of the Covid-19 pandemic, with Premier Oscar Mabuyane declaring that it would be put on hold for the duration of the pandemic.

With a backlog of boys wanting to undergo ulwaluko,  momentum was gathering towards re-opening the initiation schools for the December initiation season.

But in November 2020, as Covid-19 infections rose, the Eastern Cape government announced that ulwaluko would be suspended during the Festive Season under Lockdown Level regulations. Initiation seasons coincide with state school holidays because most initiates are of schoolgoing age.

After strong protest from traditional organisations, the government reversed the decision and permitted initiation in the province to go ahead – with the exception of the Sarah Baartman District and Nelson Mandela Bay Metro. They were excluded because they were Covid-19 hotspots.

At the beginning of June, the dates of the Winter Initiation Season were confirmed as 11 June to 30 July 2021.

Nkosi Langa Mavuso is the chairperson of the Provincial Initiation Coordinating Committee (PICC) and acting chairperson of the Eastern Cape House of Traditional Leaders. In a letter to initiation stakeholders, Mavuso said the risk-adjusted plan had been approved by the Provincial Executive Council and was being submitted to the Minister of Co-operative Governance and Traditional Affairs.

Mavuso requested Health MEC Nkosazana Meth to open all screening and testing centres for the would-be initiates with immediate effect “if circumstances permit”.

He said that following a recent court ruling, boys aged 16 to 18 with consent from their legal guardians should be allowed to be pre-screened and Covid-19 tested for the purpose of undergoing initiation.

“They should be accompanied by their parents or legal guardian carrying South African identity,” Mavuso said.

“Last year, this district [Sarah Baartman] along with NMB was not allowed to go ahead with initiation,” Nkantsu told GMDirect. “This year, we have sensitised traditional surgeons and nurses to Covid – from the basics of how it’s contracted and how to prevent it, to detailed information about controlling ceremonial spaces to keep them Covid-safe.

“How to conduct a proper screening is a very important part of their training.”

All traditional surgeons and nurses who come into contact with the boys will be carefully screened, he said.

“If someone is not safe, they are not allowed into the ceremonial areas,” said Nkantsu.

District Clinical Specialist in the Department of Health, Dr David Qolohe, elaborated on the pre-screening and testing processes for those in contact with the boys.

The Department would mostly use the Covid antigen (‘rapid’) test because of its quick turnaround time; however, if someone has concerning symptoms, they will use the more accurate PCR test.

GMDirect asked Qolohe if the imminent Covid-19 third wave was a concern. He emphasised that all traditional surgeons and nurses would be tested before being allowed to perform their role in initiation. They, in turn, had been trained to do detailed health screening.