City Hall protest ‘not a shutdown’ 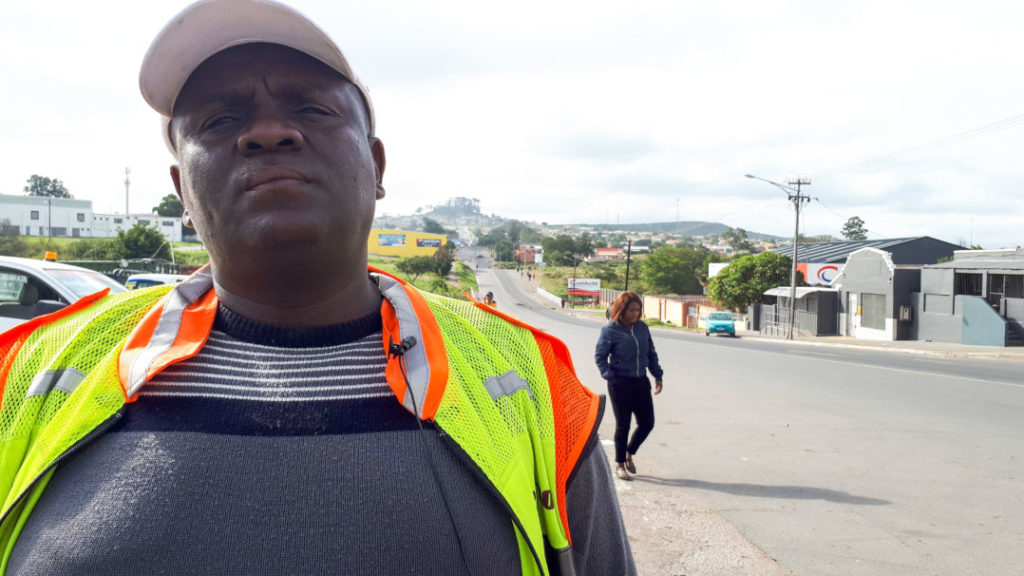 Lungisa Sixaba, one of the organisers of the Makhanda shutdown two weeks ago, has confirmed that taxis will operate as normal on Tuesday 15 June and that there will be no shutdown. Photo (26 May): Sue Maclennan

Members of the community have been invited to participate in a peaceful protest outside the City Hall in Makhanda from midday to 3pm on Tuesday 15 June. GMDirect can confirm that MECs Xolile Nqatha (Co-operative Governance), Mlungisi Mvoko (Finance, Economic Affairs and Tourism) and Weziwe Tikana- Gxothiwe (Roads, Transport and Safety) are scheduled to meet with community representatives at 1pm tomorrow.

They are expected to report back on a list of specific service delivery demands.

Representatives of the taxi associations and civic groups who co-ordinated the protests in Makhanda two weeks ago emphasised that tomorrow is not a shutdown.

“It is not a shutdown: those that must report to work – the taxis will be operating,” the Unemployed People’s Movement’s Ayanda Kota said. “Those who must go to school must do so.

“Those of us who are in the township will make our way towards the city hall. We will gather from 12 and we will be there until 3 or 4pm.”

Transport Manager for the Uncedo Taxi Association Lungisa Sixaba confirmed that taxis would be operating normally tomorrow and that there are no plans to close schools or businesses.

“We said to the MECs two weeks ago that we wanted a reportback in 14 days,” Sixaba told GMDirect. “Our delegation will be meeting with them in the Council Chambers at 1pm.”

The eight-person committee includes delegates from the two taxi associations Uncedo and BATA, abafundisi (church ministers) and civic representatives from different parts of the community.

“There is no strike,” Sixaba emphasised. “There will be no closure of shops or schools or workplaces.”

Sixaba said those who are able to gather outside the city hall, without disrupting their normal activities, are encouraged to do so. However, he said, “This can only be outside. Participants must wear masks and observe safe social distancing.”

Kota said, “Those of us who are in the township will make our way towards the city hall. We will gather from 12 and we will be there until 3 or 4. As per the demand of the people, the MEC is expected to address the community. They will be telling him they want to speak to the Premier.”

Kota said in addition to meeting with the delegation, the committee would insist that MEC addresses community members directly.

Following the two-day shutdown on 24 and 25 May, Tikana- Gxothiwe, Nqatha and Mvoko met organisers at the Monument late on Wednesday 26 May. They were joined at that point by representatives of the South African Municipal Workers Union, South African Communist Party and the South African National Civic Organisation.

Mvoko’s spokesperson Phumelele Godongwana confirmed that Mvoko and Nqatha were scheduled to meet the Makhanda delegation at the City Hall at 1pm tomorrow. Tikana- Gxothiwe’s spokesperson Unathi Binqose confirmed she will again form part of the government delegation.

Asked whether Premier Oscar Mabuyane would be in Makhanda tomorrow, acting spokesperson Mxolisi Sipondo said because of the multipronged challenges presented in Makhanda, the Premier had involved Government as a whole.

“All the relevant MECs are involved,” Sipondo said.  He said the Premier had been waiting for Nqatha to urgently table a report on the matter.

The Premier is visiting various hotspots in the province.