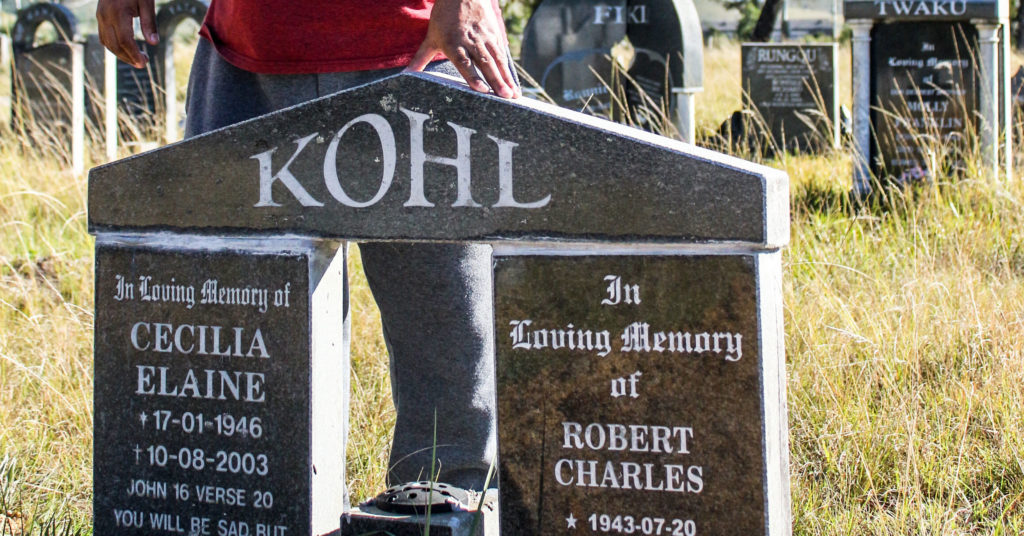 Cecilia and Robert Kohl's grave at Waainek Cemetery. The family wants to bring the remains of their brother Bully to the family plot. Photo: Sue Maclennan

Thirty six years after losing his big brother, Hein Kohl is determined to bring Alliston ‘Bully’ Kohl’s remains to rest with those of his parents. Sue Maclennan reports

The five or six teenagers blockading that section of Valley Road two weeks ago may have been aware of Bully Kohl’s grave just 10 metres from their barricade of rocks, logs and burning tyres. But it’s unlikely the boys playing their part in the Makhanda shutdown on 24-26 May knew who he was, how he died, or that five or six schoolboys their age were with Bully Kohl when he was shot running away from the police during the State of Emergency.

Every year when Mother’s Day, 12 May, comes around, the Kohl family is reminded of the terrible day in 1985 when Alliston ‘Bully’ Kohl was killed by security police bullets near JD Dlepu stadium in Joza, Makhanda. The story is documented in detail in the transcripts of the Truth and Reconciliation Commission (Bully’s dad Robert Kohl, and friend Tyron Austin, with questioning by the late Advocate Ntsiki Sandi) and Sapa’s report.

Hein was too young to join their cousin Arnold Bowles and a group of five boys who went with Bully to JD Dlepu Stadium for the funeral of a young man who had been shot by security police. Bully and his friends were members of civic organisation, the Grahamstown Youth Movement (GYM) and the SRC of their school, Mary Waters Secondary.

“There were five of us,” Bowles recalled. Tyron Austin, who testified at the TRC, was one of them. “That Sunday morning we decided to go to a funeral at the stadium.

“We thought, let’s first go and wait at the {Tantyi) graveyard. But the procession was taking too long so we said, let’s go to the stadium.

“It was a strange day – before it was bright sunshine, then when we got to the stadium it was clouding over.

“We followed the first group. They went into a sort of an alley and so we followed them. The next moment we heard gunshots. We split up then – the four went right and I went left and ducked behind a facebrick wall. After a while, I went to the graveyard to look for them but couldn’t find them so I went home. It was only when the guys came back that I realised Bully wasn’t with them.”

In his TRC testimony, Austin describes the tragedy of realising Bully had been shot and doing everything he could to save him. He persuaded the owner of the house where they’d been hiding from the police to drive them to hospital.

It was at the triangle in Fitchat Street that Bully died, Bowles believes.

“The police wouldn’t let them through,” Bowles said. By the time they reached the hospital, Bully had died. “I think he actually passed on there at the roadblock.

“We couldn’t believe it had happened,” said Bowles. “And we had to tell Aunty Cecilia and Uncle Robert. It was a terrible, terrible Mother’s Day.”

This year, the anniversary of Bully’s death was particularly poignant because Robert, his father, passed away three days after Christmas  from Covid-19 complications. Bully’s mom, Cecilia, died nearly 20 years ago, in 2003. They are buried together in the family plot at Waainek Cemetery and now Hein would like to bring his brother’s remains back to rest with them.

“Years ago we bought a family plot here,” Hein told GMDirect during a visit to Waainek Cemetery. Our parents are buried together here and now we think it’s time to bring Bully home.”

Funeral parlour owner Ernie Cassels confirmed the request from the Kohl family and said various permissions would have to be obtained, including from the municipality.

Hein hopes that when the next Mother’s Day comes around, his family will be putting flowers on the graves of Cecilia, Robert and Bully, at the family plot. For them, it will be closure – a kind of peace.