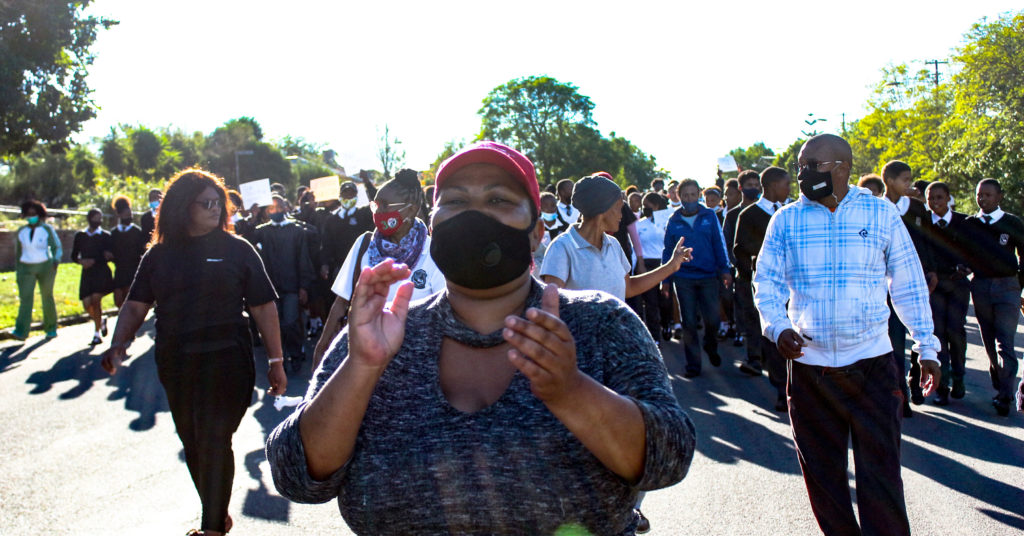 Parents of Mary Waters learners lead their children in a march to the Department of Education offices in Makhanda on Friday 28 May. Photo: Sue Maclennan

By SUE MACLENNAN (text and photos) and ANELISA CENTANE (audio)

Learners and parents at Mary Waters Secondary School are hoping that the visit to the school this morning by a high-level provincial government delegation will resolve the school’s teacher shortage. Learners in Grade 8 and 9 universally failed four subjects at the end of the first term because they had no teachers for them. Last Friday, with no sign of a resolution, around 200 learners, parents and teachers marched to the local offices of the Department of Education to hand over a memorandum with their concerns and demands. The school has been closed for more than two weeks.

Fundile Gade’s Chief of Staff Mzuyanda Sokujika on Monday night confirmed to GMDirect that the MEC, together with officials from Bhisho, would be visiting the school on Tuesday.

“The MEC will be responding to the challenges confronting the school,” said Sokujika. “He is going there to listen and respond to the concerns of the community and the school.”

Asked whether the MEC would respond by providing more teachers, Sokujika said, “If they meet the post-provisioning requirements to receive more teachers, then they must get those teachers.

“However, it is government policy that will be the final arbiter.”

With the MEC’s delegation will be District Education Director Nkosinathi Godlo, who met with the school community on Wednesday 19 May. Last night, he told GMDirect he is optimistic about Tuesday’s meeting.

“I have been fighting for two more teachers for the school – I have put my head on a block for that,” he said.

Godlo said he believes the MEC’s visit is a positive sign.

Around 200 Mary Waters learners marched to the local education offices on Friday 28 May. They carried home-made placards, pleading with the Department to re-open their school by giving them more teachers.

A committee was formed, which met later. A source said the school had been informed that the appointment of two teachers had been approved; however, no time frame had been given.

Mary Waters Secondary School is a dual medium (English and Afrikaans) school. Not only is timetabling very complex, but also not all teachers are able to teach their subject in both languages. Proportional teacher allocation according to learner numbers and subjects, as per post provisioning policies, is considerably more complex than in a single-medium school.

Meanwhile, in Riebeeck East, learners and parents at Riebeeck East Combined School have been demonstrating outside the school since last week. The school has five teachers for 98 learners from Grade R to Grade 9 and parents say they are not enough.

“Especially in the Foundation Phase,” said one parent. Grades R and 1, and 2 and 3 were combined classes with one teacher in each.

“Last week we decided to close the school,” said the parent. On Monday they handed a memorandum to Matyolo and Area Manager Sizwe Betela.

MEC Fundile Gade is scheduled to meet Mary Waters parents at the school on Tuesday morning, along with Godlo and other Education officials.