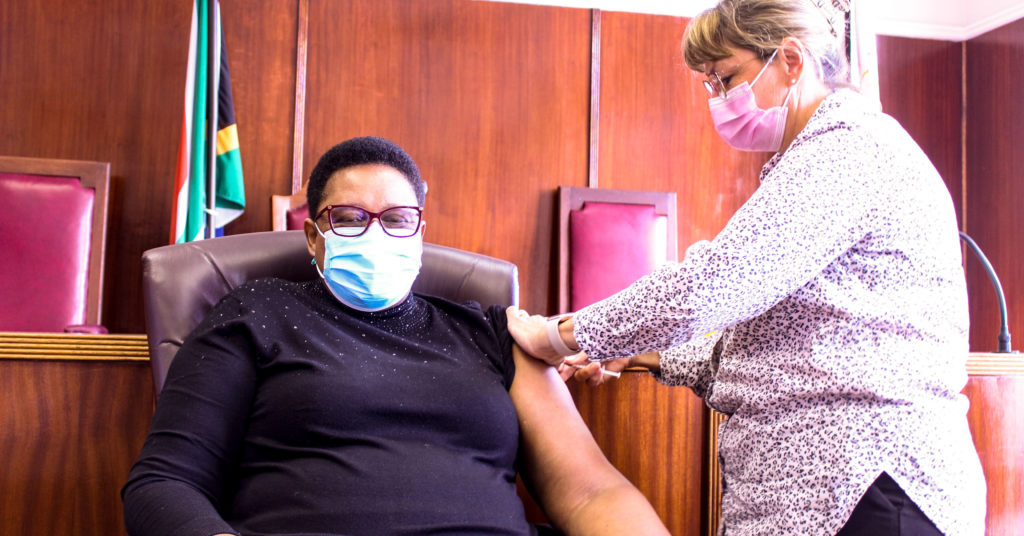 Judge Nomathamsanqa Beshe receives her Covid-19 vaccination from Registered Nurse Patricia Baart at the Grahamstown High Court on Friday 21 May. Judge Beshe was among eight High Court judges who received their first dose of the two-shot Pfizer vaccine as part of the launch of Phase 2 of the national vaccination programme. Photo: Sue Maclennan

There was universal praise for the Department of Health’s efficient and professional operation of vaccination sites in Makhanda as Phase 2 of the Covid-19 vaccine rollout began. However, shortages of vaccines and vaccinators remain a threat in the Province, the DA says.

Covid-19 immunisation got a boost in Makhanda as community leaders and prominent personalities bared their arms for a first shot of the Pfizer vaccine. Settlers Hospital is one of the official sites where Phase 2 of the national vaccination rollout, targeting people over 60 and non-frontline health workers, began on Monday 17 May. On-site vaccinations were administered at retirement homes and the High Court.

By Thursday, 399 of the first batch of 550 shots allocated to the Department of Health’s Makana Subdistrict office had been administered, acting head Mohamed Docrat  told GMDirect. He was speaking on Friday 21 May at the Grahamstown High Court, where eight High Court Judges were lining up for their shots.

“We will finish the first batch today and next week we will receive another 1 110,” Docrat said.

At the high-profile launch of Phase 2 at Settlers Hospital on Wednesday, Health MEC Nomakhosazana Meth said more than 7000 health care workers had been vaccinated in the Province. Of those, 3200 in the Department’s Sarah Baartman administrative precinct had received their shots.

Across the Eastern Cape, 400 000 people had registered for the vaccine, Meth said.

Among those asked to lead by example and get vaccinated were a group of around 20 traditional healers, Makana Mayor Mzukisi Mpahlwa, and four High Court Judges. All of them are 60 years or over.

Ntombethela Tsili is a traditional healer and one of the members of the National Unitary Professional Traditional Health Practitioners of South Africa who came for their vaccinations.

“I’m excited to be getting my vaccination, but also a little bit scared of the needle,” she said. “The children want to see me do it though.”

Makana Mayor Mzukisi Mpahlwa was impressed with the process. “It’s a good feeling,” he said after his shot.

“I had already registered online and I was asked to come today and lead by example. I would like to encourage everyone over 60 to register.

“Of course even being vaccinated doesn’t mean you won’t get Covid,” Mpahlwa said. “It just means it’s likely to be less severe. We must still keep up preventative measures: Keep social distance, wash your hands with soap frequently and wear a mask.”

And on Friday at the High Court in Makhanda, Eastern Cape Judge President Selby Mbenenge was upbeat after receiving his vaccination from Registered Nurse Patricia Baart.

“The needle wasn’t painful at all,” Mbenenge said. “There are some areas where you repose your trust in others and get on with your life: this is one of them.”

Vaccinations for Department of Justice officials had been organised on a centre by centre basis, said Mbenenge, who was full of praise for the Department of Health, organising on-site vaccination.

He said while being vaccinated was an individual decision that should be respected, his hope was that seeing others receive the vaccination and continue with their lives would give hope to the broader population.

“Not bad at all,” Judge Nomathamsanqa Beshe said after getting her first shot of the double-dose Pfizer vaccine.

“I am elated,” she said. It’s a great relief to know that once the vaccine takes effect it will limit the seriousness of a Covid-19 infection. I just wish more people get the opportunity to be vaccinated sooner,” she said.

Knowing she would have some protection from serious illness after the second dose, early in July, was a great relief. The past year had been very difficult, she said.

“It’s difficult, scary and unpleasant to have to keep people away from you – even your colleagues.”

The DA MPL conducted an oversight visit on Wednesday at Bhisho Hospital and Settlers Hospital.

“Both facilities were well prepared and well organised, and vaccinations were in full swing,” Cowley said. “Aside from a few teething problems, such as the Electronic Vaccination Data System (EVDS) referring clients to the wrong facility, the rollout has been fairly smooth.”

However, she said, facility managers at several vaccine sites had already experienced shortages of the vaccine and had to transfer vaccines from other facilities and even other provinces.

“A break in supply could negatively impact the rollout, especially for those travelling far distances to vaccination sites,” Cowley said.

By far, the worst threat, however, was the advent of the third wave of the Covid-19 pandemic.

“Many of the vaccination staff are frontline workers who have been seconded from quiet or empty Covid-19 wards, so if the third wave hits, there will simply not be enough healthcare workers to manage both the vaccine rollout and the third wave simultaneously.”

Cowley said she would write to Meth, to urge her to secure the supply of vaccines so that no shortages are experienced.

“I will also reiterate the importance of filling critical vacant funded posts at district and provincial hospitals to mitigate a potential disaster when the third wave reaches our province.”

Cowley said programmes in the healthcare system must never be compromised in the event of a crisis.

“Planning must include contingencies for a simultaneous vaccination programme and the third wave of Covid-19 so that our citizens and their health are not compromised.”