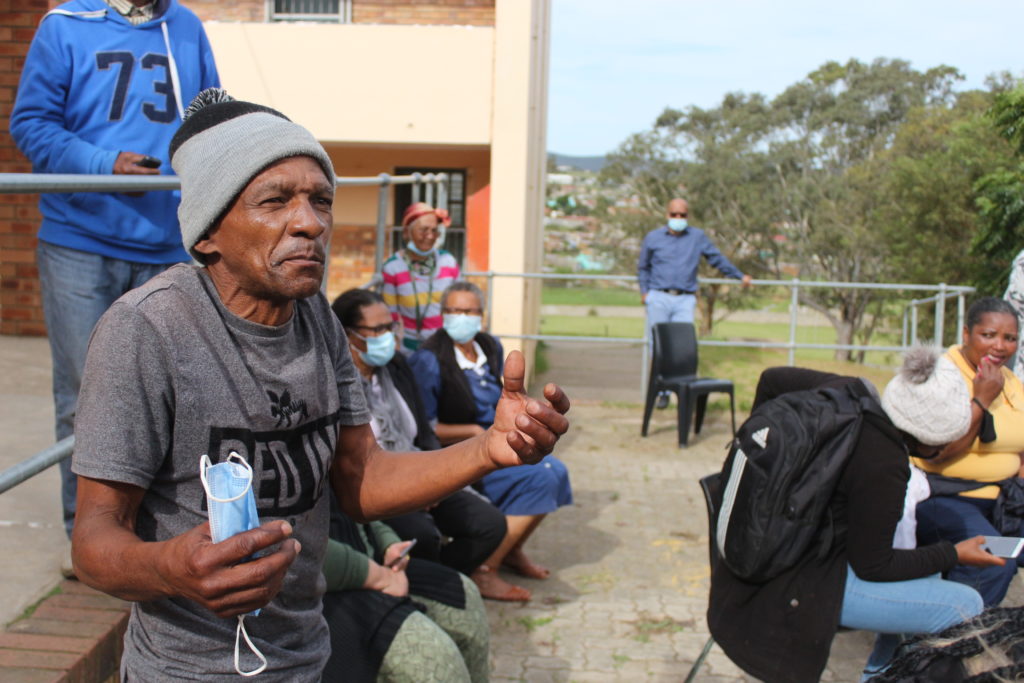 A parent speaks to officials from the Department of Educatiion at Mary Waters Secondary on Wednesday 19 May. Photo: Sue Maclennan

By Friday 21 May, more than a thousand learners at Mary Waters Secondary School will have missed a full week of classes as parents hold firm on their demand for more teachers. This comes after the shock discovery last Friday that Grade 8s and 9s have not been taught four of their subjects since the beginning of the year because of a shortage of teachers. The Department of Education has promised some additional teachers, and said it would ensure there were catch-up classes to make up for lost teaching time.

Parents of Grade 8 and Grade 9 learners protested outside Mary Waters Secondary on Friday 14 May when their children’s term reports showed minus-1 scores for Life Orientation, Creative Arts, Technology and Social Science. In an accompanying letter to parents, acting Principal Estelle Hendricks explained that the minus-1 meant the learner had not completed a formal assessment task for that subject.

“We do not have educators to teach the learners in Grades 8 and 9 in these subjects. We are still awaiting a response from the Department of Education,” Hendricks wrote.

Again they protested outside the school on Monday 17 May. Area Manager Sizwe Betela arrived with other Education Department officials to negotiate with School Governing Body (SGB) and Senior Management Team (SMT) members; however, the school remained closed and parents demanded that District Education Manager Nkosinathi Godlo himself come and explain why the four teacher positions had not been filled.

Godlo, however, was dealing with a similar situation in Somerset East and arrived at the school around midday on Wednesday 19 May to address a meeting of parents, teachers and SGB members. Also attending the meeting were members of the ANC’s recently established constituency office.

At the heart of the conflict is the allocation of teachers to the school in relation to the subjects taught and the number of learners. The Department of Education refers to this as Post Establishment. It’s the process that determines how many teachers (“educators”) are allocated to specific public schools and which learners are taught by which teachers.

The Post Establishment is initially determined by the previous year’s learner numbers. When the new year’s enrolment is finalised, the school can apply for more teachers if their numbers have grown. It can take months for newly required posts to be filled.

Mary Waters Secondary’s teacher allocation for 2021 was based on their 2020 learner total of 1003. That gives them 28 teachers, with another one recently returned to the school after initially being removed as “excess”. Included in this 29 are the Principal, Deputy Principal and four HODs. These should ideally be purely, or mostly, administrative roles. However, GMD understands that at Mary Waters, everyone teaches.

“The teachers are at their max,” said a well informed source. “Some of the teachers are teaching eight out of eight periods a day. Parents come to the school to meet with the principal – only to find they are in a class, teaching.”

Making matters worse for learners and teachers is that this year the school has an enrolment of 1115 – in other words, an additional 100 learners, spread across various grades. Included in this number are seven Grade 8 classes and six Grade 9 classes.

“Altogether from Grade 8A to Grade 12D there are 29 class groups,” the source said. “And there are exactly 29 teachers. What does that tell you?”

GMD understands that the three senior grades have been prioritised when it comes to teachers and that Grades 10, 11 and 12 all have their full complement of teachers, and full school week.

However, Grade 8 and Grade 9 learners are already limited to attending school two days a week, so the fact that they’ve also missed out entirely on four subjects means their school year is compromised.

“It’s the middle of the year and my child is in Grade 9. Obviously he must know in a few months which subjects to choose for Grade 10, 11 and 12. But if he hasn’t been taught, how will he choose his subjects?

“We are not happy because we have just realised now that all the time our children did not have teachers for four subjects,” a Grade 9 parent told GMDirect on Friday. “On top of that, they are only going to school on Mondays and Wednesdays. Obviously that means they will fail.

“We heard that the school has contacted the Department five times, but nothing is happening. Someone at the Department of Education is not doing their job.

“I honestly didn’t realise when he said to me one day that they didn’t have a Technology class that it was because they didn’t even have a teacher. We should have been told earlier. I can’t even take my child to another school: all the schools are full – and anyway which school is going to take my child with that kind of report?”

“I am so absolutely furious,” said a dad. “Not only because my child hasn’t been taught what he was supposed to be taught, but because we weren’t told this was happening. It’s just unbelievable. Why wait to the last minute?”

Worst for parents, though, has been seeing their children become disillusioned.

“He was so disappointed when I gave him his report,” said the mother of a Grade 9. “He was so eager to learn – he was completely on top of his work from the beginning of the year. When I would come home from work, he would talk about what he’d learnt that day.

“But when he got that report, his whole face changed. It’s heartbreaking seeing my child like this.

“Look, it’s a good school and they’ve got good teachers. But it seems like they’re not getting the support they need.”

Please note: Further negotations and interventions between the SGB and the Department were expected to take place on Thursday 20 May and Friday 21 May. For this reason, the responses we report on below refer only to the status quo on Wednesday 19 May.

Speaking to GMDirect on Wednesday 19 May, Godlo said 28 was the correct number of teachers for Mary Waters according to Post Provisioning Norms.

However, Godlo acknowledged that the fact Mary Waters is a dual medium school makes their situation different.

In his address to parents, Godlo initially said the Department would provide two extra teachers, and allow the school to retain the “extra” teacher they had applied to keep. He said he would negotiate on behalf of the school and the parents for another four.

Afterwards, Godlo told GMDirect that he would send a team of Education officials to the school on Thursday 20 May.

“We will work with the SMT on a catch-up plan for the missed classes. We will also do a thorough analysis of the school’s curriculum requirements,” Godlo told GMDirect on Wednesday.

“In our matric year, even one day matters.”

As the midyear exams approach, Grade 12s at Mary Waters are anxious about missing any more classes.

“Look, we’re with them on the fact that the school needs teachers. But even one day in a Grade 12 child’s life has an impact on their performance in the finals – and so on their future.”

Learners had already experience enormous stress as a result of the pandemic.

“Honestly, this is just putting more stress on the learners.”

Another Grade 12 said, “I understand parents are cross and that – but then why stop the higher grades from attending classes?”

Close to tears, he said, “It’s frustrating and depressing, because we see some schools moving forward and we are not.”

Another Grade 12, like her classmates, had come in full uniform and with all her books, fully expecting they would be allowed to continue their classes for the day.

“It’s discouraging,” she said. “This is not how it is supposed to be happening. They could have let us continue classes while they have this meeting.

In Parliament earlier this year, Minister of Basic Education Angie Motshekga, said the national teacher vacancy rate at the end of February was 24 000. In the Eastern Cape, this translated to 3 718   vacant posts. Motshekga told Parliament a total of 50 705 posts had been allocated for 2021.