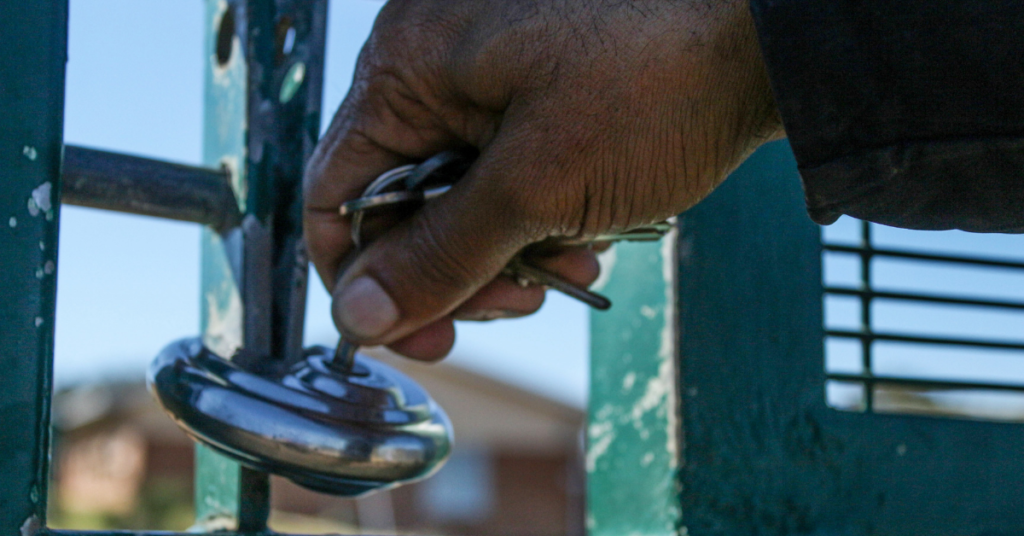 The main entrance gate to Mary Waters Secondary is locked mid-morning on Friday 14 May after angry parents insisted the school close until the teacher shortage is resolved. Photo: Sue Maclennan

Staff and learners at Mary Waters Secondary in Makhanda have an uncertain start on Monday 17 May, after parents saw to it that the school closed last week. Parents of Grade 8 and Grade 9 learners protested outside the school on Friday 14 May when their children’s term reports showed minus-one scores for four subjects. The parents were shocked to discover this was because they hadn’t been taught those subjects, because there were no teachers to teach them. They insisted the school be closed until the crisis was resolved.

Outraged parents told GMDirect that the school is short of teachers for four subjects. As a result, Grade 8 and Grade 9 learners had no classes in Technology, Life Orientation and Creative Arts. Three of the Grade 9 classes had also missed out on Social Science, and two Grade 9 isiXhosa subject classes have not been taught all year.

Making the situation worse is that Grade 8 and 9 learners are only attending school two days a week – Mondays and Wednesdays.

“Then he’ll broke loose [on the WhatsApp group]when parents opened the reports and saw the four minus-ones.

“I said that’s impossible. They just said ‘Open the report and have a look.’

“I am so absolutely furious,” said the dad. “Not only because my child hasn’t been taught what he was supposed to be taught, but because we weren’t told this was happening.

“It’s just unbelievable. Why wait to the last minute? At least if they held a parents meeting beforehand, everyone would know what’s going on.”

Parents shared videos of protesting outside the school gates on Friday morning, and one group of parents tearing up the reports in fury, and throwing them on to a pile.

“We are not happy because we have just realised now that all the time our children did not have teachers for four subjects,” another parent said. “Obviously that means they will fail.

“We heard that the school has contacted the Department five times, but nothing is happening. Someone at the Department of Education is not doing their job,” said the parent.

“It’s the middle of the year and my child is in Grade 9. Obviously he must know in a few months which subjects to choose for Grade 10, 11 and 12. But if he hasn’t been taught, how will he choose his subjects?

“I honestly didn’t realise when he said to me one day that they didn’t have a Technology class that it was because they didn’t even have a teacher.

“We should have been told earlier. I can’t even take my child to another school: all the schools are full – and anyway which school is going to take my child with that kind of report?”

The mother of a Grade 9 said the situation was very stressful.

“It’s not a bad school. I feel the teachers are trying to do their best. But really I don’t know what will happen with this. Something must happen soon though because no school will take our children with this kind of report.

“The Department must really do something now,” she said.

Worst for all the parents, though, has been seeing their children’s disappointment.

“But when he got that report [on Thursday]his whole face changed. It’s heartbreaking seeing my child like this.”

“Shame they bombarded the one teacher [with questions and accusations],” another parent said. “And he did try to explain everything.”

In public schools, teachers (“educators”) are appointed according to post provisioning norms (PPN). This is a system that allocates teachers to schools according to learner numbers. The ratio is initially determined by the previous year’s figures. Then, when the new year’s enrolment is finalised, the school can apply for more teachers if their numbers have grown. It can take months for newly required posts to be filled.

Mary Waters Secondary’s teacher allocation this year was based on their 2020 learner total of 1003. That gives them 28 teachers, with another one recently returned to the school after initially being removed as “excess”. Included in this 29 are the Principal, Deputy Principal and four HODs. These should ideally be purely, or mostly, administrative roles. However, GMD understands that at Mary Waters, everyone teaches.

“Parents come to the school to meet with the principal – only to find they are in a class, teaching,” said the source.

Making matters worse for learners and teachers is that this year the school has an enrolment of 1115 – in other words, an additional 100 learners, spread across various grades.

Included in this number are seven Grade 8 classes and six Grade 9 classes.

“Altogether from Grade 8A to Grade 12D there are 29 class groups,” the source said. “And there are exactly 29 teachers. What does that tell you?”

GMD understands that the three senior grades have been prioritised when it comes to teachers and that Grades 10, 11 and 12 all have their full complement of teachers, and full school week.

“Look, it’s a good school and they’ve got good teachers,” said a parent. ”But it seems like they’re not getting the support they need.”

District Head of Education Nkosinathi Godlo said he would respond to GMD’s questions on Monday 17 May, after he has been briefed by local education officials.

We will add the Department of Education’s response as soon as we receive it.