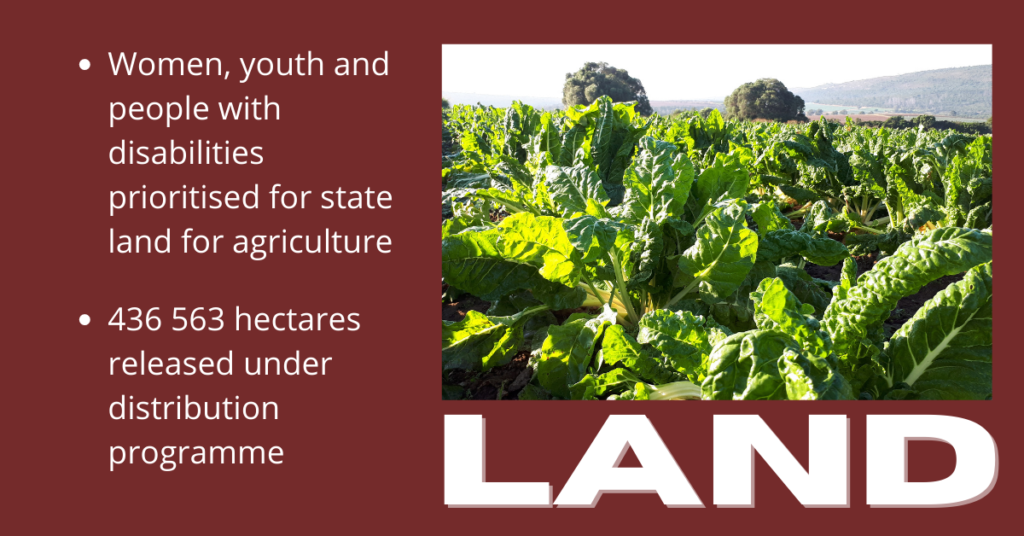 Deputy President David Mabuza says 436 563 hectares of land have to date been released and approved for allocation, under the land distribution programme.

He said this when he responded to oral questions in the National Assembly on Wednesday 12 May.

The release of the land is part of the 700 000 hectares announced by the President in his February 2020 State of the Nation Address.

The Deputy President said further to this, government will be releasing state owned land to address development pressures around urban and rural human settlements, agricultural production, and industrial development.

“The process of releasing state land for agricultural purposes is targeted at vulnerable groups of our society, and will empower women, youth and people with disabilities. To ensure that land is productively utilised by beneficiaries, government is paying attention to the provision of effective post-settlement support. We are focusing on improving coordination of integrated post-settlement packages to beneficiaries of land, including finance, infrastructure and access to water resources for development.”

The Deputy President said, meanwhile, that while a lot of work still remains, government has made significant strides in implementing the recommendations of the Presidential Advisory Panel on Land Reform and Agriculture.

In December 2019, Cabinet adopted a report on the government’s response to the recommendations of the Advisory Panel on Agriculture and Land Reform.

At the time, Cabinet emphasised the need to move with speed in the implementation of the Panel’s recommendations to ensure that government’s land reform programme urgently responds to developmental imperatives of restorative justice, economic inclusion and social cohesion.

“For us, the work of the Panel foregrounded the centrality of the three key pillars of land reform, namely restitution, redistribution and land tenure.

“As we implement the panel’s recommendations, we will continue to pay equal attention to these key policy instruments while ensuring that our approach to land reform does not impact negatively on agricultural production and the economy in general.”

The Deputy President said the Constitutionally-defined path of the land reform programme will continue to focus on balancing the needs of reversing the legacy of land possession and deprivation, with the vision of fostering nation-building, unity and social cohesion. Access to land is an act of social justice that cannot be delayed.

“As government, we are on course in terms of the implementation process. The Inter-Ministerial Committee on Land Reform and Agriculture receives regular reports on the implementation of the Panel’s recommendations, and is responsible for ensuring that Cabinet is briefed accordingly.”

With regard to key legislative and policy interventions, some of the key achievements include, but not limited to:

Previous ArticleClean and green, from res to town
Next Article All the fleamarket fare