‘Shape up or ship out’ SCOPA tells Makana leadership 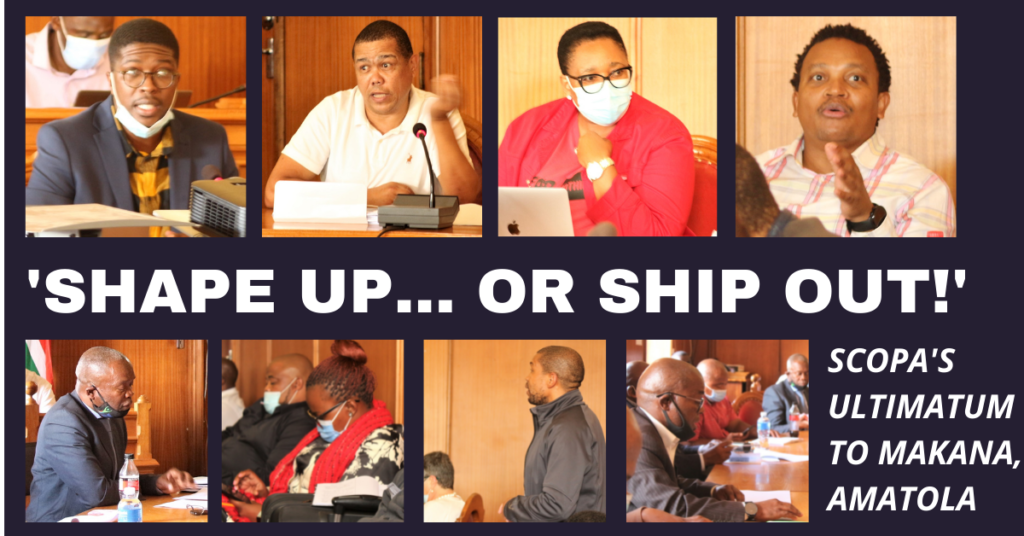 Parliament had Makhanda’s long-running water crisis and Makana’s management practices in its sights during an oversight visit to the municipality this week. Makana was one of five Eastern Cape municipalities Parliament’s Standing Committee on Public Accounts (SCOPA) visited last week.

In a day of relentless questioning, MPs shredded officials from Makana, Amatola Water and the Department of Water and Sanitation. And as if to test the Committee’s assertion that nothing would stand in their way, a deafening thunderstorm exploding midway through the harrowing four-hour probe merely had chairperson Mkhuleko Hlengwa advising those asking and answering questions to “use your rally voice”.

They required no bolstering, but just in case any public official or representative might be tempted not to take SCOPA seriously, members of the Special Investigating Unit, Cogta’s national and provincial offices, and the Auditor General were among those watching, listening and taking notes in the Council Chamber.

SCOPA’s day began with a tour to Makhanda’s main water treatment works north-east of the town, to see the long delayed upgrade in progress. The James Kleynhans Waster Treatment Works is being upgraded to double its production to 20 megalitres a day. The upgrade was delayed when the subcontractor appointed to complete the first phase proved unequal to the task.

Later in the Council Chambers, the Mayor’s report set out the oversight structures and processes in place in the municipality, outlining meeting processes, portfolio committees and special committees.

The visit happened the day before Mayor Mzukisi Mpahlwa and Municipal Manager Moppo Mene were to appear in the Grahamstown High Court to have Judge Miki Mfenyana’s March 2020 contempt of court ruling about the municipal landfill against them realised. It was to have seen them face six-month jail sentences; however the application was withdrawn.

Mpahlwa mentioned the landfill case in his report, and the Unemployed People’s Movement’s (successful) litigation to have Council dissolved and the municipality put under administration.

The MPs’ line of questioning went straight to the heart of administrative accountability.

The chief accounting officer, Municipal Manager Moppo Mene didn’t hesitate to throw his staff under the bus – but Hlengwa was having none of it during questioning about Makana’s regression into two successive audit disclaimers for the past two financial years (2018/19 and 2019/20).

“As the Chief Accounting Officer are you competent?” he asked, looking straight at Mene.

The MM demurred for no more than a few seconds before declaring that his main competence wasn’t in finance and that he relied on the Chief Financial Officer to make sure Makana had a clean audit.

“That’s not what I’m asking,” Hlengwa said. “On your watch there have been two successive disclaimers. I’m asking if you are competent to be in charge here. It is your job as chief accounting officer to ensure the financial statements are properly prepared.”

Mene explained that Makana didn’t have the internal capacity to execute the range of processes required to prepare the institution’s annual financial statements. Among other challenges, the loss of three senior managers had made it difficult to locate key documents.

“You paid R3.2 million on consultants to find documents for you?” the chair asked in disbelief. “You are going to have to try very hard to convince us: it’s not a good picture.”

“You have a fulltime municipal manager and chief financial officer and an audit committee – yet you have consultants appointed to prepare your annual financial statements? Is that not fruitless and wasteful expenditure?

Seated next to Hlengwa, directly facing the House, was CFO Gerard Goliath, who has struggled with Corporate Services (the directorate responsible for HR and appointments) since his arrival in 2018 to get key positions in his department filled. The Mayor, in Goliath’s defence, said that as a result, the CFO had been forced to do work that should have been done by suitably qualified subordinates.

“He has had to be operational rather than strategic,” Mpahlwa said.

Goliath was later given the opportunity to explain measures he had taken to improve capacity in his department, including the appointment of accounting graduates.

Of the consultants, he said, “They can’t work magic: it’s the role of every official in every department to ensure proper record keeping throughout the year.

“If you compare 2020 to 2019 there is much more information [i.e. documentation required for auditing] – at least 90% of it is there. But what is lacking is the quality of the information.”

A disclaimer audit opinion is one where the auditor does not give an opinion about the financial statements of a client. Makana’s disclaimers are because lack of information [i.e. supporting documentation] meant the auditor wasn’t able to complete all the planned audit procedures.

Goliath said he had put in place measures to minimise the problems the Auditor General was raising. Among these was the introduction of controls across departments “so that at the end of the year, there are fewer discrepancies”.

One of the major reductions in fruitless and wasteful expenditure was the fact that Makana’s debt to Eskom had been reduced from R90 million to R50 million.

“We have paid Eskom consistently in the past two years, in full and on time.”

At the end of 2017, the situation was so dire that Eskom issued a notice warning that electricity to Makhanda would be cut off because of Makana’s repeated failure to pay its bills.

Hadebe said officials responsible for fruitless and wasteful expenditure must be identified, reported to the Auditor General and money recovered from them as individuals.

“In the last audit there was R285 million in irregular expenditure,” Hadebe said. “Have you not investigated which officials are responsible?”

The Mayor was asked if he had ensured the Municipal Manager signed a performance agreement.

“No I haven’t,” the Mayor said. The IDP Manager, who job it was to manage performance agreements, had told him he was first waiting for the MM to assess the directors. “I have had no joy in pursuing this.”

An uncomfortable few minutes followed in which Hlengwa instructed the MM to bring the IDP Manager to the Council Chamber to explain this, and it was discovered that the senior manager had in fact left work early that day.

Hlengwa’s final words to the MM were excoriating.

“You are in serious trouble,” he told  Mene. “This laissez faire attitude cannot prevail.

“You have an employee who left work early and no one cares. You are not exerting your authority on the institution,” Hlengwa said.

“This is totally unacceptable. It is inexcusable that you have not investigated a serious matter of this nature and implemented your findings.

“This is people’s money you are dealing with. Assert your authority. Make sure things get done.”

Turning to the Mayor, he said, “Mayor, I can assist you with your performance assessment (of the municipal manager): “It is poor.”

“Shape up or ship out,” he told the Municipal Manager.

SCOPA would provide a report on their oversight to Makana in the coming weeks, he said. Meanwhile, he required all performance agreements to be signed within 30 days.

“Otherwise you will be in contempt of Parliament,” he warned the MM.

Officials from the Department of Water and Sanitation, James Kleynhans waterworks upgrade implementing agent Amatola Water and main contractor Bosch Civils were grilled. In focus was the process involved in awarding the upgrade contracts, and the delays and cost increases that resulted.

Over the 10 years since the project was initiated, the budget has risen from R68 million to R237.5 million. DWS representative Kobus Ferreira explained that this was because of a change of scope to the project.

“Ultimately we want to hear that people are getting water without interruption,” was Hlengwa’s summing up.

GMDirect will report on SCOPA’s questioning about the water upgrade separately.

Previous ArticleCivil society, Opposition call for action after SCOPA flays Makana
Next Article The Festival is back in town (and all over SA… and on your screen!)