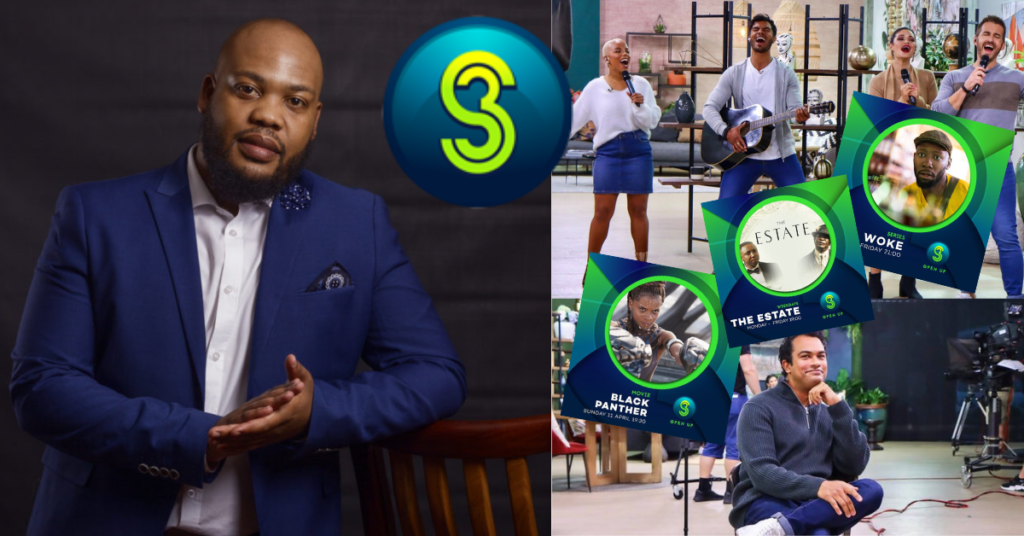 From 5 April, viewers of SABC3 – now S3 – have experienced a fresh new look and feel. The person behind it, Rhodes University Journalism graduate Gino Shelile, shares his vision and explains the process behind rebranding the prime-time television channel.

In March, we were tasked with repositioning one of the SABC channels. Namely, SABC 3. This new look and channel positioning would launch on 5 April, 2021.

The brief was to create a brand identity that would resonate with millennials that were curious, free-thinking and brave enough to pursue their dreams. The scope was quite wide, encompassing the LGBTQI+ community as well as encouraging people to travel more; care more about the environment; and be more tolerant of other religions and societal ideals.

This new brand also needed to move the national broadcaster forward and appeal to audiences that subscribe to international industry-leaders such as Netflix and HBO. The logo, being the key piece of communication for the channel, needed to stand the test of time and not come across as outdated or irrelevant in, say, 5 years time. The pressure was on – to build a channel brand that would hopefully spearhead the evolution of the broadcaster into it’s new era.

The first thing we did was to collapse the age-old SABC 3 naming convention into the modern S3. We did this by simply dropping the “ABC”. It made a world of difference from a logo design point of view. We were now dealing with an acronym that was easier to shape into an icon and cooler to pronounce.

This is where the work began. We had countless logo options and iterations before settling on this. It was a painstakingly long process with many back and forths until all parties involved were happy.

The payoff line “open up” came relatively quicker. You see, to start things off, we had used the eye as our hero. Low hanging fruit really for anyone in a visual industry. Ours was to interpret this differently. In a way, we hoped, had never been done before.

The eye is how we take in the world around us. It is what informs our understanding. It’s how we analyse, criticise and interrogate our environment. This organ is also what inspired the camera lens. The single most important tool in broadcast history.

The camera has undergone an evolution of it’s own in recent. With smartphones and tablets now coming with front-facing cameras everyone has been afforded the opportunity to self-broadcast. To create their own stories and share them with the content.

Broadcasters no longer dictated what people get to see and when. People had a choice. And, with a bevy of new programming on S3, we were hoping that people would choose us.

SABC 3 is transitioning to S3. We wanted the viewers to open up to this journey and receive it well. We wanted them to take in all the new programming that is on offer; we wanted them to accommodate the schedule changes; and to make room for a refreshed prime time.

Opening up should be synonymous with being switched on; unlocked and having the courage to see beyond what is presented at face value.

Ultimately, our vision is to foster the spirit of curiosity and spearhead a generation of free thinkers.

Personally, this is a big deal for me because a channel rebrand is a once-in-a-lifetime opportunity. The SABC is an iconic broadcaster that has been around since 1936. For the first time, SABC 3 will formally be known as S3 and we hope the other stations will follow suit. It is not something to be taken lightly. The fact that I gave S3 its new payoff line “open up” is something I will hold onto forever.

Quite possibly, the greatest achievement in my career to date. A moment I won’t soon forget.

And, I would like to thank the broadcaster immensely for having trusted us with rebranding one of their most important properties. An insane amount of gratitude also goes to the team at Penthouse that worked tirelessy to turn this project around in such a short space of time.

• Shelile Gino Shelile, known as Gino Shelile, is a Witbank-born media creative and executive producer. He pursued Journalism and Media Studies at Rhodes University from 2009 until 2011, followed by a Post-graduate Diploma in Economics from the same institution (2015). Currently, Gino is partner and executive producer at Penthouse Media and is also the founder of Sante Media. Penthouse Media and Sante Media are linked entities.