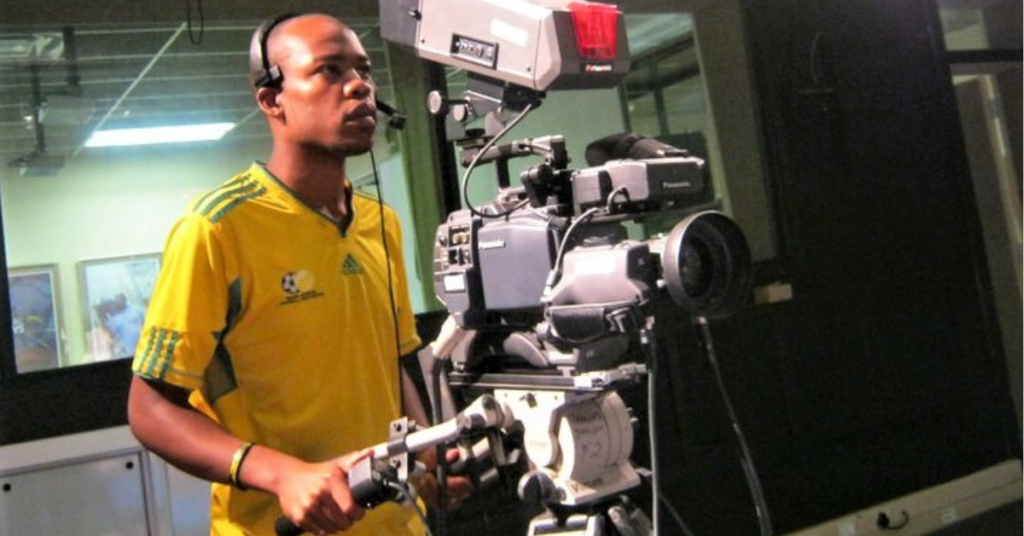 Blast from the past... Gino Shelile during a TV bootcamp at the start of his third year in the School of Journalism and Media Studies at Rhodes. He is the creative force behind the rebranding of SABC3. Photo courtesy Gino Shelile

Gino Shelile is the brains and creativity behind the rebranding of SABC3 which on 5 April launched the rebranded S3. Here he shares some of his memories as a student in Rhodes University’s School of Journalism and Media Studies.

I spent a lot of time filming things that were outside of the curriculum. I would hire equipment from [stores manager]Dees [Naidoo] when I had projects for [TV lecturers] Alette [Schoon] or Paddy [Donnelly] and then use the weekend with the gear to film my own productions. These were usually cheesy profile pieces on the SRC President candidates (e.g. Martin Forsythe); as well as short narratives about mystical Xhosa kings. I really just liked the idea of telling stories in the visual medium.

When I wasn’t abusing the department’s equipment, I could be found at the Rhodes Theatre. I fancied myself a thespian and bagged a couple of leads in productions directed by my seniors at the Drama Department.
The most notable one was Yellowman. It was the first time I got a standing ovation. I don’t think my acting is brilliant. I think they just fell in love with the character and all his flaws.

I knew my thespian days were numbered when Andrew Buckland cast me as a drummer in Moruntodun – possibly the biggest play in 2010/11. Imagine, a drummer with no speaking part! I will forever resent him for that lol 🙂

Anyhow, I have always been comfortable both in front of and behind the camera. I love telling stories and swaying emotions. That’s my thing. I should have been a spin doctor, really.

My first love is writing though. Everything I do stems from writing. I script all of my productions personally and I draft all of my proposals and pitches. My team helps a lot with design. That is where I fail dismally. I am clueless when it comes to Adobe Illustrator and the likes. I tried my hand at Photoshop but it’s not really my thing. I am more of the content guy. What are we trying to communicate? How do we best communicate it?

As we speak, I am scripting some radio promos for the SABC 3 rebrand. I enjoy this part of the process. Creation. The ability to birth something that never existed before is the reason I wake up (when insomnia allows me to sleep).

Rhodes will always have a special place in my heart. Just the design of the university and how it’s an isolated bubble on top of a hill. It cocooned us from the world and really allowed us to blossom without the distractions of big city life.

We were kings of a very small castle. Everyone flourished in their respective departments. I remembered the Andy Leves who studied radio; the Khaya Mthembus who did Drama; Duduetsang Makuse who did Television… they were the superstars in the JMS and Drama Department. I was constantly in awe – wanting to be like them.

Especially Duduetsang. Her and I are from the same town (Witbank, Mpumalanga). I would see them lugging big P2 cameras and tripods everywhere and they looked so cool. I wanted to be that guy. I wanted to be a big deal in the JMS building. I wanted to be known as the TV guy. In my final year, having switched residences from Joe Slovo to Hilltop 3, I got the words “Producer” embroidered onto my res hoodie. It doesn’t fit me anymore. But I think that’s when I actively told the universe to make space for me and my dreams. (I’ll try find that hoodie…)