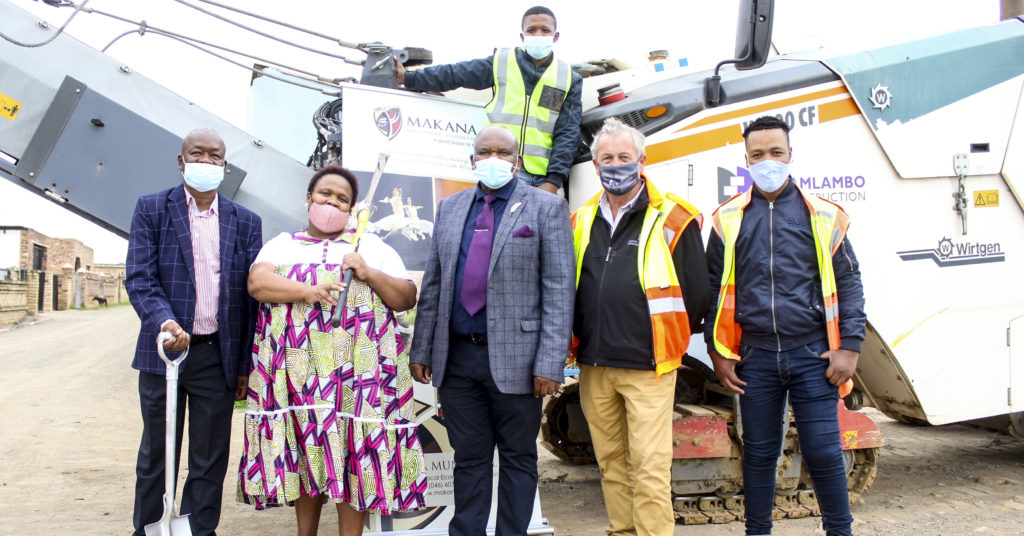 By ANELE MJEKULA
Makana Municipality conducted a sod-turning ceremony to mark the start of the upgrade of Ncame Street in Joza on Monday 12 April 2021.

Ncame is one of the busiest streets in Makhanda, which is why it was among the first roads to be refurbished. The popular road was even busier yesterday as Makana Municipality Mayor Councillor Mzukisi Mpahlwa and Engineering and Infrastructure Services Portfolio Chairperson Councillor Ramie Xonxa led the symbolic ceremony.

This will take time and priority will be given to the busier roads. The road infrastructure in Ncame Street is currently tar and will be resurfaced. The contractor will remove the tar and replace it with paving blocks. The total length of road to be upgraded is approximately 3100 metres, divided into five distinct sections.

The project will also focus on upgrading the storm water system to divert run-off.
Two (2) traffic circles will be constructed, on the Ncame and Nompondo Street intersection as well as on the Ncame and Sani street intersection, for traffic calming as well as ease of traffic flow.
The upgrade of Ncame Street will also include the erection of road signs, road markings and sidewalks which will be constructed on the western side of the street.
The key focus areas of this project are:
• Remove damaged kerbs
• Mill out approximately 160mm by 1m wide slot, to seat new kerbs
• Install new kerbs
• Mill out approximately 100mm of the existing base
• Lay 80mm pavers between the existing/new kerbs
• Demolish existing grid inlet SWMH’s
• Construct new stormwater grid inlet catch pits where required
• Clean existing stormwater pipes
• Lay portions of new stormwater pipes and channels
• Construct side walks
• Construct speedbumps & traffic circles
• Lane marking
• Traffic accommodation

The project is expected to be completed in 72 weeks from the commencement date.
The total budget for the project is
R18 332 367.78.

Makana Local Municipality has committed itself to ensure that 30% of the value of the works (excluding VAT, contingency and main contractors P&Gs) is subcontracted to Micro Enterprises (SMMEs) during the implementation phase as set out in the contract document.

• Anele Mjekula is the Communications Officer at Makana Municipality