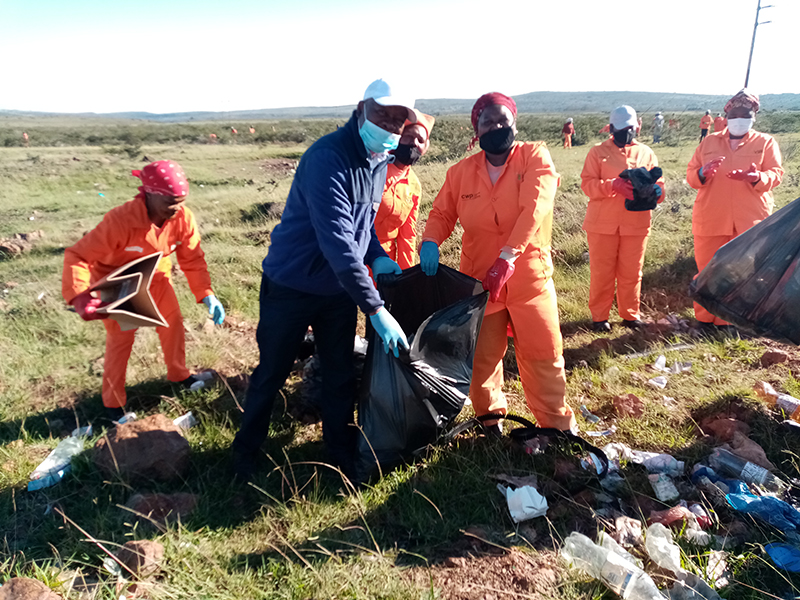 UPDATE:
Fire Chief WIlliam Welkom says the fire was out by 1am with a few tree stumps smouldering in the burnt area. “Monitoring in the area will continue.”

ORIGINAL:
A veld fire that that burnt the entire north slope of Mountain Drive in Makhanda on Sunday 18 April 2021, from west to east, will be monitored overnight. Makana Fire Chief William Welkom said  Water trucks from Rhodes University as well as the municipality were called in tohelp control the blaze which was reported at 1.30pm opposite the SAPS Dog Unit on the south side of the N2.

“A crew was dispatched and on arrival found bushfire fanned by a strong wind,” Welkom said. “The fire spread rapidly in the direction of the Grey Dam.”

Around 6pm, fire fighters were on the road at the top of Mountain Drive in the vicinity of the radio masts.

At 7.30pm, Welkom said, “The Fire is under control with one line still burning. The fire teams are still at the scene and will monitor the fire throughout the night for any flare-ups.”

No injuries were reported. Provincial Traffic and Makana Traffic assisted with Traffic Control.

“All assistance is appreciated,” Welkom said.

Rain is predicted for Monday 19 April but only around 2pm according to the South African Weather Service.