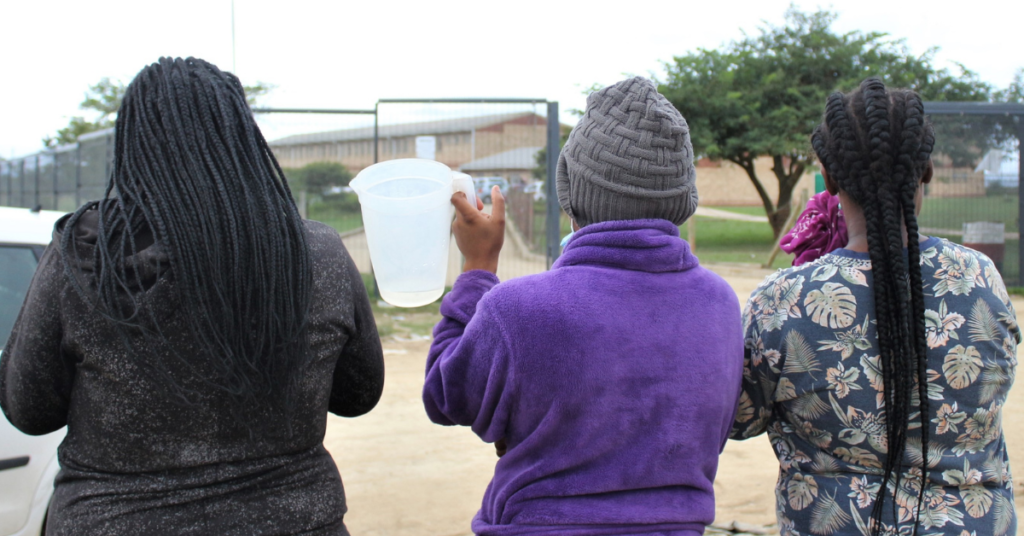 An Extension 7 resident holds up a jug of water she was using to revive fainting Ntsika learners outside the school gate on 12 April 2021. 'Cold water worked well,' she said. Photo: Sue Maclennan

Parents, teachers and education officials will meet at a Makhanda high school early on Tuesday 13 April in a bid to restore calm after a spate of fainting episodes among Grade 12s. Spurred by panicked speculation on social media, the incidents disrupted two school days at the school and the town’s broader education community is concerned about the potential for further disturbances during a crucial period in the academic calendar.

During the morning of Friday 9 April, several learners in one of the Grade 12 classes at Ntsika Secondary School collapsed on the floor, in what witnesses said looked like fainting. Those who had fainted were allowed home to recover; however, that was not to be the end of it.

Posts on a local Facebook group speculated about evil spirits – an idea that was reignited on Monday morning 12 April, when more (mostly) Grade 12 learners again collapsed. Again they seemed to have fainted; this time, however, ambulances were called to take the children to hospital.

Parents rushed to fetch their children as rumours about demons, evil spirits and muthi bubbled over on social media and street corners.

A resident who lives near the school said, “This morning I saw ambulances arriving, police, church ministers and I heard that the same thing happened today at the school that happened on Friday.

“Then when the children were brought outside, the same thing would happen: here in the street, they would just faint again, like that.”

Another resident from the area had walked to the school to fetch her cousin.

The Grade 8 learner was bemused by the morning’s events,

“I don’t know what is happening really,” she told GMDirect. “I just heard that this stuff happened with the Grade 12s and then my cousin came to fetch me.”

A Grade 10 learner, also outside the school, said, “On Friday about 35 learners fainted. Now, today, there have been more than 50.”

GMDirect has not yet been able to confirm from official sources how many learners were affected and in what way, medically speaking, they were affected beyond the fainting.

“I was so traumatised after Friday – I couldn’t sleep and I was crying all night,” the Grade 10 girl said. She and other learners had been in a group, chatting, when GMD approached them.

A man who arrived with his family to fetch his child said, “My child is a student here so I am very very worried about the situation. I’m very scared and I want to know the cause of that. If it is an evil spirit, I so wish that God can protect our children – that’s all.”

At the school, staff were visibly strained as they did their best to reassure anxious parents gathered in the parking area.

Inside the school building, parents of the Grade 12s clustered around the door of the classroom where the first incidents occurred on Friday.

They listened as a senior education official addressed them. Among those present were priests, a sangoma, social workers, counsellors and Department of Health officials, along with a long-retired principal who came to offer support. “Our school had this thing of spirits and we solved it in two days,” the retired principal said.

On Monday morning, District Director of Education Nkosinathi Godlo said he had not yet been briefed in detail.

“What I have been informed is that something caused some of the learners to faint during school,” he told GMDirect in a brief telephone interview on Monday 12 April.

“A number of stakeholders had been asked to come to the school [Monday] morning, including Education Department officials, parents, ministers of religion and counsellors.

“While they were there, there was a repeat of the same kind of incident,” Godlo said.

Learners had been allowed to go home and anxious parents rushed to the school to fetch their children, Godlo said.

Parents, teachers and other stakeholders would meet early on Tuesday 13 April to map out a return to calm among the learners.

Support for the Ntsika community

Ntsika Principal Madeleine Schoeman is currently on leave and was not available for comment. At the school, senior staff were attending to learners and engaging with parents and it wasn’t appropriate to approach them.

For perspective, GMDirect spoke to senior educators at four other schools whose learners come from closely linked communities.

While some learners at their schools had spoken about the Ntsika incident, the environment remained calm at all three institutions.

What all three of these schools were experiencing, however, was considerable pressure on the teachers and learners.

“All the learners are busy with their final tests for the term. There is a lot more stress than usual – and there’s a lot of pressure on the Grade 12s especially.”

Because of uncertainty about the Covid-19 Third Wave and when it might force schools to close again, as well as the late start to the school year, many schools were pushing hard to work through the curriculum.

“And the learners are pushing back. And that’s across all the schools,” they said.

Added to this was simmering political tension – in the town, but also nationally – as forces gathered ahead of the local government elections.

At another school, a senior teacher said, “We’re just so busy with classes and tests, I don’t think anyone even had time to think about [the Ntsika incidents].”

At another school an SMT member said, “So far we are calm here and I hope it stays that way.”

PJ Olivier Principal Joubert Retief said because the town is a small community, events at one school concern every school.

“When something happens at one school in Makhanda, it affects us all. A phenomenon like this often spreads to other schools, because of social media and because all our learners come from the same community,” Retief said.

“As members of the education community, we support Ntsika and we stand by them as they deal with this difficult situation.”