‘He was so happy that day’ 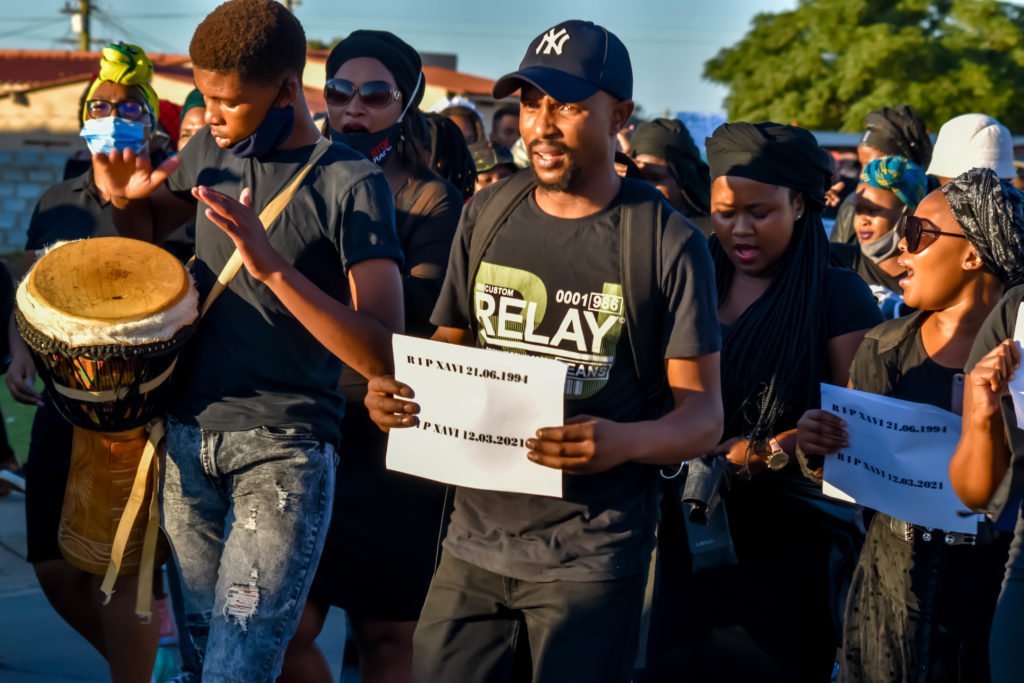 Friends of Siphamandla Mdilitwana took to the streets on 18 March to mourn his death. Photo: Luthando Mpofu

“I saw my son lying there. There were so many cars parked around there – maybe if they took him to hospital as soon as it happened he would be alive.

“But they didn’t. They were just watching.”

Siphamandla Mdilitwana died at Cool Spot tavern in Joza on the night of Friday 12 March 2021. He was just 26.

“My child was so sweet,” his mother said. “You never heard from neighbours, or his fellow students, about anything that he ever did wrong to anyone.

“Where was God when that happened?”

Siphamandla’s mother is receiving counselling and has been booked off work for two months. She spoke quietly as she sat hunched in the living room of the family home, less than a kilometre from where her son died that night. She has asked not to be named here to protect the family’s privacy.

“I have so many questions,” she said. “I don’t understand why this guy did that to my son.”

Siphamandla had dreams for his family, his mom said.

“He told his granny that when he finished school he was going to work and build a house for her.

“I didn’t know my son’s life was going to end like this. I always thought he would be the one to bury me… and now I have buried him.

Earlier on the day Siphamandla died, he was outside at home with friends, listening to music.

“He loved music. And he loved friends. He was so happy that day.”

Everything since that night has been a nightmare of horror and despair for the family.

“My little sister got a call from the police that night to say my son was stabbed at Cool Spot,” Siphamandla’s mother recalls.

“We went there straight and on the way I was calling the ambulance. I thought we must get him to hospital quickly.

“But when we got to that place, it was full of police and my son’s body was covered.

“I saw my son lying there. It was so terrible and so painful.”

What hurt her most was that there were dozens of cars parked in the area.

“Maybe if someone had taken him to hospital immediately he would still be alive. But they didn’t. They were just watching.

“I ask, why, God? Why Siphamandla?

“He was not a bully. He made people happy. He never did anything wrong to anyone.”

Born in the year of South Africa’s first democratic election, 1994, SIphamandla attended Archie Mbolekwa Primary and then Nombulelo Secondary. His peers from both schools speak of him with affection.

He played striker (number 7 or 8) for Santos – a soccer team made up largely of players who lived in the area and enjoyed enthusiastic support when they played at JD Dlepu stadium, just a few metres from the family home.

Siphamandla would have turned 27 on 21 June, the week of his graduation ceremony at the University of Fort Hare, where would have been awarded a BA with Criminology as his major.

On the day he died, SIphamandla asked his mother for taxi fare to go and fetch his results.

“I’ll be okay but I don’t know when,” his mother said. “Maybe when my child’s killer is found.”

Police spokesperson Captain Khaya Tonjeni said there had been no arrest yet.

Previous ArticleSecond phase of mass vaccination to begin on 17 May
Next Article Dear Lord, may all these days be sanctified