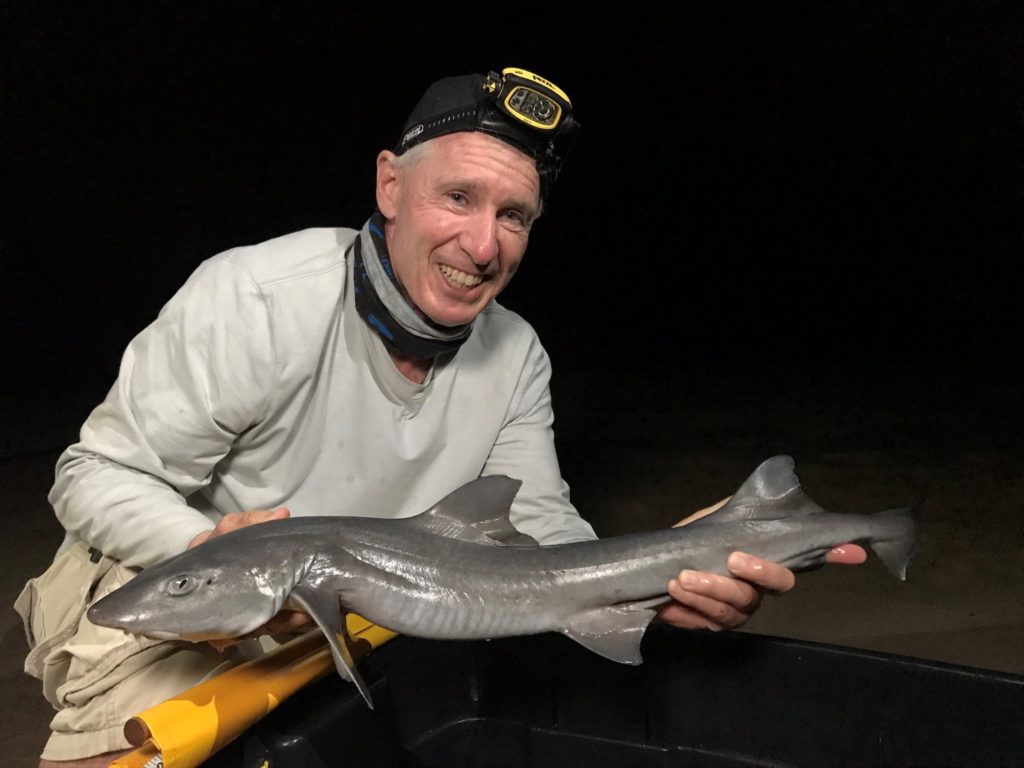 David Ebert and the Flapnose Houndshark taken in 2020 in KwaZulu-Natal, South Africa. This  shark was tagged and released for the Shark Week programme, 'Extinct or Alive: Land of the Lost Sharks'. Photo supplied

A researcher at Makhanda based SAIAB has produced a first ever dedicated checklist of South Africa’s chondrichthyan fauna. The up-to-date list of all sharks, rays, skates and ghost sharks that occur in South African waters also details their distribution and current International Union for Conservation of Nature (IUCN) Red List status. Lucky Dlamini reports

Research Associate to the Makhanda based SA Institute for Aquatic Biodiversity David Ebert ‘An annotated checklist of the  chondrichthyans of South Africa’, provides a current list of all sharks, rays and ghost sharks  that occur in South African waters.

Ebert is popularly  known as ‘the lost shark guy’, is spearheading global efforts to discover new and little known sharks.

The checklist is a quick one-stop reference to the species found in South Africa, their distribution and their current IUCN Red List status. Their current scientific names and the historical names are listed.

The South  African Department of Environment Forestry and Fisheries (DEFF) recently released the  official report on the National Plan of Action for the Conservation and Management of  Sharks (NPOA-Sharks) in South Africa.

It makes us wonder what other species are  disappearing or have gone extinct without us even knowing they existed.

Classifying and naming species (taxonomy) is integral to wildlife conservation and provides the bedrock for our understanding of sharks. To develop proper conservation or management policies, it is vital to know what species exist and how they are related. This helps scientists understand their role within the ecosystem.

Ebert is one of the world’s leading shark taxonomists. He said when he started working  with the IUCN Shark Specialist Group 20 years ago, there were Red Listed species “that did not even exist”. The scientific names had been synonymised and the species were no longer valid.

“Known species that should have been assessed were not being assessed.”

Management and conservation of sharks is hindered by a lack of data. Information on the population status and impact of fisheries on sharks is sparse because sharks are mostly caught as bycatch and Ebert’s checklist is critically important to improve conservation and management policies.

“Many of the lesser-known species, those that I refer to as Lost Sharks, may be disappearing before our eyes without anyone paying any  real attention,” said Ebert. “For example, two sawfish species were historically known to occur in SA  waters, but none have been seen since 1999. It makes us wonder what other species are  disappearing or have gone extinct without us even knowing they existed.”

There is still much more to be discovered about these ‘lost sharks’ – including what repercussions on the environment have resulted from their absence.

Combined with the most recent IUCN Red List assessment, Ebert’s checklist provides a foundation for future research and improved conservation and management policies. This is particularly important because South Africa has a high number of  endemic species.

“It is crucial for shark conservationists to know the names of the species  they are trying to develop conservation plans for,” said Ebert.

South Africa is one of the top five global hotspots for chondrichthyans, following Australia, Indonesia, Japan and Brazil. South African waters harbour 191 chondrichthyan  species and one-third of the global fauna. Of these, 70 are endemic to southern Africa, meaning they are unique to these waters.

One of the unique shark species which only occurs in South Africa’s waters and is listed is the Shy Shark (Haploblepharus). Other endemics include the Flapnose Houndshark (Scylliogaleus quecketii) and the Ornate  Sleeper Ray (Electrolux Addisoni). These two species occur along only a few hundred  kilometres of our coastline – and nowhere else in the world.

According to Ebert, 45%  (50 of 111 species) of all shark species and 33% (24 of 72 species) of all ray species in South  African waters are at risk of extinction. These numbers vividly highlight why it is important  to know what species occur within South Africa.

These two species occur along only a few hundred  kilometres of our coastline – and nowhere else in the world.

Shark research in South Africa goes back to the early 1800s.

South Africa’s next newly named shark species will be published  in the next issue of the journal Marine Biodiversity, adding one more species to the South  African fauna.

Are there still more new species to be discovered in South African waters?

Ebert believes there definitely are.

Who supported this Dave Ebert’s research

Support for this project was provided by SAIAB, the South African Shark and Ray Protection Project implemented by WILDOCEANS (a programme of the WILDTRUST) and funded by the  Shark Conservation Fund, which supported Ebert in the compiling and writing this  monograph.

Dr Angus Paterson, Managing Director of SAIAB, said, “The monograph is an outstanding contribution by Dave, but represents only a fraction of the role he has played in South Africa  and global shark conservation. Dave was one of SAIAB’s fifth set of PhD graduates in 1990 and has been a keen research associate ever since. Thirty years later, SAIAB and South Africa are  fortunate to have one of the world’s leading shark specialists taking such a personal interest  in our shark fauna.”

“It was a privilege for the WILDOCEANS’ Shark & Ray Protection Project to contribute to this  product and to support the amazing work of David Ebert,” said Dr Jean Harris of the  WILDTRUST. “This is the first published paper linked to the project – which is hugely exciting  for us and South Africa. Considering that sharks and rays are one of the most endangered  taxa on the planet and South Africa has the opportunity to be a sanctuary for the species,  this valuable product could not have come at better time.”

A monograph of this magnitude was the result of decades of research and help from  numerous people, and Ebert thanks all those who have shared their knowledge and  information.

He said, “There are several people and organizations who were especially helpful to me in  getting this monograph through to fruition. At the top of the list is my good friend Paul  Cowley, who I started out with on this journey to study South Africa’s shark fauna 35 years ago. Roger Bills and the collections staff at SAIAB, especially Mzwandile Dwani, Nkosinathi  Mazungula and Vuyani Hanisi who were instrumental in helping me access specimens in the  SAIAB Collections Facility. A big thank you to Angus Paterson and Alan Whitfield for their  research support over the past 10 years. Elaine Heemstra for patiently answering my  numerous pesky questions on specimens she and her husband, Phil, had collected. My good  friends and colleagues, including Robin Leslie and Sheldon Dudley (DEFF), Bruce Mann and  Sean Fennessy (ORI), Geremy Cliff (Sharks Board), and Rhett Bennett and Dave van  Beuningen (Wildlife Conservation Society, South Africa). Finally, I want to give a big thanks to  my co-authors, Sabine Wintner and Peter Kyne, for their huge efforts and knowledge in compiling this monograph.”