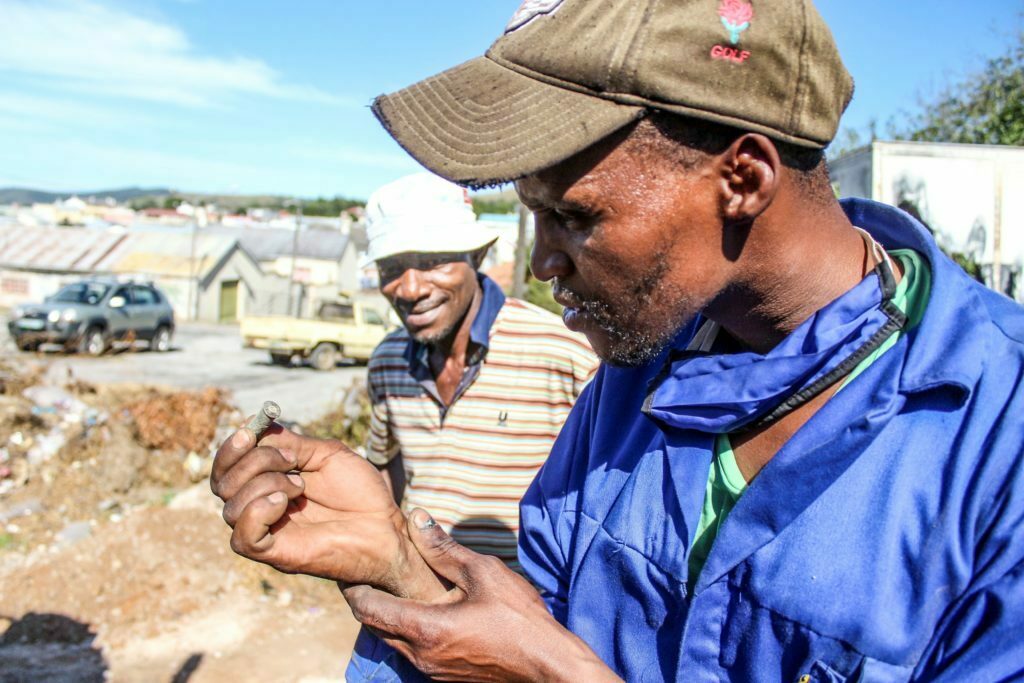 Vuyisile Teyi examines one of the bullets he uncovered in the Dundas Street parking area last weekend. Photos: Sue Maclennan

A team putting up palisade fencing to protect electrical infrastructure in the Dundas Street municipal parking area came across a large cache of bullets and cartridges during their digging last weekend. The construction was ordered and paid for by a local businessperson after copper thieves vandalised a municipal electrical installation, leaving shops in the area without power for a period.

Holding up one of the bullets, team member Vuyisile Teyi said, “I was digging a hole for one of the support poles over there in the corner and next thing I started finding these.”

Teyi called his co-workers over to look.

Building contractor Stavie Van Aardt later told GMDirect, “They called the police and it was very dramatic when they did come.”

No fewer than three vehicles sped into the empty parking lot and pulled up.

What Teyi  handed over were two five-litre water bottles full of rusty bullets and casings. The were dated 1896 – which matches the period of the South African War.

“They said they would take them to the museum,” Teyi said.

Wikipedia says one of the elements on a headstamp is a letter, number, or alphanumeric code that tells you where the ammunition was manufactured. Other codes may indicate metal suppliers or the percentage of copper in the alloy the cartridge case is made of.

The headstamp on the cartridges is 1896 (the year they were made) and K&C. GMDirect’s amateur research matches up these initials with Keller & Co – a manufacturer in Hirtenberg, Austria.

The bullets were found between an old stone wall and what Curator Emeritus at the Albany History Museum, Fleur Way-Jones, says was probably an armoury.

“An armoury has been suggested,” she said. “The shape is similar to [the armoury]at Fort Selwyn.”

Both are on the property of a large double-storey building and an adjoining cottage.

…about the history of the bullets or the buildings in the area and if you do, we’d love to hear from you. Please WhatsApp 066 156 2956 or email community@grocotts.co.za