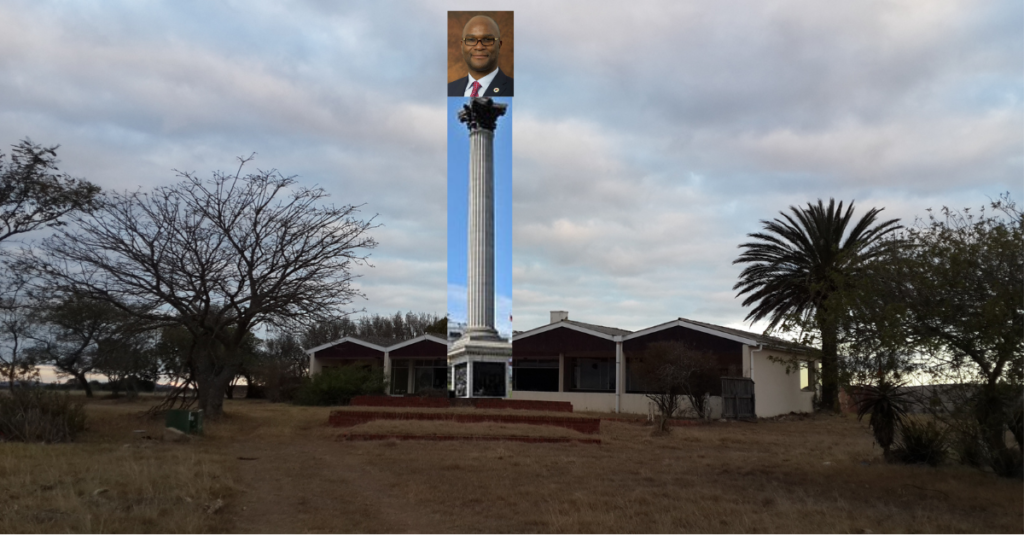 Artist's impression of the 31-metre statue to be unveiled on Heritage Day 2021 at the site of the old golf club in Makhanda. Please note: this is a manipulated image and the Minister is not in fact currently in Makhanda. Additionally, the buildings in this photograph no longer exist. And the column pictured here is not actually at the old golf course. It is merely an artist creating the false impression that this is the case.

Tea with members of the Makana War Club, mock-firing a cannon that will be relocated from Fort Selwyn to Sugarloaf Hill, and a dip in Grey Dam are some of the activities Prince Harry and Meghan Markle are looking forward to during their Heritage Month visit to Makhanda. A high-security luxury suite is being customised  in a secret location in the CBD for the family that will by then number four, as the town prepares for their three-day stay in September.

The Royals will be in town to unveil a 31-metre statue of Arts and Culture Minister Nathi Mthethwa to be erected on the old golf course, west of Makhanda.

Preparations have already been made for the laying of the statue’s foundations through the brick by brick removal of the former clubhouse, and the new monument’s backers are confident it will be completed well before Heritage Day 2021, 24 September.

“We wanted to acknowledge the extraordinary contribution of the Minister to the wellbeing of artists, and the cultural sector in general, particularly over the past few tricky months, while at the same time taking the time to sign off on the gazetting of changes to various place names,” said Delusia von Grande, Emeritus Professor in Social Fictions, based in the town formerly known as Bathurst.

“Our brief to the designers was ‘Go big – or at least bigger than Rio de Janeiro – by at least one metre, maybe more’.

“We want people to be able to see it from Carlisle Bridge – even Bedford,” said Von Grande.

For the unveiling ceremony, a jam-packed programme will unfold in a giant marquee to be erected on the site of the old Grahamstown Golf Club.

The last surviving member of a formerly vibrant local development theatre troupe will give a performance of Samuel Becket’s ‘Waiting for Godot’. In an amazingly generous gesture, she has volunteered not only to perform for free, but to play the parts of no fewer than four characters – all by herself! The fifth character, Godot, will be played by none other than the Minister himself!

Talented singer noPlace Likhome will tune in via Zoom to give a heartfelt rendition of the Proclaimers’ ‘And I would walk R300 million miles’. Her performance will also be for free.

And an extended improvisation on John Cage’s ‘Four Minutes, thirty three Seconds’ will see Makhanda-born pianist with world-class potential Forget ‘Fingers’ Faltein quite possibly wait forever to hear the outcome of his application for funding to continue his music studies.

Harry and Meghan’s second child, a daughter, is due later this year. She will be eighth in line to the throne.

Details of security arrangements for the Royals’ visit to Makhanda leaked to the Makana Sharp team indicate strong concern over a “Corgi Threat”.

Asked to comment on the new addition to the family, Harry and Meghan’s visit to Makhanda, the “Corgi Threat” and the 31-metre statue of Nathi Mthethwa, Queen Elizabeth said, “We are not amused.”

We are not amused.

Previous ArticleSomeone who loves them enough
Next Article Local is better!