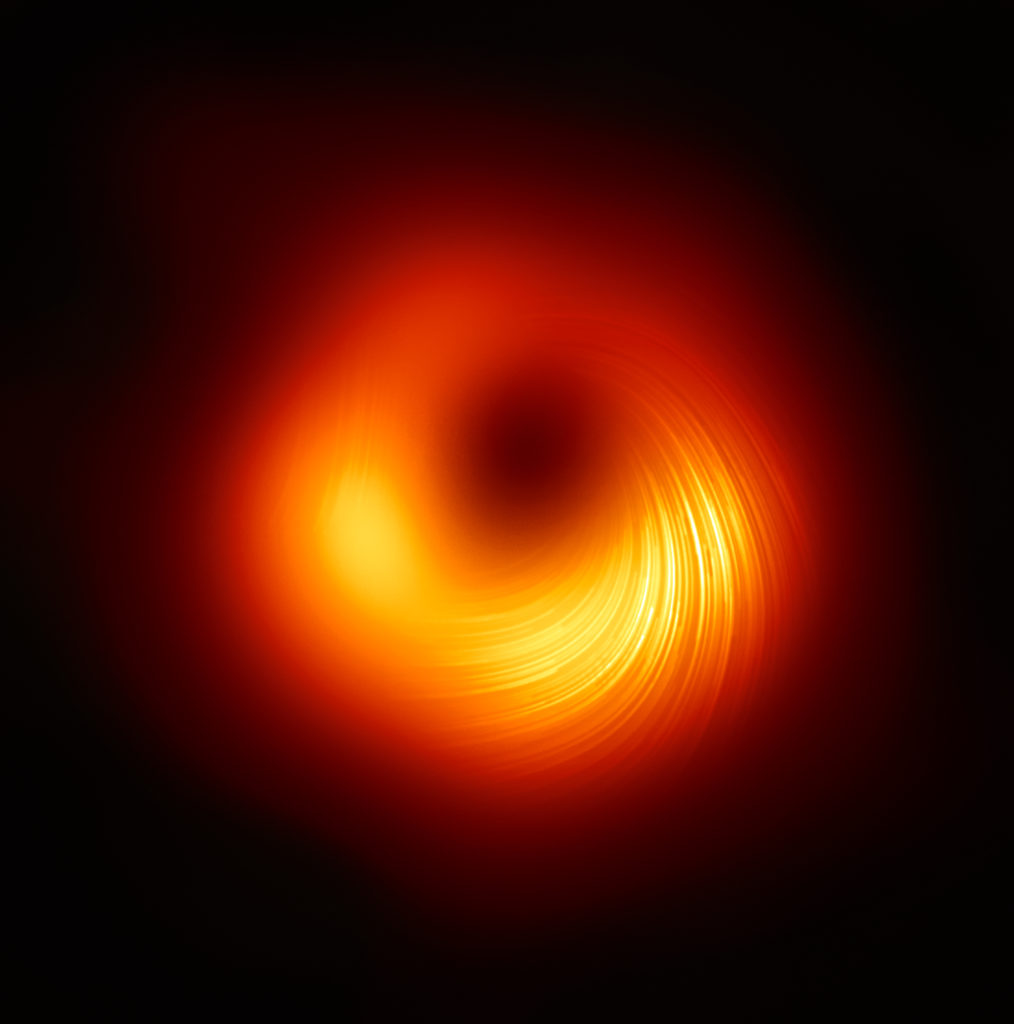 A view of the M87 supermassive black hole in polarised light. The lines mark the orientation of polarisation, which is related to the magnetic field around the shadow of the black hole. Photo: EHT Collaboration

The Event Horizon Telescope (EHT) collaboration, which produced the first ever image of a black hole, has revealed this week a new view of the massive object at the centre of the M87 galaxy: how it looks in polarised light. EHT collaboration members Dr Iniyan Natarajan and Prof Roger Deane, both with roots in Rhodes University, were involved in this discovery.

This is the first time astronomers have been able to measure polarisation, a signature of magnetic fields, and this close to the edge of a black hole. The observations are key to explaining how the M87 galaxy, located 55 million light-years away, is able to launch energetic jets from its core.

“We are now seeing the next crucial piece of evidence to understand how magnetic fields behave around black holes, and how activity in this very compact region of space can drive powerful jets that extend far beyond the galaxy,” said Monika Mościbrodzka, coordinator of the EHT Polarimetry Working Group and Assistant Professor at Radboud Universiteit in the Netherlands.

“This work is a major milestone: the polarisation of light carries information that allows us to better understand the physics behind the image we saw in April 2019, which was not possible before,” explained Iván Martí-Vidal, also Coordinator of the EHT Polarimetry Working Group and GenT Distinguished Researcher at the Universitat de València, Spain. “Unveiling this new polarised-light image required years of work due to the complex techniques involved in obtaining and analysing the data,” he said.

On 10 April 2019, scientists released the first ever image of a black hole, revealing a bright ring-like structure with a dark central region — the black hole’s shadow. Since then, the EHT collaboration has delved deeper into the data on the supermassive object at the heart of the M87 galaxy collected in 2017 and have discovered that a significant fraction of the light around the M87 black hole is polarised.

“When unpolarised, the oscillations of the electromagnetic fields have no preferred direction. Filters such as polarised sunglasses or magnetic fields in space, preferentially let the oscillations in one direction pass through, thereby polarising the light. Thus, the polarised-light image illuminates the structure of the magnetic fields at the edge of the black hole”, says Dr Natarajan, who was a Postdoctoral Fellow at Rhodes University’s Department of Physics and Electronics and was part of the EHT Polarimetry Working Group.

The bright jets of energy and matter that emerge from M87’s core and extend at least 5000 light years from its centre are one of the galaxy’s most mysterious and energetic features. Most matter lying close to the edge of a black hole falls in. However, some of the surrounding particles escape moments before capture and are blown far out into space in the form of jets.

“The newly-published polarised images are key to understanding how the magnetic field allows the black hole to ‘eat’ matter and launch powerful jets,” said EHT collaboration member Andrew Chael, a NASA Hubble Fellow at the Princeton Center for Theoretical Science and the Princeton Gravity Initiative in the US.

The observations suggest that the magnetic fields at the black hole’s edge are strong enough to push back on the hot gas and help it resist gravity’s pull. Only the gas that slips through the field can spiral inwards to the event horizon.

To observe the heart of the M87 galaxy, the collaboration linked eight telescopes around the world, to create a virtual Earth-sized telescope, the EHT. The impressive resolution obtained with the EHT is equivalent to that needed to measure the size of a cricket ball on the surface of the Moon.

The results are published today in two separate papers in The Astrophysical Journal Letters by the EHT collaboration. The research involved over 300 researchers from multiple organisations and universities worldwide.

“The EHT collaboration developed new techniques for analysing the polarisation data, which were validated on simulations before being applied to real observations. Such challenging projects provide the opportunity to develop techniques which later find wider applicability in the community in ways which can pleasantly surprise us,” Dr Natarajan concludes.