A glimpse of the Sherry enigma 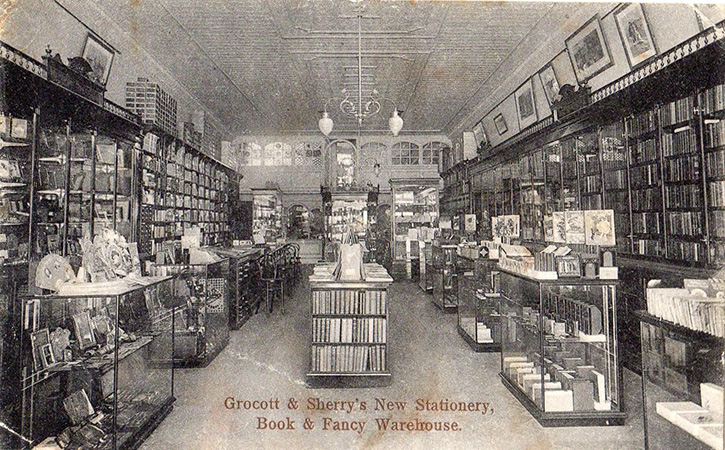 The names ‘Grocott’ and ‘Sherry’ interlocked with each other and with the everyday life of Grahamstown residents through most of the 20th century. The company printed books, produced rubber stamps, sold stationery and provided news on the pages of Grocott’s Mail for much of the Albany district.

When we published the history of Grocott’s Mail last year to celebrate the newspaper’s 150th anniversary, we had little to say about Sherry beyond that he was an ‘enigmatic man’ who worked very hard. How was it possible that so little was known about a person who played such an institutional role in the formative years of this town?

Richard Grant Sherry, the grandnephew of (the Grocott and) Sherry came to our rescue by sending us an article written in 1985 by his uncle, Stanley Percy Sherry, that filled in some curious details of the family’s history. The story below is based on that account:

The mists shrouding past generations of the Sherry family began to clear when Richard Henry Sherry was born in November 1839. He was the second of five sons of fathered by John Pavey Sherry of London.

One of the five emigrated to America, one to Australia, two remained in London and only Richard Henry chose South Africa. He fell in love with Henrietta Birch Wieland but as he was a ‘rather impecunious bank employee’, her father withheld his permission to marry.

Richard Henry and Henrietta decided to elope to the Cape Colony when he was offered a post at a bank in Cape Town. They were married by the captain of the ship that transported them to South Africa in 1862.

Their marriage produced three sons: Richard Harry was born in Cape Town in 1863; there is uncertainty about the place and date of birth of their second son, Ernest Hamilton; but it is known that their third son, Stanley Percy was born in Grahamstown on 16 September 1869.

Stanley Percy was born one day after his father, Richard Henry, died shortly before he would have turned 31.

Richard Harry would eventually become the Sherry of ‘Grocott and Sherry’ – but why was it so difficult to find information about him? When we published the feature on the 150th anniversary of Grocott’s Mail, we wrote:

“In 1892, Richard Sherry, who started at Grocott’s at a very early age and who ‘displayed acute business acumen’, was appointed partner in the firm and the company became known as Grocott and Sherry. He was an enigmatic figure. Little of him is known other than that his wife (unnamed) died after they had been married a very short while and that he never remarried but dedicated his life to the company until his death in 1931”.

Perhaps one of the reasons it was so hard to tie down any information about Richard Harry Sherry is because during his lifetime he was known by his middle name – ‘Harry’ or ‘Uncle Harry’.

The account by Stanley Percy Sherry confirms that Harry did indeed start at the Grocott’s establishment “at a very early age” – he was only nine years old when he began running errands as an office boy.

He clearly did very well at the company and was able to help his widowed mother make ends meet. His brother Ernest also left school early, but his youngest brother Stanley Percy was able to continue his schooling until at least the age of 12.

The owner of the company, Thomas Henry Grocott, was so pleased with the progress of his protégé that he made the young man a junior partner in 1892 and the company’s name was changed to Grocott and Sherry.

Harry worked hard, but also found the time to further his education – reading widely and even writing a novel, “Irene or the dual face” under the nom de plume, Harold B. Arnecourt. After becoming a partner in the company, he was able to buy a large piece of land on the corner of Bathurst and Lawrence Streets where he built a fine house in preparation for his marriage.

Already well into his thirties, he married Claire Lester who was according to Stanley Percy, “a very lovely girl, to judge by a picture of her”. Their marriage was short-lived and childless, as Claire died in December 1904, when they had been married for just over four years.

“Uncle Harry went into mourning for her and never wore anything but black suits, with a white, starched shirt, wing collar and a black bow tie until his death in 1929.”

After the death of his wife, Harry lived with his mother, Henriette, until she too passed away in July 1920. Known by the writer of our article as ‘Granny Sherry’, she died just a month before her 80th birthday.

He lived alone in the house after her death and although the house has obviously been renovated several times, it still stands today.

Not having any children of his own, Harry left a substantial legacy to his youngest brother who could then afford a first class education for his nephew, Stanley Percy.

Stanley Percy, who wrote the account that this article is based on, is the author of a book titled, ‘The black wattle (Acacia Mearnsii de Wild)’.

His brother Douglas Alan was the father of Richard Grant Sherry – the man who brought this article to our attention.

We are grateful to Richard Grant Sherry and trust that he enjoys his retirement in Cape Town.