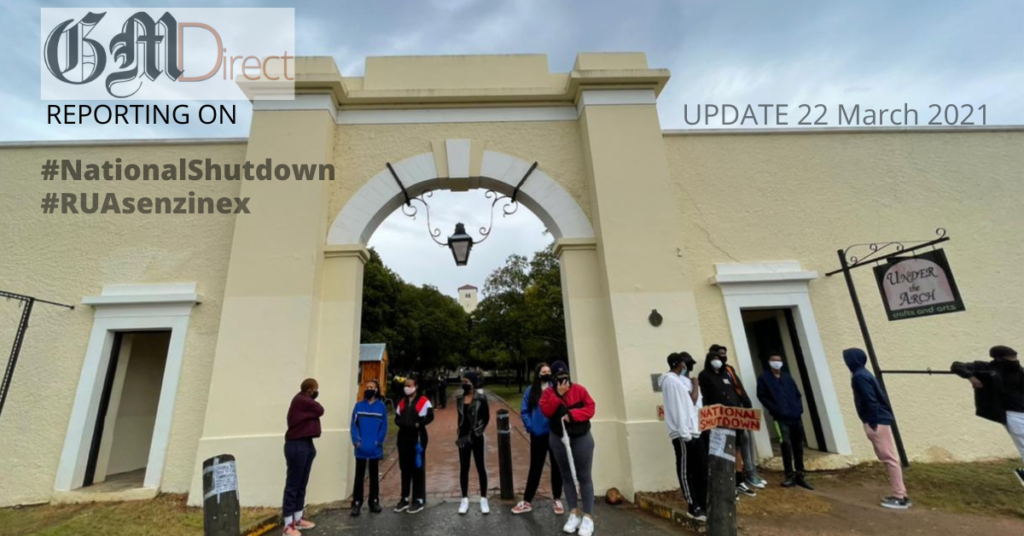 The ball of free education is entirely in the court of national government says Rhodes, as #NationalShutDown protests at the Makhanda campus enter their second week. Tristan Cooke reports

Rhodes makes up around R279 million of South Africa’s R13 billion national student debt bill. As the town’s biggest employer and largest single contributor to its GDP, it’s crucial the institution remains financially sustainable for contribution to the town and its quality and transformative education. In a virtual engagement on Friday 19 March, Vice Chancellor Dr Sizwe Mabizela laid bare the institution’s economic straits and SRC President Lebohang Nkambule drew a stark picture of the dire circumstances of the University’s poorest students.

The protests at Rhodes are part of the shutdown of 26 university campuses across South Africa through the South African Union of Students (SAUS) to support a call for free higher education, and for all students, including those with old debt, to be registered. The call by SAUS on Sunday 14 March for the shutdown of all higher education institutions followed talks with Minister of Higher Education Blade Nzimande. SAUS said Nzimande’s response to their 15 demands about student funding and registration was inadequate.

In his address to the University community on 19 March, Mabizela was called on to clarify Rhodes University’s response to the national crisis, but also to address the specific grievances of its students.

Nkambule raised issues for students unable to register including a lack of funding, historical debt and NSFAS defunding. The national response by the Department of Higher Education Deputy Minister Buti Manamela was referred to by Nkambule as “disassociated and unsatisfactory in not recognising the plight of students”. Their failure to address the issue of free education drove students across the country to declare the #NATIONALSHUTDOWN. The SRC then issued a letter of demands that were rejected by Rhodes management.

On 15 March, the university released a communique stating “no student will be left behind does not mean that every student will have the same starting point”. However, students left behind in 2020 were now students who find themselves financially excluded and unable to register, Nkambule said. Following this, the call was made to delay the start of the academic year.

Students had been “victimised and targeted”, Nkambule later said.

She was responding to a list of alleged legal and disciplinary breaches released by the university.

With the country in Covid alert level 1, Nkambule asked that the university operates at 100 percent capacity. She highlighted the issues faced by underprivileged students in 2020, adding that these issues had not miraculously changed.

Nkambule closed her contribution to the 19 March engagement by calling on the university to drop charges and cases and disciplinary hearings “if we are to move forward amicably in finding a solution”.

In his response, Mabizela acknowledged the struggles of poor and working-class families and agreed it was essential to find an amicable solution that would not see that affected individuals move from crisis to crisis.

With the ongoing economic devastation of the Covid pandemic, more families were qualifying for National Student Financial Aid (NSFAS). The organisation depends on funding allocations from the National Treasury.

Student debt in South Africa is at almost R13 billion, Mabizela said. At Rhodes, it is approximately R279 million. Universities are unable to raise these funds and so free education is in the hands of the government.

Rhodes is the biggest employer in Makhanda and contributes more than any other single entity to its GDP.

While the University had funded oppidan allowances from its own resources, NSFAS funding decisions rested with that body and the government, Mabizela emphasised.

“The university had planned to pay allowances to NSFAS qualifying students who are in the residences, this week, but staff were not able to access their offices and do this,” Mabizela said.

These students would receive their allowances on Tuesday 23 March, Mabizela said.

“We will never kick any young person out under these circumstances. They have registered and they are able to engage in the teaching and learning processes of our university…  Among the first-time entering students that had applied for NSFAS No student on campus has been required to leave,” Mabizela said.

NSFAS-funded students who had not met their academic requirements in 2020 had not received funding but may appeal to NSFAS through their online portal.

“The NSFAS mandate is to fund the first degree [of a student],” said Mabizela.

Because postgraduate degrees had been funded in recent years, a misleading perception had been created this was in the NSFAS mandate. According to NSFAS policy, no LLB, PGSE or other post-graduate degree would be funded by NSFAS in 2021.

As resources are not adequate to deal with a full-scale Covid outbreak in Makhanda, Rhodes could not allow a full return of its students (around 8000). Instead, through a ‘phased-in approach’ it had prioritised the return of international students due to issues with allocating data outside South Africa.

“We are doing this in a phased manner so that we do not create a health crisis in Makhanda.

With registration closing on 26 March, there was a moratorium on assignments due before that date.

According to the SRC, protest action at the Rhodes campus is set to continue on Tuesday 23 March if issues are not resolved.

Two student grievances specific to Rhodes University were the non-payment of NSFAS allowances to students living in residence, and the non-provision of data to international students who are unable to return to South Africa.

Nkambule said, on the decision not to pay allowances to residence students: “It is truly unjust as some students need this allowance for sanitary pads, toiletries and other basic needs,” she told Mabizela.

International students unable to return to South Africa are not being provisioned with data, as issues have risen with data purchases outside of the Republic of South Africa.

Mabizela said the University had paid out of its own pocket to fund oppidan allowances.

Residence students would receive their allowances on Tuesday 23 March. First-time students must provide their banking details in order for them to receive these. With NSFAS committed to delivering payment only in April, it had now fallen on universities to facilitate large payments and raise funds for allowances, Mabizela said.