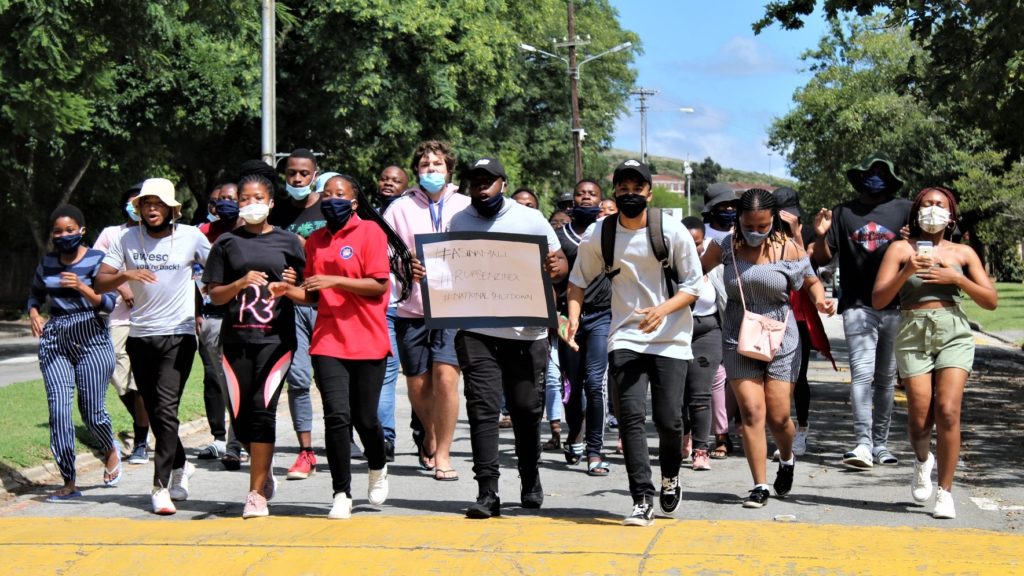 Day 4 of the #NationalShutdown protests at Rhodes University, Thursday 18 March, saw a growing number of student protesters, and an increased police presence. Dana Osborn and Tristan Cooke followed the student action and spoke to student, University and labour leadership about allegations of intimidation.

“I don’t think our students want to see this university collapse. I don’t think the university management wants to see the students suffer. That is the starting point – but it gets contaminated and turns into a fault line of us versus them.”

Director of Communications and Marketing at Rhodes University Luzuko Jacobs was responding to questions about an email circulated to students and staff earlier this week. The strongly worded email claimed there had been “legal and disciplinary breaches” by protesting students. These included intimidation and threats of violence toward staff and students and racial abuse towards a staff member.

Student leaders expressed surprise at the allegations, saying the tone of their protest action had instead been peaceful and non-violent.

On the allegation of racial abuse, she said, “As the SRC we condemn that. No person should be racially discriminated [against].”

Regarding allegations of threats of violence and intimidation, Nkambule said, “In the cases that staff are [insistent]… we let them go through so that we can avoid any forms of violence.”

Since 6am on Monday, the protesters have blocked access to the campus.

“It’s not the SRC,” Nkambule said. “We even sent out a post saying no one should feel like it’s compulsory to join the SRC in this [protest].”

South African Students Congress (Sasco) representative, Nkateko Mbele said, “This is a peaceful protest… they were just trying to make the staff member leave. That usually happens when a staff member tries to force their way in after we’ve asked them to step back.”

Of the alleged intimidation of students*, Mbele said, “That was an individual who acted of their own accord… [they are]being dealt with accordingly because obviously we don’t support that.”

If things are put on Facebook, go talk to Mark Zuckerberg.

Secretary General of the EFF Student Command Thulani Tshabalala questioned, “In a South African context, how do you racially abuse a white person?

“We are not responsible for Facebook. If things are put on Facebook, go talk to Mark Zuckerberg.”

in an interview on 17 March, Jacobs clarified the allegations. He said the “intimidation and threats of violence” mentioned in the email concerned two incidents.

The first was reported by the National Tertiary Education Union, who reported that a staff member had been “accosted, surrounded and ordered to leave the premises”.

The second incident was a Facebook post directed at first years who were not supporting the protest action. It had threatening undertones, Jacobs said.

The alleged racial abuse by a protester, Jacobs said, had been experienced by a staff member “who happens to be a white staff member”.

Because the incident is being reviewed, Jacobs declined to disclose further details.

When NSFAS finally confirmed last week who would be receiving financial aid this year, oppidan students were given their allowances for the month, Residence students were not.

Asked to discuss why NSFAS funded students had the impression they would all receive their allowances (residence and oppidan students), Jacobs said, “It is possible an impression could have been created at that meeting that it was all students… I would own up to any misunderstanding and miscommunication that might have happened… the plan was always to take care of the urgent situation that involved the oppidan students”.

Sasco’s Mbele said, “We were under the impression that every student would receive their allowance. When that didn’t happen, obviously the students were angry.”

Nkambule said communication about allowances was a matter of accountability.

“If [the University is]going back on [its]word, let us know.”

The EFFSC’s Tshabalala said he would like to thank Jacobs for taking responsibility.

With regards to the protest he stated that “we have never ever discriminated against anyone, we have been peaceful. We are not burning anything, we are not destroying anything, we don’t want a confrontation with no one,” Tshabalala said.

National Education, Health and Allied Workers Union branch Chairman Mzamo Mjoli aired frustration over being left out of communication, both by the university and the protesting students.

“We want this to be resolved by the management and students before we come on to campus,” Mjoli said.

Nehawu have pledged their solidarity with the students, but were explicit that they were not directly involved in the protest.

Referring to the alleged intimidation incident, Mjoli said, “If the students say don’t come on campus… and I [insist]then something would happen because you have triggered that action. You have provoked those students.”

* This sentence has been changed. Previously it read as follows:
Of the alleged racism, Mbele said, “That was an individual who acted of their own accord… [they are]being dealt with accordingly because obviously we don’t support that.”
However, Mbele’s comment was not about alleged racism, but alleged intimidation.
GMDirect regrets the error.

** The Vice Chancellor’s address to University stakeholders will be at 3.30pm, not 3pm as originally stated here.