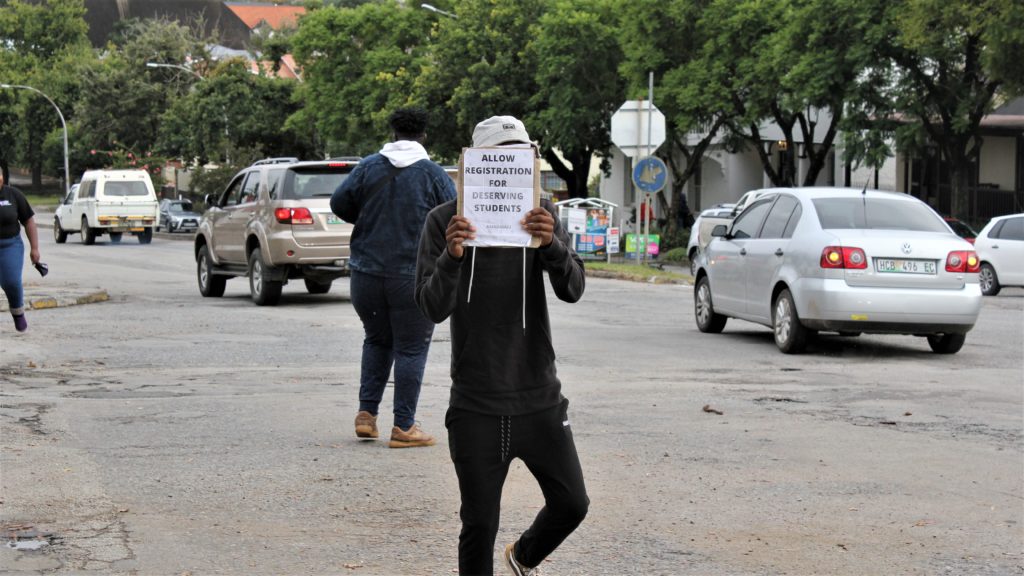 A student protester holds up a placard during the #NationalShutdown protests on Wednesday 17 March 2021. Photo: Dana Osborn

By TRISTAN COOKE and DANA OSBORN

Protests under the banner #nationalshutdown closed down all activity on the Rhodes University campus on Monday. The University administration has informed the SRC that National Student Financial Aid Scheme allowances would be given to all eligible students.

However, while Oppidan students received the allowances, students in university residences did not.

On Tuesday afternoon, the SRC conducted a vote among protesting students, who called for Vice Chancellor Dr Sizwe Mabizela to address the student body directly.

Amu Machabi, a penultimate year LLB student, said the #NationalShutdown protest action would ensure accountability for the Vice Chancellor’s statement last year that no student would be excluded on a financial basis and that no student should be left behind.

SRC President Leboghang Nkambule said, “The primary goal is to get students cleared to register.”

The SRC has demanded that the university put a halt to the academic programme this week. Nkambule praised the community for their acknowledgement of issues being faced, especially a number of Rhodes University staff members who stood in solidarity with the protesters. “They understand what it is like to be continuously left behind by a system that does not serve working-class and poor students.”

The students, led by the SRC, are waiting for a university response to the demands made.

In a meeting at the end of the protest, students emphasised the need for transparency. They said they were growing increasingly unhappy at what they said was ae lack of clear information from the institution.

The SRC has suggested that the VC address the student body online, out of respect for Covid protocols.

The #NationalShutdown campaign resumed at Rhodes University at 6am on Wednesday 17 March.