Local fossils shake up our tree of life 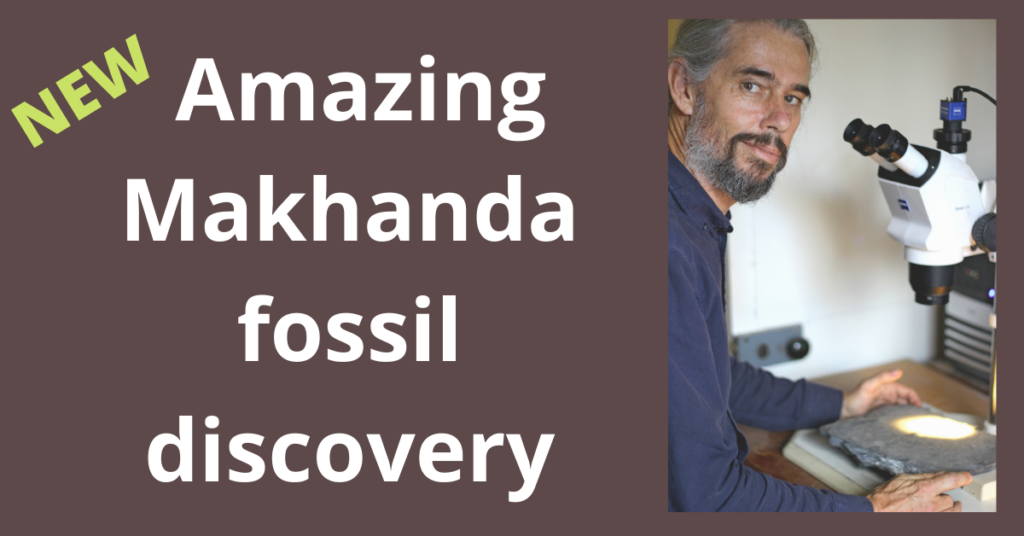 An astonishing discovery of baby lamprey fossils just outside Makhanda will force a major rethink of the evolutionary tree that gave rise to all vertebrates including our own species – Homo sapiens. Well-known local palaeontologist, Dr Rob Gess, found the fossils in 360-million-year-old black shale deposits from the Waterloo Farm bordering the N2 highway.

The lamprey fossils were in various stages of development from hatchling to adult when they died. Remarkably, the smallest preserved individual, barely 15mm in length, still carried a yolk sac, indicating that it had only just hatched before entering the fossil record.

The prestigious scientific journal, Nature, has just published his findings and those of his collaborators in an article titled,  Non-ammocoete larvae of Palaeozoic lampreys by Tetsuto Miyashita, Robert Gess, Kristen Tietjen and Michael I. Coates.

Gess had already described the world’s oldest lamprey fossil species (Priscomyzon riniensis) which he published in an article in 2006 about an exquisitely preserved specimen he had found at the same location.

The most surprising feature of the baby lamprey fossils is that they have almost the same appearance as their adults. This is not the case for lampreys living in our oceans and rivers today.

When modern lamprey eggs hatch, they produce larvae known as ammocoetes that don’t look like, nor behave like the adults. Through the extended larval stage, the worm-like ammocoetes are blind, filter feeders that burrow into riverbeds. After two to seven years, ammocoetes transform into adult lampreys with functional eyes and blood-sucking circular mouths.

Lampreys are fishes that look like eels and feed by latching onto other fish with a round sucker that surrounds their mouth. They grip onto their prey with circles of teeth on the sucker, then rasp a hole with special teeth on their tongue so they can drink their victim’s blood.

Scientists believed that this strange life-story echoed transformations that occurred some 500 million years ago and gave rise to all fish lineages, including the one that ultimately led to ourselves. The last invertebrate ancestor of vertebrates is therefore often described as being ammocoete-like, and the earliest vertebrate (animals with backbones such as goldfish, lizards, crows and people) as being lamprey-like. But for this to be accurate, something corresponding to ammocoetes and lampreys would need to have been present at the dawn of our (vertebrate) history.

The problem with this widely held viewpoint is that ammocoetes only evolved much later. Gess’s discovery provides strong evidence, supported by a few less ancient (Carboniferous) juvenile fossils found in North America, that ammocoetes did not exist when lampreys first evolved. They were an evolutionary innovation and only appeared sometime after the Carboniferous Period some 300-million years ago, probably much more recently.

The fossils found on Waterloo Farm have a drastically different structure to the ammocoete phase found in lampreys today. This shows that the ammocoetes are not ancient holdovers from ancient times. Rather, the modern filter-feeding phase is a more recent innovation that apparently allowed lampreys to populate and thrive in freshwater rivers and lakes.

Distant human ancestry seemingly did not include a lamprey-larva-like stage. Lampreys now appear to be a highly evolved side branch which shared a common ancestor with us – probably a jawless fish enclosed in bony armour.

Research on the Waterloo Farm project currently falls under the ‘Devonian Ecosystems Project’ based at the Albany Museum in Makhanda, a partner of the Department of Science and Innovation (DSI) and National Research Foundation (NRF) Centre of Excellence in Palaeosciences. It is funded by the Millennium Trust, the DSI-NRF Centre of Excellence in Palaeosciences, the NRF and the NSCF (Natural Science Collections Facility). Tools of the trade: Rob Gess uses an old table knife and a chisel to explore the mountain of shale he collected from the N2 near Waterloo Farm. File photo: Steven Lang

A man and his fossils

Dr Rob Gess has devoted a hefty portion of his professional life as a palaeontologist to splitting open tons of black rocks found on the Waterloo Farm on the outskirts of Makhanda, then analysing and describing their contents. Over the years, the sedimentary black shale has rewarded him with rich pickings of fossils of animal and plant life that inhabited an estuary in this area in the late Devonian Period about 360-million years ago.

Those rocks have yielded dozens of species that are new to science, of which 23 have been described and named – and he is still counting.

A previously unknown lamprey species,  Priscomyzon riniensis, is one of the more fascinating discoveries Gess has made. The 4.2 cm long well-preserved fossil he uncovered in rocks salvaged in 1999 and described in 2006, still represents the oldest lamprey species ever found anywhere in the world.

Gess was naturally pleased with the exquisite fossil, but as often happens in science, new answers raise new questions. The ancient lamprey looked very much like its modern counterparts – but what did the juveniles look like? Did the Devonian lampreys have a similar life-cycle to the species alive today?

Contemporary lampreys go through an extended larval stage, when they are known as ammocoetes, before they become adults. Gess wanted to know whether the fossil lampreys transitioned through a similar stage. He needed to find a fossil of a juvenile lamprey to be able to answer this question.

While splitting layers of rocks stored in a shed in Bathurst, Gess found fragments of juvenile lamprey fossils every year or so. They were enough to tantalise him with the prospect of an important discovery, but not enough to provide conclusive evidence.

Then one day in the 2007/2008 season, there was the clincher. He was examining new road-works at Waterloo Farm when he found the smallest lamprey fossil from the site. It was only one and-a-half centimetres long and it was still attached to a bulge of yolk-sac.

Gess said that when he found that specimen he did not have an immediate ‘eureka moment’ as each of the lamprey fossils he had found before “had shown something a little different, but each of them has been exciting”.

He said, “the smallest one was really exciting to find” but “the full eureka moment only came later, to be honest, when we sat down and analysed what I had found”.

Gess knew he had uncovered important pieces of the puzzle, but it was only when he had put those pieces together to understand the life cycle of lampreys that he became really excited. “We realised that … Hang on! . . . there’s no room for ammocoetes in this series ’cause the smallest one seems to have yolk sac attached, so it must have just hatched.

“So that was really the eureka moment – when we realised that there was no room for ammocoetes in its life-cycle”.

People of Makhanda should value its unique deposit

Gess firmly believes that more needs to be done to allow the people of Makhanda to appreciate the town’s unique fossil heritage, which he views as a shared treasure.

He said some way should be found of having a more comprehensive display of the material,  “where the people of Makhanda can actually see some of the fossils and can see reconstructions of what they represent, and what picture we put together and some explanation of how we reconstruct them and what they tell us – it would help to make it a lot more real for everyone”.

Gess said that a heritage site about Devonian fossils, accessible to all, would be free of the unfortunate baggage that weigh down other heritage monuments bound up in colonialism and wars. “What is really great about this site, is that it being so ancient, it is actually everyone’s heritage . . . something that all people can be equally proud of”.

He is also enthusiastic about the tourism potential of such a site, “It could help to rebuild Makhanda’s tourist portfolio around something which is unifying, and which is of international significance”.

He has already arranged for SANRAL (South African National Roads Agency Limited) to sponsor a stop-over on the N2 highway where people can learn about these unique deposits, but would also like to see an easily accessible exhibition of some of the actual fossils, in town, where learners and tourists can learn about them – even on weekends. Perhaps it could be coupled with a coffee shop where people could also get educational materials and locally made Devonian souvenirs.

Head of the Albany Museum, Manzi Vabaza, said his institution is immensely proud of Gess’s latest discovery that is important enough to be published in one of the world’s most prestigious journals.

“Rob’s lifetime efforts in conserving the Waterloo Farm site, collecting, curating and researching the fossils that have been excavated over many years, is an accomplishment for which our community can be really proud. One of our treasures is the Waterloo Farm fossil collection, curated at the historic Old Priest House in Beaufort Street. This collection is of great international significance and attracts researchers from all over the world.

“The fact that Rob Gess’ research is on a local fossil site in Makhanda is a massive bonus for our little town, and for our Museum. The Waterloo Farm collection only exists because of Rob’s tireless efforts, at times undertaken at his own expense. His foresight, vision and effort have brought immense credit to South African palaeontology and highlighted our country’s rich fossil record”.

The Waterloo Farm is one of the most important sites of the late Devonian age (approximately 360 million years old). It has exceptional fossil preservation dating from just before the second of five major extinction events that have reset the diversity of life on the planet.

It preserves a wide range of fish, plant and invertebrate fossils which are preserved as flattened silvery white impressions in black shale. About 360 million years ago black gooey mud accumulated in the bottom of a coastal estuarine lake where a swollen river mouth was partially cut off from the sea by a sand bar.

Rising sea levels buried the mud under layers of beach sand. Over hundreds of millions of years the layers of sand and mud were hardened into rock which was buckled and buried as continents broke apart and mountain ranges were folded up.

The original fine, black mud was often very low in oxygen, so plants and animals rapidly buried in it sometimes left behind impressions of their soft parts such as cartilage, skin, muscles and fins. This is extremely rare in the fossil record which normally only preserves bones, teeth and other hard bits.

Exceptionally, what is recorded are the remains of an entire estuarine ecosystem, from delicate waterweeds and seaweeds to small clams, baby fish and the bones of larger fish. Land plants which grew nearby are also preserved, from the remains of small undergrowth species to fronds from the earliest types of trees.

Apart from the lampreys, fossils from Waterloo Farm include Africa’s earliest four-legged animals, aquatic stem tetrapods; Africa’s oldest coelacanth from the world’s earliest known coelacanth nursery; a scorpion which is the oldest known land-living animal from the whole of Gondwana; and remains of sub-Saharan Africa’s earliest woody trees. Other fossils include several species of armour plated (placoderm) fish, the most primitive group of jawed fish which had their entire head and trunk encased in armour plates and went extinct at the end of the Devonian Period; spiny finned fish, an extinct group which had bony spines supporting all their fins except the tail fin; primitive sharks that grew several metres long and probably entered the estuary from the sea to hunt; ray-finned fish of the type that gave rise to modern fish; a range of lobe-finned fish; seaweeds; charophyte waterweeds representing the oldest fully reconstruct able species; and a diverse range of plants.