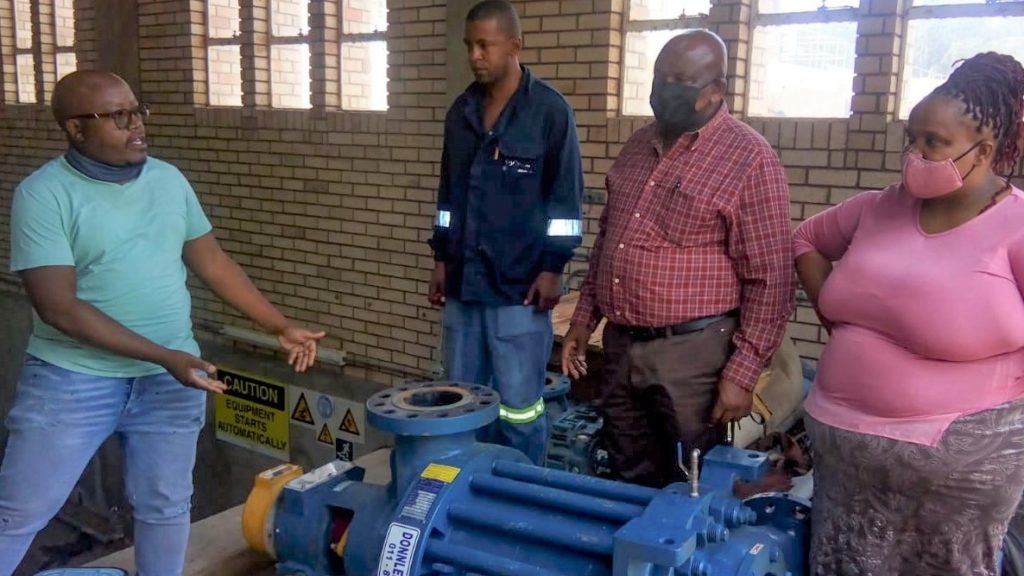 The UPM says it will again seek to have activated last year’s high court order to put Makana Municipality put under administration and have the Council dissolved. This will be the second Section 18 application made by lawyers for the Unemployed People’s Movement. It follows two-and-a-half weeks of water outages in Makhanda caused by breakdowns affecting both water treatment plants. Adding to the headache for the city’s technical teams and residents were vandalism and theft affecting other infrastructure during this time.

In fact, Infrastructure Director, Asanda Gidana, could not have had a more nightmarish start to her new job at Makana Municipality when she arrived at the beginning of this week.

Around midnight on Wednesday 17 February, a gasket blew on one of the massive pumps at the bigger of Makhanda’s  two water treatment works serving most of the town’s residential areas. The fault at James Kleynhans Water Treatment Works that supplies east Makhanda flooded the pump room, bringing water production to a halt and leaving taps dry.

Ironically, on the day Makana launched three important infrastructure projects, the municipality’s communications office was also forced to announce that a failure at James Kleynhans Water Treatment Works the night before meant there would be an interruption to the water supply.

A series of events followed over the next two weeks that led to additional infrastructure crises, with sewage treatment and electricity supply affected as the water outages continued.  Thieves vandalised key monitoring equipment at the main eastern storage reservoir, Bothas Hill; equipment at the Mayfield sewage works; and an electrical substation near the Queen Street taxi rank.

While Makana Municipality on Thursday expressed confidence that the various issues causing outages had been resolved, the UPM is determined to renew its mission to have it put under administration.

In a letter this week to lawyers for the Premier and 16 others, the UPM’s attorney Brin Brody of Wheeldon Rushmere and Cole said the water crisis was “yet another indication of the municipal council’s inability to adequately address the numerous, and substantial problems which currently beset the municipality.

“Other issues, related to electricity supply, sewerage leaks and potholes are ongoing and worsening, with no evidence to suggest that they will be resolved anytime soon. Given the municipality’s continued failure to comply with its constitutional obligations to provide basic services, we hereby afford your client an opportunity to dissolve the council and appoint an administrator within the next 7 days, or we will proceed with further legal action.”

A Section 18 application seeks to have an order of the court immediately implemented, regardless of any appeal process, on the basis it is urgent. This will be the UPM’s third attempt to have Judge Stretch’s January 2020 ruling put into effect.

In January 2020 the Unemployed People’s Movement succeeded in their application to have the Premier dissolve Makana Municipal Council and appoint an administrator in terms of Section 139(5)(b) of the Constitution until local government elections are held and a new council elected.

In May 2020 an appeal by the Province and the Municipality against the ruling was heard and dismissed and they elevated their appeal to the Supreme Court of Appeal (SCA).

On 18 September 2020, the UPM’s lawyers filed a Section 18 application to have Judge Stretch’s 14 January order enforced. That application was dismissed on the basis that the SCA hearing had been granted and was still pending.

In a subsequent letter to the Province’s attorneys, the UPM’s lawyers said the appeal application to the SCA was filed late, Judge Stretch’s January 2020 court order must be immediately applied and an administrator appointed.

Commenting on the latest proposed Section 18 application, UPM leader Ayanda Kota said, “The municipality said they had turned the corner, but nothing has changed, so the argument on the basis of which they were granted their appeal falls away.”

Kota said the UPM was in talks with other organisations about a civil society coalition to contest the local government elections later this year.

“This town cannot survive another five years under this rot,” Kota said. Get the whole picture in GMDirect every Friday – FREE