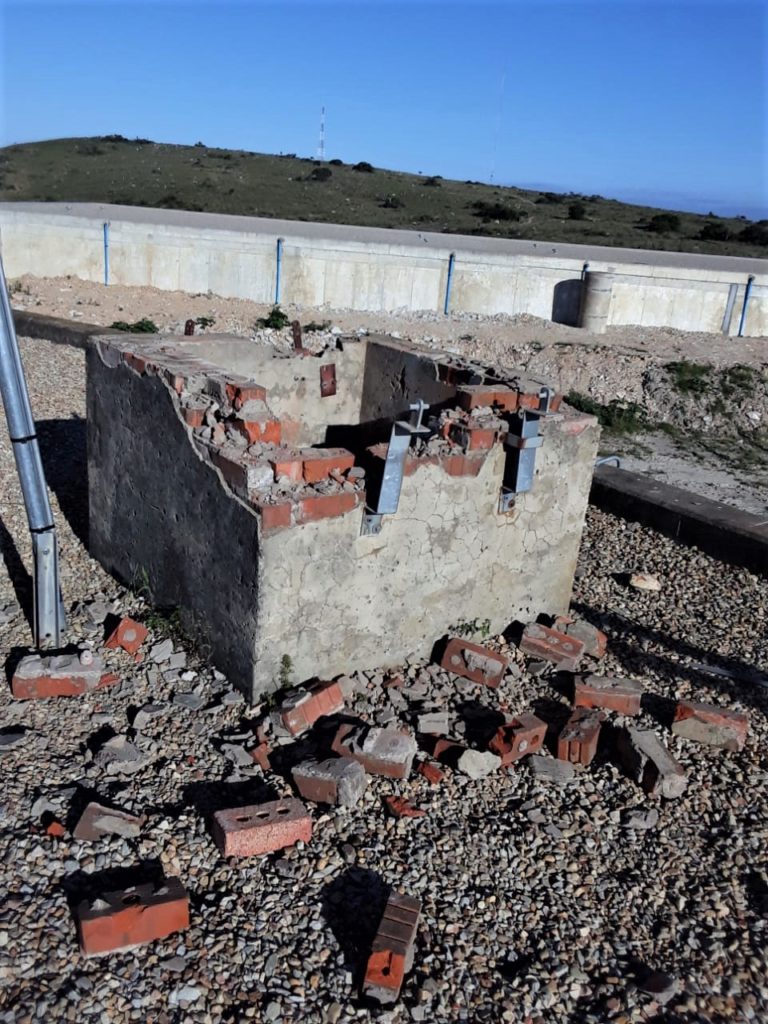 Vandals broke into the Bothas Hill reservoir complex and destroyed the brick housing for a telemetry system crucial to Makhanda's water security. It costs R200K - worth less than R50 in the scrap metal for which it was probably harvested. Photos supplied

A case has been opened at Joza Police Station after vandals have destroyed a R250 000 telemetry system at Makhanda’s main supply reservoir. The discovery was made when water technicians went to reopen the supply to residents after a six-day water outage.

The water outage was caused by a blown gasket on a pump at James Kleynhans Water Treatment Works. The leaking pump flooded the pump station, leaving the town’s residents without water for six days. Technicians were brought from Joburg to commission a backup pump while the broken one went for repairs. The water supply was partly restored on Wednesday 24 February and is set to continue on alternate days until the town’s reservoirs are full.

The telemetry system makes it possible for Makana’s water team to remotely monitor the water flow so that problems can be detected early.

In a statement Wednesday morning, Makana Municipality described the incident as disheartening and said the discovery was made by the water team as they were about to open up the reservoirs after so many days without water for the community.

Makana said a case would be opened with the police.

“We urge the community to safeguard and value their infrastructure,” the municipality said in its statement.

Makana Municipality confirmed that the telemetry system, worth around R250 000, was insured.

There are two reservoirs at Botha’s Hill – the newer one completed in 2014. A year later, on 4 October 2015, the electric fencing around it was completely destroyed and cattle and other livestock freely roamed the main water storage facility for east Makhanda. GMDirect can confirm that the facility remained unguarded and easily accessible for about four more years.

A case of sabotage was opened with the police in June 2019 after the Botha’s Hill reservoir was emptied, subjecting residents to a prolonged water outage. At that time, the Municipality was working with the police to register Botha’s Hill Reservoir, James Kleynhans WTW and Waainek WTW as critical infrastructure.

The Critical Infrastructure Bill, passed in its amended form by Parliament in March 2019, replaces the controversial apartheid-era National Keypoints Act. It allows the Minister of Police to declare certain installations ‘critical infrastructure’ and to determine how these will be protected in the interest of national security.

Around that time, a private engineering company was contracted by Makana to undertake water conservation and demand management (WCDM) in the municipality. In a presentation in the Council Chambers, introduced councillors to the high-tech telemetry monitoring systems they were installing at reservoirs and the water treatment works. Costing roughly R250 000, these were connected to the existing SCADA systems in operation at the water works and pump stations via radio transmitters.

According to inductiveautomation.com, a supervisory control and data acquisition (SCADA) system is made up of computer software and hardware usually used in an industrial setting. It allows those in charge to control processes locally or at remote locations; monitor, gather, and process real-time data; directly interact with devices such as sensors, valves, pumps, motors, and more through human-machine interface (HMI) software; and record events into a log file.

GMDirect has not been able to confirm to what extent this SCADA system would be able to detect a security breach, such as at Bothas Hill in the past week.

Police spokesperson Captain Khaya Tonjeni confirmed that a case of vandalism of infrastructure had  opened at Joza Police Station and a case was currently under investigation. No arrests have been made yet.

Regarding the Critical Infrastructure status of the facility, Tonjeni said detectives could not confirm whether Makana’s waterworks constitute critical infrastructure

“Makana wanted to register their water infrastructure, but I believe it did not fall within the categorisation,” Tonjeni said.

Makana Municipality have indicated they will provide a response by Tuesday 2 March to the questions sent by GMDirect. Below are the questions we’ve asked. We’ll update this article when we receive the responses.