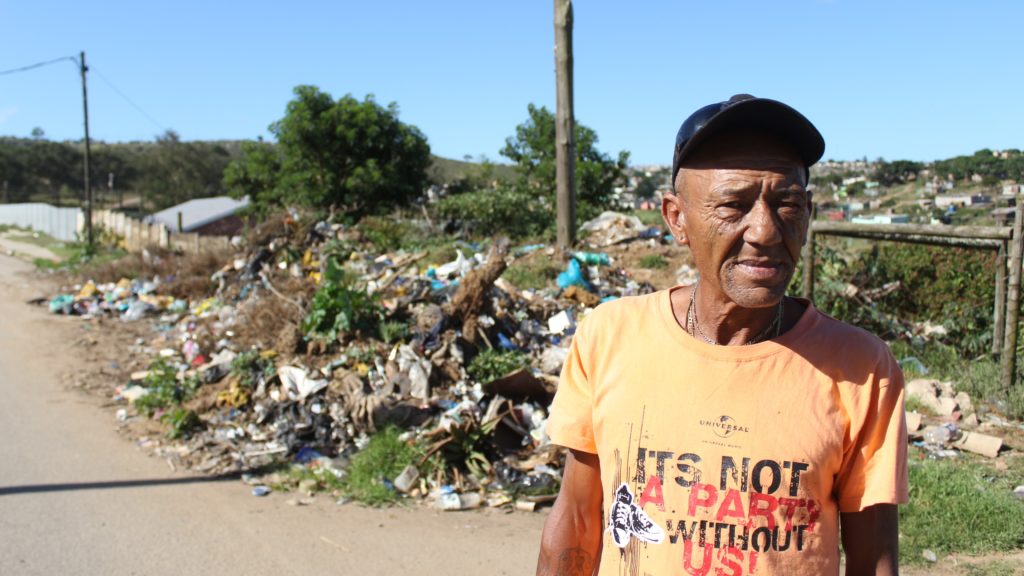 Eston Goba lives opposite a mountain of rubbish that has built up over the past 7 years. The municipality says they will start clearing illegal dumpsites starting next week. Photo: Sue Maclennan

Makana Municipality has promised to remove a mountain and river of rubbish from the north end of Albany Road  at the beginning of the week starting 21 February 2021. It’s among at least 40 dump sites across the town identified in a Council portfolio committee report just over a year ago.

What started as a pile of litter on a small patch of veld next to the Oval rugby stadium has over seven years filled a stormwater drain, forming a river of rubbish. It smells, breeds flies, causes flooding and residents want the municipality to take it away. To make matters worse, residents say, a team sent to clean up dumping along the section of road overlooking the Oval in November left an even bigger pile next to the first one..

Eston Goba lives directly opposite the rubbish pile and says the stormwater drain that runs between the last house in Albany Road and the Oval has been choked with rubbish since 2014.

“They came in November [2020] with a truck and a tractor and 10 workers to clear up the rubbish along the road [i.e. above the Oval].

“All they did was push it into a pile over here,” he said, pointing to the pavement on the south-west corner of the Oval. “They were here for three hours and then they were gone and they didn’t take it away,” Goba said. “Ek dink dis om hul’s klaar gepay.

“Dis wat my so frustreer,” Goba said. “If I had got the job I would have done it properly. Now all they’ve done is make a dam out of the rubbish.”

The “dam wall” of rubbish is so effective that instead of going down into the stormwater drain, rainwater travels along the road gutter and pours down the slope on to houses on the east side of Albany Road, all the way down to Blackbeard and even Aiken Street.

One resident who asked not to be named said he’d lost a garage-full of furniture and equipment thanks to flooding. Others said the Assemblies of God church at the end of Blackbeard Street had often been affected.

Goba said in addition to the flooding, they had to contend with the smell and lots of flies.

“It’s people from the area who are coming and throwing their rubbish here,” Goba said, explaining how the pile had started and grown.

Other residents said the same. Some claimed the municipality doesn’t come and collect rubbish from the area every week.

According to municipal documents, Tuesday is the rubbish collection day for the Hooggenoeg, Albany Road and Seymour Street areas, as well as M Street to A Street and Vukani. Rubbish is scheduled for collection between 7am and 8am in each area.

“Then we will start cleaning up [the following]week,” Makgoka said.

WHAT SHOULD BE DONE ABOUT ILLEGAL DUMPING?

Where is the rubbish on our streets coming from? What will it take to get our town clean – and then keep it that way? What do you think? Write to community@grocotts.co.za or WhatsApp 066 156 2956