A different kind of SONA 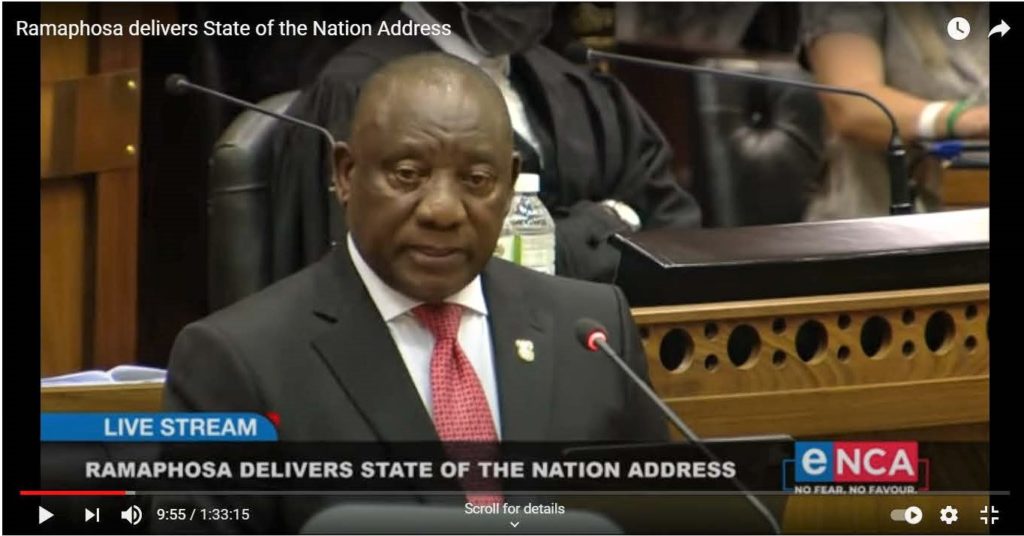 President Cyril Ramaphosa delivers the 2021 State of the Nation address.

The 2021 State of the Nation Address (SONA) was unlike any previous address even as President Cyril Ramaphosa crafted his comments with the purpose of dragging South Africa back to a new, improved normal.

Let’s start with the superficial and obvious differences from other SONAs.

There was far less pomp and ceremony bedazzling the dignitaries as they entered the Houses of Parliament. In fact, there were far fewer people attending the annual ceremony so that every time Ramaphosa paused for an applause, only a few dozen supporters modestly put their hands together in approval.

Compared to the hearty ovations of hundreds of Members of Parliament in previous years, this year’s applause might have sounded a little lukewarm. It was almost as if the audience at a TV show was waiting for a stage hand to raise a sign instructing everyone to ‘Applause’.

If Ramaphosa missed the cheers of party loyalists, he was certainly pleased not to hear Floyd Shivambu raising interminable points of order. Not a single member of the red brigade of the Economic Freedom Fighters (EFF) was present, so the President was able to read his entire speech from start to finish without interruption. This was a welcome departure from the norm of recent years.

Ramaphosa’s address was focussed on the business at hand without excessive digressions or flourishes. It was structured logically with sufficient detail to lend credibility, but not too much so that it became boring. It is easy to believe that even if he did not write the entire speech, he had a meaningful hand in the drafting process.

It is not surprising that the key focus of his address concerned the country’s struggle to cope with the  coronavirus pandemic and mitigate  its consequences. He used the fires that sometimes devastate the fynbos in the Western Cape as an analogy to show that just as the fynbos eventually recovers stronger than before, so the country, ravaged by the coronavirus, will rise up again.

The President outlined the gravity of the pandemic and how it had impacted on South Africa. He paid his respects to the more than 45 000 people known to have lost their lives due the virus, and emphasised that this was a story beyond statistics.

He remarked on the courage and determination of the frontline essential workers who risk infection even as they work to keep the rest of us safe. It is a human story of tragedy and pain, but it is also a story of courage and resilience.

Addressing concerns about the stuttering plan to distribute vaccines, the President assured his compatriots that 80,000 doses of the Johnson and Johnson vaccine would arrive in the country next week. This is only the first consignment of half a million doses from that company.

Choosing his words carefully, he said we have secured 12 million vaccines from the global Covax facility. It is not clear what we have ‘secured’ vaccines means, but we do know that Pfizer has ‘committed’ 20 million doses to arrive at the end of this quarter.

If the coronavirus was the number one priority for this address, the bulk of the speech was dedicated to finding ways and means of dealing with the economic fall-out of the pandemic.

He announced several measures designed to help people survive through these difficult times, and these measures will certainly be welcomed by those in need. However, it is not clear where the government will get the vast amounts of funds to support them.

It is true that there are various funds the government can dip into, and cost-cutting measures in non-essential sectors can make a difference, but it will be interesting to see if the Finance Minister can make ends meet when he delivers his budget speech.

If the numbers don’t crunch as we would like them, and the beans need to be counted in a different way, then it might be tempting to start printing more money.

So, we might have to brace ourselves for a wave of inflation after the waves of Covid-19.