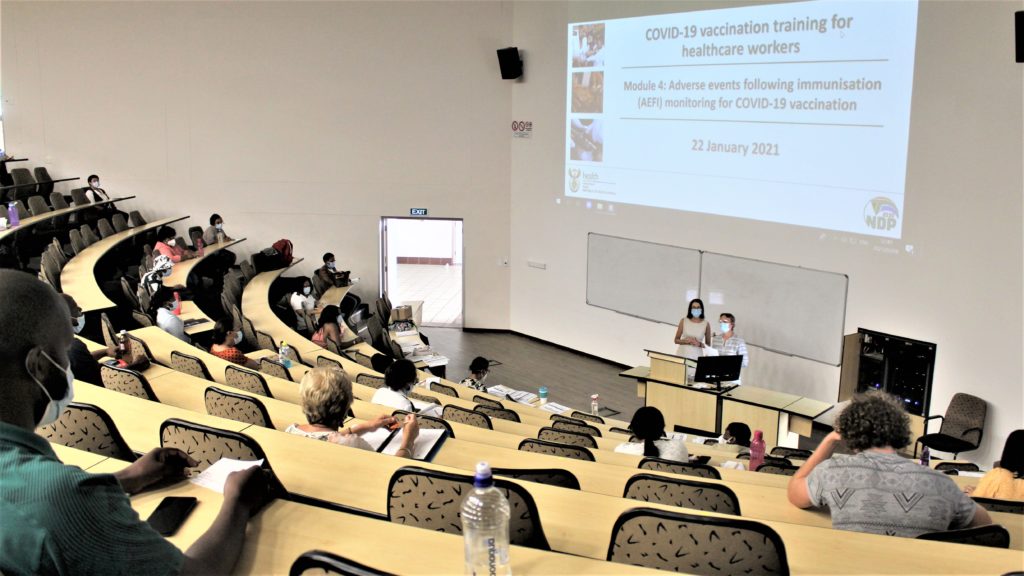 Health workers undergo training to administer the Covid-19 vaccine. The training took place in Makhanda on 4 February 2021 and the first vaccinations are expected to be done at the hospital in the second half of next week. Photo: Sue Maclennan

The Covid-19 vaccination programme will be launched in Makhanda on Wednesday 10 February. Hospital staff are the first in line, with other high-risk health workers to follow.

Meanwhile, dozens of private and public health workers from the Department of Health’s Makana District (which includes Ndlambe) this week attended training sessions in Makhanda on administering the AstraZeneca Oxford University Covid-19 vaccine.

One million Covid-19 vaccines from the Serum Institute of India arrived in South Africa on Monday, with a further 500 000 due to arrive later this month.

Department of Health sources told GMDirect that vaccination could begin in Makhanda as soon as Wednesday. However, a sample from every batch must first be tested by the National Control Laboratory at the University of the Free State in Bloemfontein. Health Minister Zweli Mkhize on Monday said this testing was expected to be completed only by 12 February and it’s not clear how this will be fast-tracked.

The Sarah Baartman District has been declared a hotspot over several months. The latest available Covid-19 daily surveillance report for the District  indicates a total of 21479  positive cases so far, 613 deaths and 127 active cases on 3 February 2021.

Makana Local Municipality currently has 24 recorded active cases –all in Makhanda – and Ndlambe six. In Makhanda, 3223 people have recovered from Covid and 114 have died. This municipality is still noted as a hotspot in the Sarah Baartman report.

For Phases 2 and 3, there would be satellite vaccination centres. The sites usually used by the Electoral Commission (IEC) would be assessed for suitability.

A trial run of the electronic vaccination data system was conducted this week, the JOC was told.

Health professionals told GMDirect that the biggest challenge they anticipated was overcoming the many myths circulating about the vaccine. Trained health promoters are being deployed to educate members of the public about it.

“Logistics companies that have mobile refrigeration are being used to transport the vaccines and temperature monitors will tell us whether they remained in the correct conditions. Security for transportation and storage is in place. There are backup generators at the storage sites in case of power outages.”

The Department was busy finalising the vaccination schedule for the first phase, Manana said – “who will come when”.

Each trained vaccinator would innoculate up 50 people per day.

Who gets vaccinated first is being determined by how much they’re exposed to Covid-19. Health workers regularly in contact with confirmed Covid-19 patients would be first in line.

Community health workers would be included in the first phase, Manana confirmed. When it came to availability, the 200 000 vaccines set aside for Eastern Cape health workers were for those in both the private and public health services; however, health workers on private medical aid would receive it from their own doctors.

Exact figures for Makhanda in the first phase had not yet been finalised by the time of publishing.

In the second and third phases, Manana said, shopping malls, places of work, community halls and similar venues would be used to administer the vaccine.

Previous ArticleTemporary relief for child support grants
Next Article How much rain was that?