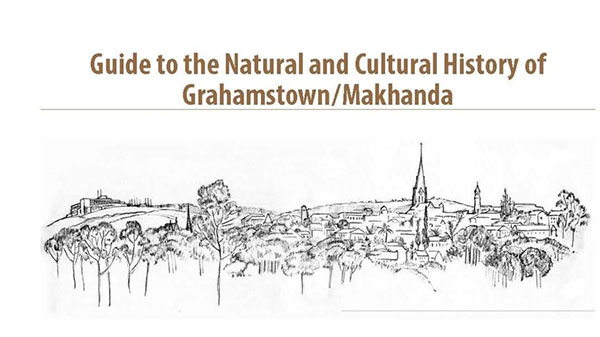 The danger of having your first impressions of the world formed in Makhanda is that it might come as a shock when you move towns and discover that few others have the depth and breadth of expertise in so many areas, or the willingness to share it.

For a start scientists – lots of scientists – the best scientists. Then there’s the most profound artists and poets, diligent historians, and editors… lots of editors.

Put that all together and you have what it takes to make a book that you’ll want to give all your friends and family for their birthdays, because it will make them all want to come and visit you here.

The book lays a solid foundation, literally, with a chapter by Rob Gess on what lies beneath the town: its palaeontology.

Best of all, there are five chapters that are do-it-yourself guides to the town.

Billy de Klerk’s Geological Trail – a walking trail of the CBD – explains the area’s geology using rock materials used in the construction of the town’s buildings and monuments. It’s information that will spark your imagination.

In Roy Lubke’s Tree Trails, you can find out exactly why there are so many trees in Makhanda and set out on two fascinating tree trails that will leave you feeling truly rooted.

The sections on hiking trails by De Moor and Lubke covers those not included in the section on conservation reserves. Most locals know where to go, but this is great for someone new  to town who hasn’t made connections yet and wants to get out. That’s another special thing about Makhanda – the commonage hikes are accessible and free, and there are a lot of them.

The final section, by Lynn Phillips, is on day drives you can do starting off from here.

Most of the writers of chapters in this book are not just highly qualified experts (botanists, archaeologists, palaeontologists, historians, zoologists, entomologists, ornithologists, geologists and more), they are highly respected academics in their fields.

It wouldn’t be a Grahamstown-Makhanda book without poetry, and work by Chris Mann, Sandile Ngidi, Sandile Saki and Dan Wylie takes you to the heart and soul of the town.

Detailed line drawings and illustrations are by Lorraine Mullins and Dorothy ‘Dimmie’ Randell.

You have to know where to find some of our town’s creative people, researchers and  other innovators: most aren’t  great at marketing themselves. There are lots of “didn’t you know?” moments – when you suddenly discover the slightly dodgily dressed person you occasionally see at the supermarket is in fact a world-famous scientist, poet or celebrated artist. Chances are they’re one of the contributors to this local treasure trove of information and insight.

In their epilogue, the editors are frank about the town’s current social, political and environmental realities, and say, “While a vigorous effort to turn the city around is under way, it would be wrong for this overview of the city to downplay what has happened or disguise the mood of residents.”

The editors don’t claim that this is the final authority on our town.

“In our depiction of the physical, biological, conservation, cultural and recreational environments, we have attempted to provide an introduction to very complex topics,” they write. “Moreover, we have elaborated on the many exceptional aspects of the city and expounded on the advantages of life in this part of the Eastern Cape.

“To sceptics this may be viewed as an exaggerated viewpoint and some may even suggest a counter perspective. Since the start of the project much has happened in Grahamstown, too much for the contents of a hybrid compendium of perspectives to capture.”

This book – 10 years in the making – is a gift of inspiration to Makhanda – not only because of the valuable insight and information it provides, but because of the spirit of positive endeavour in difficult times that it represents.

Copies of the book will be available at the launch at the Amazwi outdoor amphitheatre during February (date to be confirmed). The launch price is R250. After that, you can get it directly from WESSA Chairperson Roy Lubke at R300 – email him at r.lubke@ru.ac.za