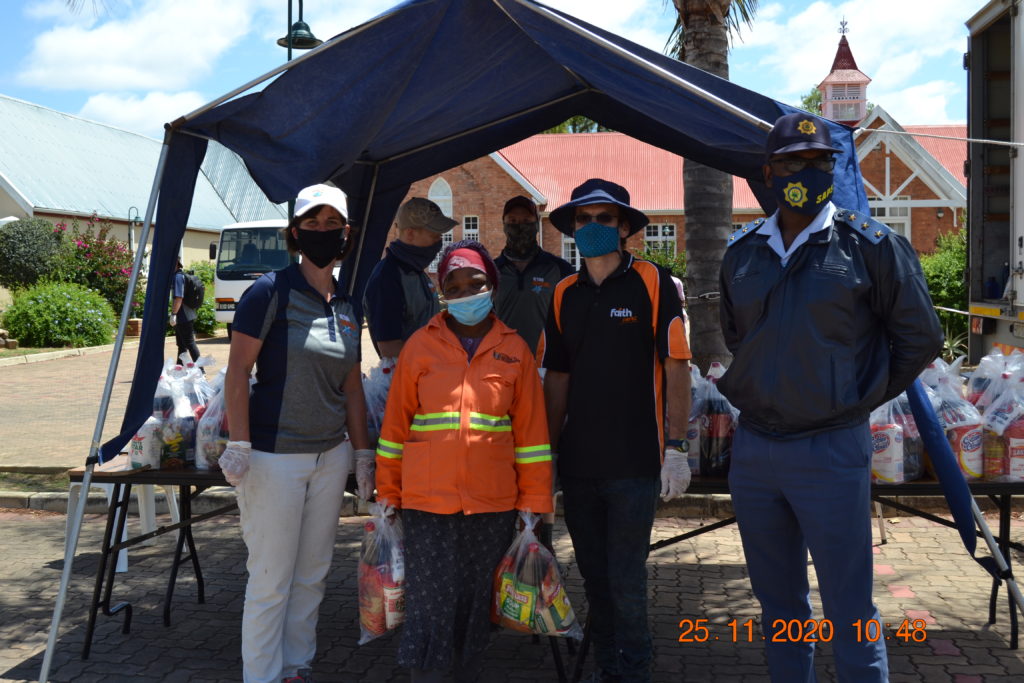 Faith Cares River Ministries Church in East London brought smiles to the faces of Alicedale residents with some early Christmas Cheer by handing out more than 500 food parcels on Thursday26 November.

Learners and their parents from all the communities in Alicedale benefited from this outreach project.

Faith Cares is the humanitarian division of Faith Broadcasting Network. Their main entity is River Ministries. They have a Satellite TV Channel, Faith TV, on DSTV 341, and also broadcast internationally. Faith Cares was formed under Faith TV.

This outreach was done under Faith Cares with the help of Beyond Adventures, also a department of the River Ministries.

The handout and distribution at the Bushman Sands Lodge and Golf Estate on Wednesday was done under strict Covid-19 regulations protocol, with the support of Alicedale Police Acting Commander, Captain Mandliki.

The proceedings started at 10am with the arrivals of the first beneficiaries, and every 30 minutes, 50 people queued to collect. Residents were welcomed gospel music at the Bushmans Sands reception while they collecting their food parcels.

The residents were grateful to Pastor Peter Brits and his wife Pastor Eran Brits from Bushmans Sands Adventures, stalwarts in the Alicedale community. This is not the first time the Brits couple have handed out food parcels – they have done so throughout the lockdown period.

It started in April, when acting principal at George Jacques Primary, Tina Marais and her husband started buying food for community members hard hit by the lockdown. At first, they bought 15 food packs at a time. They later got the help and assistance from Cheeky Watson, Chris Herring and Evan Van Uyssen, who owns a local furniture fabric outlet. Then the Brits couple noticed their efforts and also stepped in.

“I would just like to thank Pastor Peter and Eran on behalf of the Alicedale Community,” Marais said. “They are wonderful and caring people and always willing to assist our communities.”

The couple had even assisted with refuse removal when the municipality had failed to come and collect.

“I really cannot thank them enough for the work they’ve done for us here in Alicedale,” said Marais.

Pastor Carl Davis, the Manager of Faith Cares, said their goal is to make a difference in people’s lives whenever they can.

“We heard of the massive need in Alicedale and decided to do something about it through Beyond Adventure,” Davis said. “The parcels are a gift from us through our valued partners to the people of Alicedale.”

The ministry had handed out around 30 000 food parcels to the poor and the needy since the start of the lockdown, he said.

The organisation had operated for more than 20 years from their premises in East London.

“We get no assistance from the government and do all the work we do because we believe in showing the needy that Christians care: we don’t only pray, but do something.”

The group has also donated 5000-litre water tanks in Alicedale and Port Alfred and runs a Christmas Box Project.

Davis said the Church would soon reach other areas in Ward 14 including Sidbury and the nearby farms.

Resident Alverine Vrolik said, “The packets meant a lot for the people and put smiles on their faces, especially in houses where there’s nothing going on,” she said.

Another resident, Jurika Saterdag, took the time to thank Pastor Peter and his wife with their team for the wonderful gesture. “Thank you for always looking out for us, may the Lord keep blessing you a nd your team. You are truly amazing people which God send out to assist people like us here in Alicedale,” Saterdag said.

The organisers have promised to return to the streets of Alicedale.