No injuries in midnight fire at ‘The Vic’ 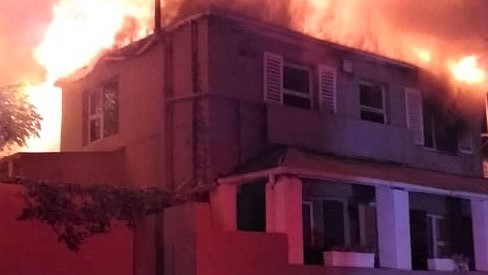 Six rooms were dqamaged and no one was injured in a fire at the Victoria Hotel in Makhanda in the early hours of Friday 27 November. Photo supplied

There were no injuries in a midnight fire at Victoria Hotel in New Street that was quickly contained by fire fighters.

Makana Fire Services Manager William Welkom said a call was received at 12.10pm that there was a fire at the Victoria Hotel in New Street.

“On arrival the crew found the building well alight,” Welkom said. “The fire was quickly confined to avoid fire spread to adjacent buildings. The fire was brought under control and damping down procedures commenced.”

A total of eight Fire Fighters and five vehicles attended the incident,. One vehicle and two fire fighters from the Army, as well as the Rhodes University waster truck, along with two Rhodes staff members, assisted.

Six rooms were affected and damage by the fire included the collapse of the roof.

No one was injured and the cause of fire has not yet been determined, Welkom said.
“The crews did a great job to avoid fire spread to adjacent buildings.”