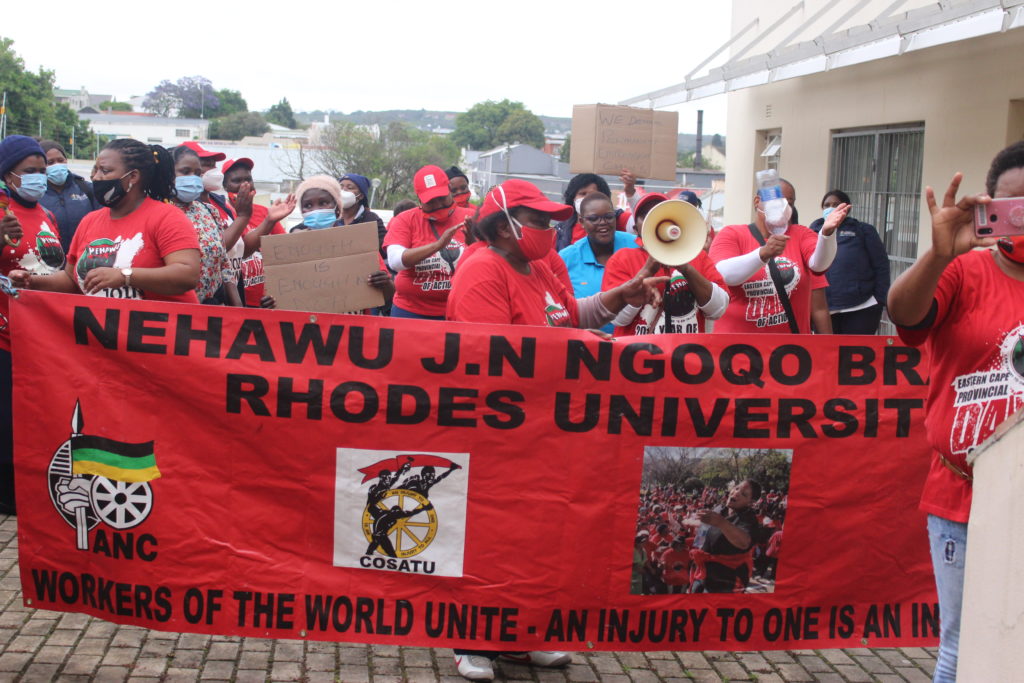 By WENDY NZAMA
On Monday 23 November 2020, Community Health Workers (CHWs) in Makhanda marched to the Department of Health offices in Makhanda demanding to be employed permanently by the department. These workers handed over a memorandum with their demands to the Acting Makana Sub-district manager Mohamed Docrat. These included permanent employment. Community Health Workers earn a stiped of R3 500 per month with no benefits.

It’s not the first time CHWs have taken to the streets this year. In July 2020, alongside other Civic Organisations they staged a protest outside the offices of the Eastern Cape Health Department in Bisho.

Speaking to Grocott’s Mail, treasurer of the National Education, Health and Allied Workers Union (Nehawu) in Makhanda, Monwabisi Jones, said, “We want absorption of permanent employment for all CHWs in the Eastern Cape. If the government does not respond to our demands, we are planning to put all members of Nehawu on strike and shut down the Department of Health.

“We will be here again on Friday and we want a response from Mr Docrat.”

Docrat received the memorandum from the CHWs and undertook to send it to the Department’s national office.

“As we are in the district level, we cannot take such a decision, but what I can do is to submit your demands to the national level,” Docrat said.

In July, Grocott’s Mail spoke to Eusebia Marthinus, who is a care worker at Settlers Hospital.

“We are working under the Covid-19 pandemic and some of us are dying with nothing, but we are still committed,” Marthinus said.

Marthinus at the hospital for 13 years on a contract.

“Every year they promised us that we are going to get employment but that never happens. For 13 years I have been working on the same stipend of R3500 per month which is not enough for me and to feed my family.”

In 2012, CHWs started working under the Department of Health with the salaries gradually increasing. However, CHWs sign annual contract with no benefits.

Their particular value is that they are based in the communities in which they serve and they act as a first point of contact with the Primary Health Care (PHC) system.

During the Covid-19 pandemic, CHWs across South Africa have played a crucial role in the frontline, conducting mass screenings. In the Eastern Cape, the CHWs do Covid-19 screening,house visits for TB / HIV / MDR, and other illnesses requiring treatment support.

In the Eastern Cape, there are approximately 4 129 Community Health Workers.

Attempts to obtain comment from the Eastern Cape Department of Health were unsuccessful.