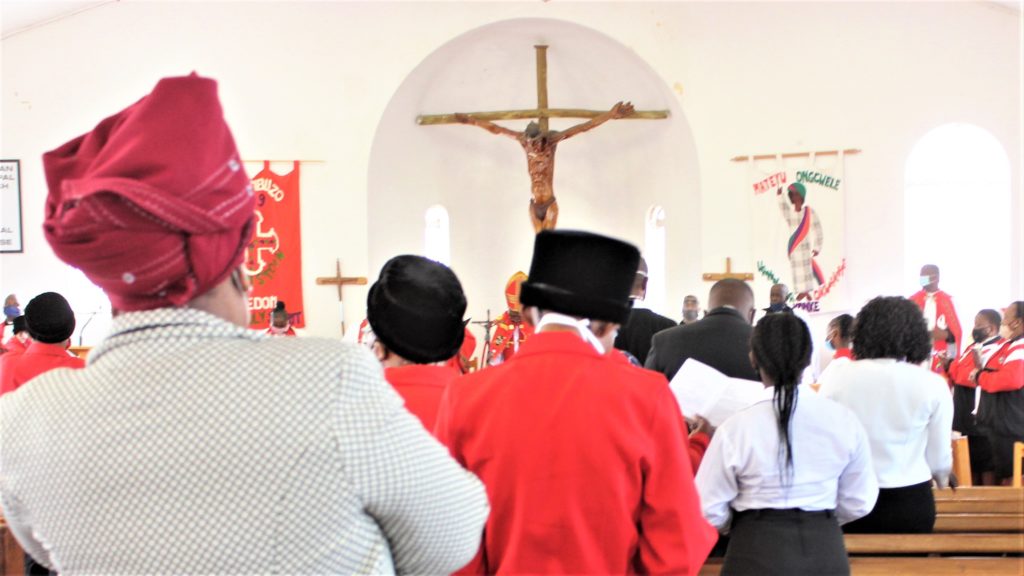 Leadership of the James Mata Dwane Dicocese of the Ethiopian Episcopal Church during a service at the Joza church. Archbishop Nkosinathi Ngesi has urged church leadership to take a stand against corruption in the province. Photo: Sue Maclennan

The Ethiopian Episcopal Church has demanded action against corruption in government. In a scathing condemnation of malfeasance in municipalities across the Province, including Makana, the church’s leader Archbishop Nkosinathi  Ngesi has called on church leadership to take a stand, and for local government leadership to act.

Ngesi’s recent address in the Raglan Road church followed the opening service of the diocese’s leadership conference. In attendance were delegates from 19 towns in the James Mata Dwane Diocese, which extends across the western part of the Eastern Cape. Facing them was Makana Mayor, Mzukisi Mpahlwa.

“Wrongdoers must be exposed and charged – both politicians and officials,” Ngesi said.

Ngesi forms part of a group called The Makhanda Legends, a grouping of local anti-apartheid Struggle veterans. The group recently staged a silent protest outside the city hall as part of the South African Council of Churches anti-corruption campaign. In addition, they have challenged the resignation of former corporate services director Nomthandazo Mazwayi under questionable circumstances.

Ngesi said in an interview after the church leadership conference, “We ask ourselves as the Church, where were the Municipal Manager and Chief Financial Officer in all of this. We also want the Mayor and Speaker to account, failing which they must resign.”

During a period of great political and administrative instability in Makana, the ANC redeployed Executive Mayor Mzukisi Mpahlwa to Makana in December 2019 from his role as special adviser to Nelson Mandela Municipality Chief Whip, the late Bicks Ndoni. Municipal Manager Moppo Mene started at Makana in August 2018. The current CFO started at Makana at the beginning of 2019.

Dali Mlenzana was appointed Technical Services and Infrastructure Director in January 2016 and was placed on precautionary suspension in July 2018. During this period the Council appointed him acting municipal manager (in other words, chief accounting officer with sign-off powers) at least twice. This period is under investigation by the Hawks. Mazwayi was appointed in August 2017.

Asked to comment on his presence at the conference and the public challenge to his office, Mpahlwa said, “I accepted the invitation as a public representative. I will account to anything in writing once l get the demand for me to account in writing.”

What the Makhanda Legends are concerned about

Mazwayi’s resignation followed a report to Council recommending she be placed on compulsory leave, pending an investigation into various allegations. These include an alleged irregular salary increase. The increase was signed off by is Makana’s former Technical Services and Infrastructure Director Dali Mlenzana, who was acting municipal manager at the time. Mazwayi is now municipal manager at Sakhisizwe Municipality. Mlenzana is currently Senior Manager: Engineering Services at Raymond Mhlaba Local Municipality.

Investigations into various projects signed off by Mlenzana began in 2018, initiated by Sarah Baartman Municipal Manager Ted Pillay. Pillay had been seconded as acting MM in Makana at a time when pressure from the DA and civil society was mounting for the municipality to be put under administration.

Mlenzana was placed on precautionary suspension and his lawyers negotiated a settlement agreed on by the Makana Council. Makana’s audit report for 2018/2019 noted that police were investigating “various cases of alleged financial misconduct against a former senior manager of the municipality”. Grocott’s Mail has subsequently had it confirmed that the report referred to Mlenzana.

Hawks spokesperson for the Eastern Cape Lwando Zenzile this month confirmed the investigation is still in progress.

‘We cannot just fold our arms’

The Ethiopian Episcopal Church had its origins in 1899 under theologian James Mata Dwane. Today it has 87 branches throughout South Africa, in every province, with a membership of around 2 million. An affiliate of the South African Council of Churches, its head office is in Joza Street, Makhanda, and Archbishop Nkosinathi Ngesi is its leader. Grocott’s Mail asked the Archbishop to explain the Church’s role in this political space.

“It’s our duty to say, ‘People voted for you to serve them and people can reverse that with their vote.’”

Ngesi said the Church supports President Cyril Ramaphosa in his endeavour to clean up government.

“But they are sacrificing juniors. You don’t see the big fish being called into the Zondo Commission.”

He said South Africa would never be stable if this is allowed to continue.

“Civil society must stand up. No matter what the short-term benefits might be, don’t let the government lull your conscience to sleep: fight for a clean administration.”

Churches in South Africa played a crucial role in dismantling apartheid, and Ngesi says they won’t hesitate to use the same strategies to break down corruption in the current government.

“Putting Jesus on the cross was a political act: the Romans used the cross to suppress revolutionaries who were addressing the imbalances in society.

“Jesus Christ was a freedom fighter. Politics and the Church are one and the same

“We are not apologetic. This town is disintegrating before our eyes. We cannot just fold our arms.”