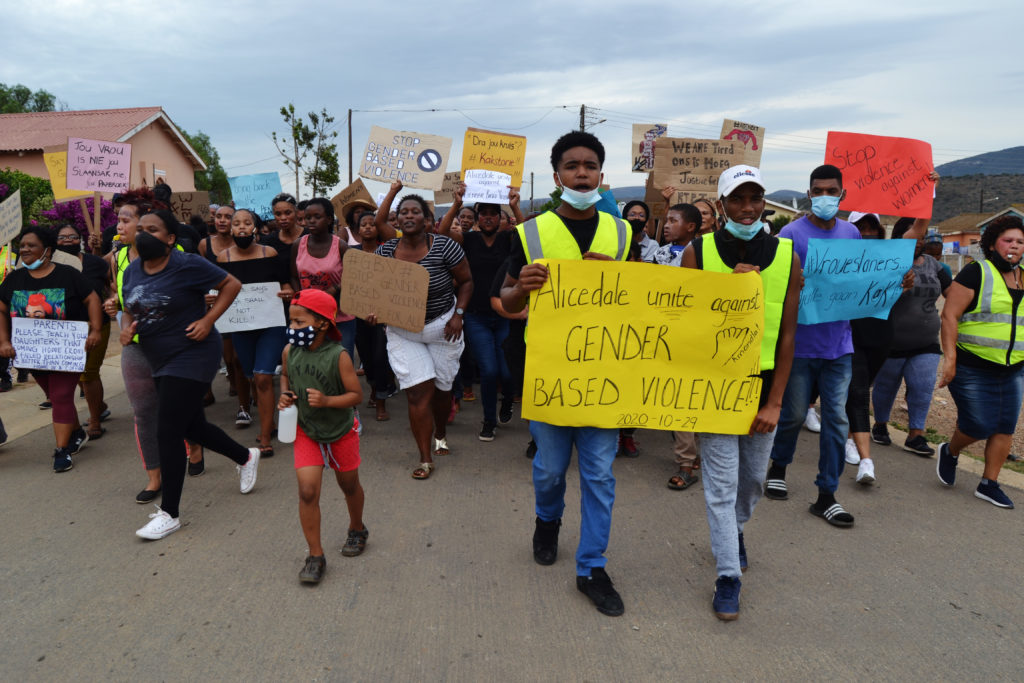 “I last saw my child on Friday and I did not know it was the last time that I would see her.” Alicedale resident Ida Sias is the heartbroken mother of 24-year-old Tamia Bruintjies, who died in Settlers Hospital on Saturday 24 October.

Community members allege Bruintjies was assaulted by someone she knew well and her death brought hundreds of angry and emotional residents and community members from every part of the small town onto the streets last Thursday in a peaceful protest against gender based violence (GBV). Local community leaders said they were sickened by the high rate of GBV in the area over a number of years and that the march was to say enough is enough.

Community members alleged that Tamia was brutally attacked on the night of Friday 23 November.

A community member said he had urged Sias to fetch her daughter, but when she arrived, Tamia had already been admitted to hospital. It was a terrible shock when she later received the news that her daughter had died.

“I last saw my child on Friday and I did not know it was the last time that I would see her.

“I do not know what happened to my daughter, but many people told me [afterwards]that her boyfriend continuously abused her,” Sias said. “My child kept it away from me and now I have to bury her. All that I want to see is that the law must take its course and justice must be served. My heart is very broken because Tamia was a very good child and very respected.”

March leader Wessel Louw said they wanted to create awareness about GBV because violence against women is on the rise.

“There have been disturbing incidents over the last couple of months and years,” Louw said, naming three incidents.

“This list goes on and still our children have to witness their mothers being abused by boyfriends, husbands and fathers. This protest was about empowering our women to break the silence and say ‘NO MORE!’.

“We are tired and want to be loved and not to be tortured and abused,” Pokbas said. “I salute the women who stand up for justice.

“To all the men who still abuse women, it’s the same woman who gave birth to the child who calls you father – a woman whom you can call mother.

“It’s that woman who goes down on her knees and prays that God should protect you. Think before you do abuse.”

The march ended at the Alicedale Police Station where residents handed over a memorandum to Station Commander, Captain Phumzile Madliki. Madiki thanked participants for the way they had conducted themselves during the march.

“We as SAPS are supporting you,” Madiki said. “Down with GBV! We condemn this violence towards women and children.

“People should not [keep quiet]: you must come and report. No one will be turned away,” Madiki said.

The memorandum would be directed to the relevant people and departments.

An inquest been opened at the Alicedale Police Station for investigation.

Louw, who is also a teacher and a preacher, said gender-based violence was becoming the norm in the small town.

“It’s everyone’s duty in collective effort to break this vicious cycle,” Louw said. “We hope to make a difference in encouraging fathers to take their positions as the head of the family to protect their wives and daughters. Our sons should learn to protect their sisters, so that they could learn to do so in future. Our daughters in the community should not be afraid to speak out, knowing that abuse is not love, but devaluation of their humanity.”

Provincial Police spokesperson Captain Khaya Tonjeni, said police had opened an inquest after the sudden death of a 24-year-old woman at Settlers Hospital at 9.50pm on 24 October 2020.

“The report received from nursing staff was that the victim came in with no medical history,” Tonjeni said. “The victim had been brought via ambulance from Alicedale, as she had complained of severe stomach pains. The victim passed away shortly after being admitted to Casualty.”

Tonjeni pleaded with commmunity members to allow due legal process to determine the cause of Tamia’s death.