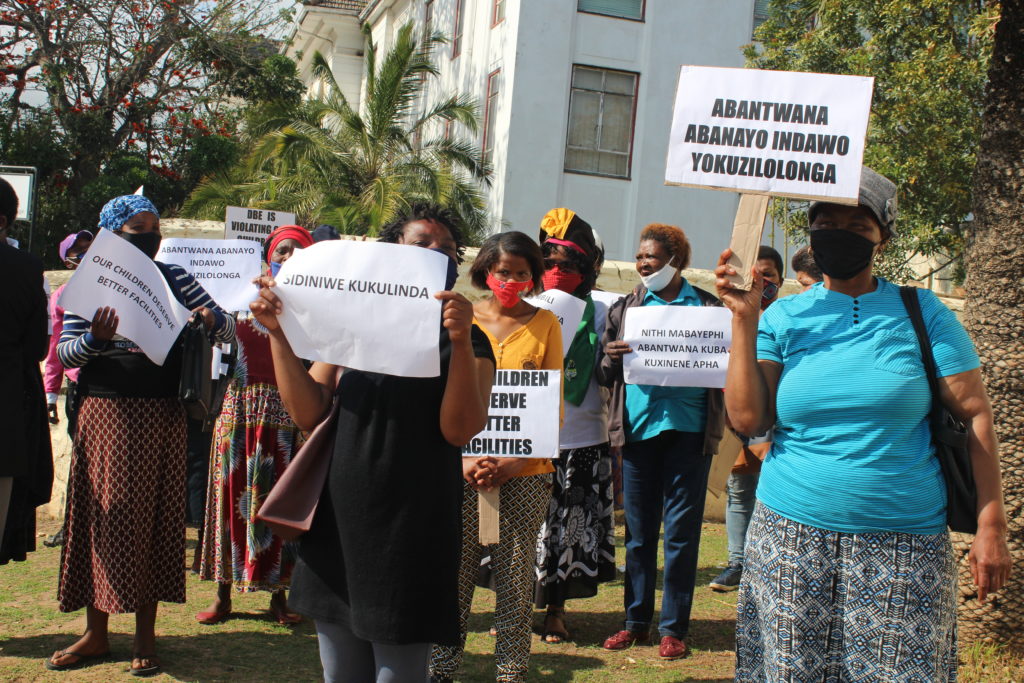 A school catering for the needs of some of Makhanda’s most at-risk children faces losing half a million rands of donated funds and remains cramped up in prefab buildings on an old railway siding thanks to a 13-year bureaucratic delay. Parents feel their children are neglected by the government and have demanded action.

Parents of Amasango Career School on Thursday 8 October marched to the Department of Education to hand over a petition demanding they act on a court order to build proper school facilities. The school’s classrooms are prefabricated structures placed at the end of a siding at the old railway station. On one side is an area where scrap recyclers burn material to retrieve metal. On the other is a neglected graveyard.

Principal Linda Ngamlana outlined the history of the situation.

In 2007, the school’s Learner Representative Council and School Governing Body took the Department of Basic Education to Court. In 2010, the court ordered the Department to build a school in two phases: first the current prefabricated classrooms, then a proper school structure.

When the SGB asked the Department about phase 2, they learnt that land had been identified by Makana Municipality in Joza Extension 10. In 2007, the school received a donation of R500 000 from Dutch donors to make a soccer field at the school’s new permanent site. Over the past 13 years, the money has accumulated interest of R337 000.

Now, understandably, the donors have asked for the money the be returned because the purpose of their donation was never achieved.

The railway siding where the school prefabs stand has no space for recreational activities for the children.

Ngamlana says because of the negligence of the DBE, they are going to lose money which would have benefited the learners greatly.

The school caters for children with psychosocial barriers in learning in mainstream school.

In addition, the parents are concerned that the current location of the school is unsafe for their children.

Businesses surround the school which release smoke and fumes harmful to the health of the learners and teachers. The school grounds are filled with old ashes and coal from the railway station. Across the tracks is a neglected gravesite. Piles of rubbish are strewn across the area. The parents feel the government is neglecting their children.

The school faces an even bigger challenge of space with the outbreak of the Corona pandemic.

Ngamlana says the identified land is big enough for a proper school facility and a hostel nearby. They cannot be admitted in a mainstream school because of the challenges they face in learning.

“If the school had a proper structure, it would be able to extend the number of grades it caters for and also offer further skills training and learning,” Ngamlana said.

The chairperson of the SGB of Amasango Career School, Cecil Nonqane, handed over the petition to the Department of Basic Education’s District Office in the presence of other parents.

A Ms Maselana received the petition and promised to hand it over to Nkosinathi Godlo, Director in the Sarah Baartman District. Maselana said they would reply to the school’s representatives in seven working days, starting on Monday 12 October. The Department agreed to mediate between the school, Human Settlements and the Department of Public Works.