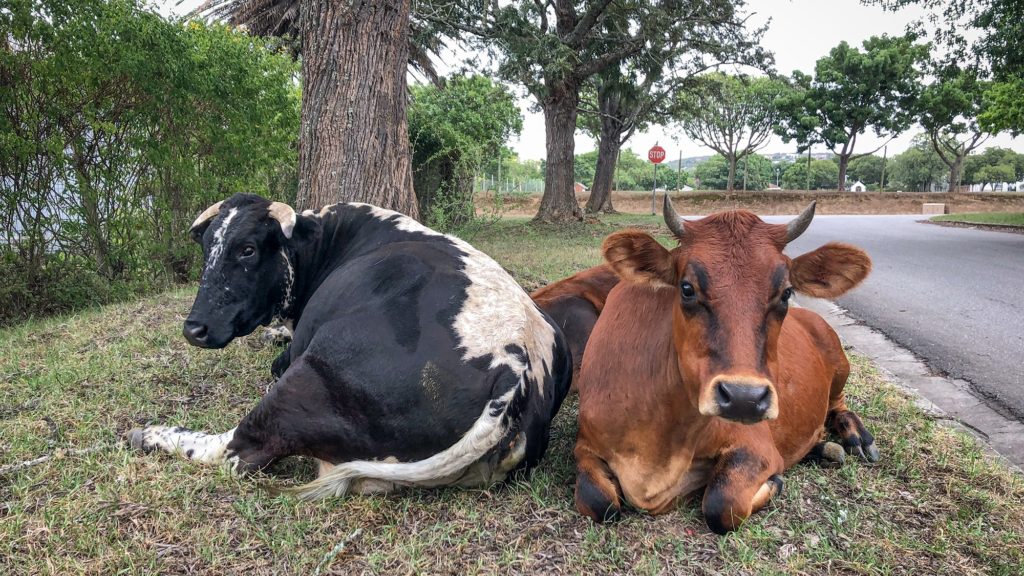 Cattle resting peacefully on the sidewalk in the Oatlands area. A rogue cow in Sunnyside (not either of these pictured) gored a resident, leaving her bruised and fearful. Photo: Harold Gess

A Sunnyside resident was left bruised and afraid after she was gored by a stray cow recently. She is the second person attacked by the rogue bovine and her family has asked the municipality to remove it from the streets before it strikes again.

Through her pastor, Strauss de Jager, Emmie Kuhn, 71, shared with Grocott’s Mail the letter she and her family wrote to the municipal manager earlier this month.

Kuhn, who lives in Sunnyside, was taking her daily walk around 10am on 31 August “to get some fresh air and exercise, minding my own business”.

She was walking past the corner of Market and Bathurst streets when suddenly, and without provocation, a brown cow or bull (unsurprisingly she didn’t stop to check) with white horns charged her and gored her leg.

“I was severely hurt and traumatised,” Kuhn wrote. “Was it not for two Pick n Pay employees passing by who saw what happened and managed to distract the crazed animal, I have no doubt that I would have been severely injured, or even mauled to death.”

Kuhn had to go to the doctor and remained severely bruised in several places.

“In addition, I have blood clots due to the trauma sustained by my body,” she said. “My children are furious and consider taking legal action against the municipality.”

Kuhn discussed the incident with friends and neighbours and friends in the area.

“It became clear that this animal is known to the community and prone to attack without provocation,” she wrote. “One of my 90-year-old friends in Sunnyside was also attacked by the same animal when putting out her refuse on 31 August.

“Fortunately she had her walking stick with her and managed to scare the animal off.”

Kuhn said it was clear that the animal was dangerous and should not be allowed to roam the streets.

“I therefore request you to instruct the Parks Department to catch this animal before more innocent citizens are mauled or killed by it.”

Kuhn’s daughter, who lives in Queenstown, added, “I am very worried about my mom’s health at the moment after the attack, as she is complaining a lot about pain and concerned about the blood clots.

“I will appreciate it if you can really handle this matter as soon as possible, before someone else get hurt or even killed.”

Grocott’s Mail has requested a response from Makana Municipality and will include it in the online version of this article when we receive it.