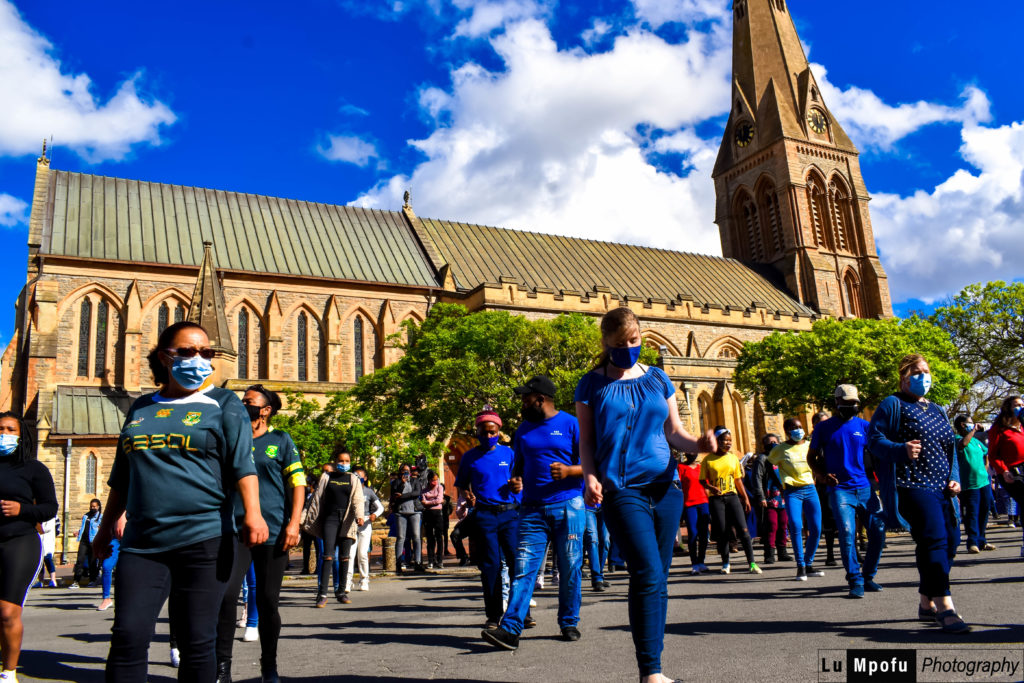 Dancing on the streets of Makhanda to tackle tatty roads would certainly have sounded peculiar to anyone but it attracted hundreds of residents on Sunday afternoon as they gathered at the Church Square to raise funds for deserving community projects.

The Jerusalema Dance Challenge appeal also received several volunteers like photographer Luthando Mpofu and support from organisations such as Makana Tourism to help market the event and Hi-Tec Security, who assisted with a full and visible security team. All who assisted were equally passionate about bringing Makhanda together.

“Our fundraiser was a huge success. We managed to raise just under R4 000,” said Herselman. “This event was extremely uplifting and it was an amazing experience to see how Makhanda people can unite in dance. The vibe was incredible and I’m extremely proud to be part of the Makhanda community,” she added.

Over 500 participants danced in the event with large crowds of people cheering from the sidelines. The event went as far as attracting the broadcast media including the SABC and  5FM. Speaking to the SABC at the event, Makana Revive! representative, Lisa Gaybba said that the state of roads in Makhanda had been in a poor condition for the past few years.

“The Municipality has been struggling to keep on top of their maintenance,” Gaybba said. She said that the focus on service delivery has been hampered due to some administration issues. “Therefore, it has become very pertinent to have social civil society groups get together to try and enhance the situation ourselves.”

Makana Revive! Chairperson Ron Weissenberg said the organisation, that is geared for the upliftment and sustainability of the City, was initiated in 2017. Originally it had been a grouping of local residents committed to raising funds to repair the potholed roads. “A Trust was registered with PBO status and since 2018, hundreds and thousands of Rands have been donated and applied to the maintenance and upkeep of the municipal infrastructure.”

The civil society drive using the Jerusalema dance phenomenon to assist Makana Revive! was welcomed by the Makana Municipality Mayor, Mzukisi Mpahlwa who was also in attendance. Makana Tourism’s Director Sue Waugh said it was fantastic to see everyone out in full force. “It was an amalgamation of races and religions coming together,” she said.

Agreeing with Waugh, Pearson, who is also a Graeme College teacher said: “There was no racial or gender segregation yesterday [Sunday]. It shows how we have the power to unite as one.”

The dance instructor for the day, Van Eck, said the smiles coming from the crowds as he led them in the dance were unforgettable. “I saw smiles all round. It was uplifting, momentous and an incredible occasion.”

For those still wishing to donate towards the fixing of potholes, Herselman said contributions can still be made directly to Makana Revive! by visiting their website: https://makana-revive.org.za/get-involved/