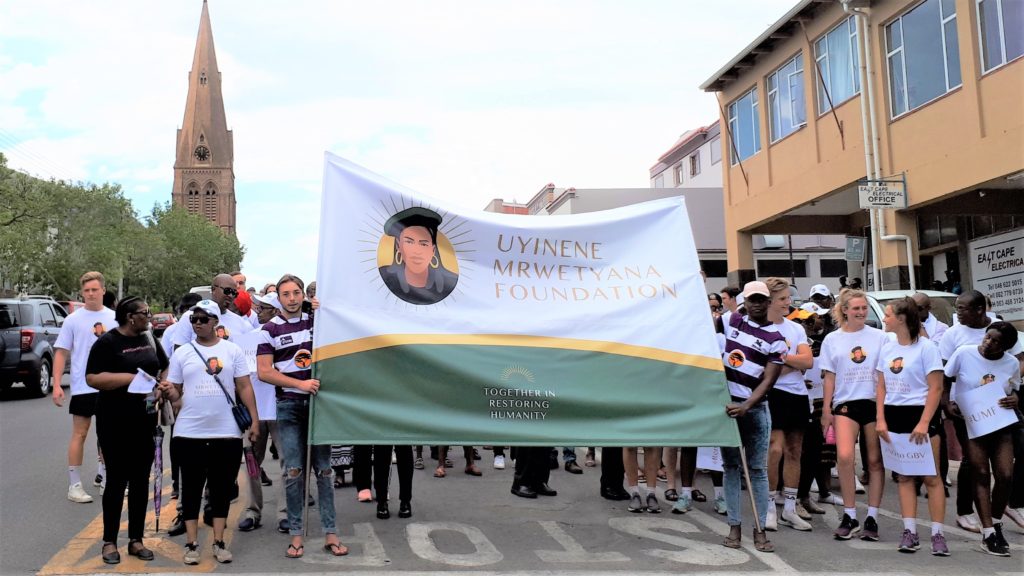 Launch of the Uyinene Mrwetyana Foundation on 29 November 2019. Hill Street. A year after Uyinene's death, the Foundation has asked what has changed. Photo: Sue Maclennan

In dealing with gender-based violence, it’s vital to support women’s independence and education, says former manager of the SADC Gender Programme Nomkhitha Gysman. Grocott’s Mail student reporter Lillian Roberts interviewed her as the Uyinene Mrwetyana Foundation marked the anniversary of Uyinene’s death with the question, “What has changed?”

August 24 marked a year since Uyinene Mrwetyana was murdered at the Clareinch Post Office in Cape Town. Her death sparked nationwide protests.

The Uyinene Foundation said 2018/2019 crime statistics showed a woman was murdered every three hours in South Africa. In many cases rape was unreported, and the number of women who had suffered at the hands of men was far higher than reported statistics.

“Investigation capacity in the SA Police Services remains poor. Directors of Public Prosecutions offices are unacceptably understaffed and under-skilled. Without the certainty of effective investigation, arrest, prosecution and harsh sentences, there can be no remedying these systemic problems,” the Foundation said.

The Emergency Response Action Plan (ERAP) April 2020 report presents the progress made between October 2019 and March 2020.

“In many cases there has been progress made, in other instances, none,” the Foundation said. “While the Foundation recognises that the Covid-19 pandemic and subsequent lockdown may have affected the implementation of the plan, the pandemic has also exacerbated the urgency of intervention. Statistics suggest an increase in domestic and other forms of GBV during this time.”

The Presidency is amending three Bills to combat gender-based violence. The Criminal Law (Sexual Offences and Related Matters) Amendment Act, among other changes, makes public the sex offenders registry. The Criminal and Related Matters Amendment Bill 2020 will restrict the granting of bail to perpetrators of gender-based violence and femicide and increases the offences for which minimum sentences must be imposed. The Domestic Violence Act 116 of 1998 has been broadened to cover engagements and dating, in customary relationships as well as actual or perceived romantic, intimate or sexual relationships.

Gysman had a hand drafting an earlier version of the Sex Offenders Act and she says it requires responsive systems and people.

“All these laws depend on how they are implemented,” she said.

As important was addressing the underlying causes of gender-based violence.

“As long as the government is unable to cater to women, appreciate the work women do and regard it as work in the first place, things will not change,” said Gysman. “Women are characterised as not working – yet they are the first to wake and the last to sleep. They are categorised as unemployed, yet they meet the needs of the entire family.”

Gysman asks, beyond interim shelters, what other structures are there for victims to fall back on.

“Beyond shelters, we need to make a historical connection, as we have had a distinctly violent history.”

“South Africa has many laws within its liberal constitution,” Gysman said. There will be another law tomorrow. The problem is how the laws are implemented and how the budget is allocated.”

“We need to go back to these laws and look at their track record, look at what else we can do,” she said.

“We don’t go to the core of issues. We come from a violent history of colonisation. Apartheid was a ruthless, violent regime. There has been what one could say is the mentality of survival of the fittest.”

In the context of violence generally, gender-based violence was exacerbated.

Gysman said it was important to look at the day of Uyinene’s death as a constant reminder.

“He saw a young woman with softness, sophistication, culture, respect. She saw an old man, and not seeing his cruelty. He victimised a girl who showed him respect and trust. That man was once a boy, then he grew up, and that is a key part of it – how do men come to believe they can get away with it?”

Gysman says it is important to document and learn from women’s stories.

The Uyinene Mrwetyana Foundation’s statement said, “We are calling on all South Africans to arise and speak out against this despicable crime and all forms of injustices against women… We speak out to … hold our government accountable for its plans to end the scourge of gender-based violence and femicide in South Africa.”

The knowledge and confidence needed to exercise their rights

Nomkhitha Gysman has been working for the Southern African Development Community (SADC) Parliamentary Forum as Manager of its Gender Programme, the SADC National Parliaments and National Women’s Parliamentary Caucuses. In May of 2020, she established the Eugenia Nothemba Gxowa Foundation, a non-profit women’s rights organisation. The Foundation is broadly focused on eliminating gender-based violence, but specifically forced/child marriages (ukuthwala). As a Foundation, they are also focused on collaborating with men in leadership roles and building the capacity of women’s community-based organisations that respond to gender-based violence.

Nomkhitha Gysman says that though civil union laws are clear, “girls as young as 15 still get kidnapped and forced to marry old men.”

The Eugenia Nothemba Gxowa Foundation wants to look into how rife child/forced marriages is and why people are able to get away with it, as well as stand-alone legislation and to provide further support to women who are victims of gender-based violence.

The Foundation was created to honour Nomkitha’s late mother, Eugenia Nothema Gxowa (1930 – 2019), a trailblazing teacher who looked after six children and facing the triple oppression of gender, race, and class in the height of Apartheid maintained her independence, and divorced her husband after his infidelity. In a founding document for the Eugenia Nothemba Gxowa Foundation, it states, “At the time there were no laws protecting women’s rights. Without
education, she would not have been able to leave her abusive marriage.

Today there are still women who enter into monogamous marriage contracts and are then prevailed upon to accept their husband’s ongoing infidelity. Promiscuity for married men is still
widely tolerated. The Eugenia Nothemba Foundation intends to make sure that today’s young women and girls are aware of their rights and have the knowledge and confidence needed
to exercise their rights.”

Nomkitha Gysman says working with men is also on the agenda for the Foundation, and spoke about HeforShe campaign, where men in leadership positions in their respective communities can play a meaningful role in challenging harmful norms and behaviours.

HeForShe is a global solidarity movement, started by the United Nations. President of Malawi, Arthur Peter Mutharika has elected to be a champion for the UN HeForShe campaign due to his commitment to gender equality, and specifically to end child marriages.

Nomkitha Gysman also mentioned President Paul Kagame of Rwanda, who has committed to being a champion, and says she would like to see the campaign domesticated here in South Africa; specifying that they are not looking to politicians but to institutions for representatives.

Adam Habib, Vice Chancellor of Wits has elected to be involved in the HeforShe campaign and has begun identifying areas of intervention. She it is important to see sustainability in efforts and to ensure there is a lasting impact. The Eugenia Nothemba Gxowa Foundation wants to look towards working with the University of the Free State and Rhodes University to “identify leaders who will make an impact.” The aim, she says, is “not to impose upon institutions but to research and prioritize issues of concern.” She says involvement with higher education depends on their readiness and willingness.