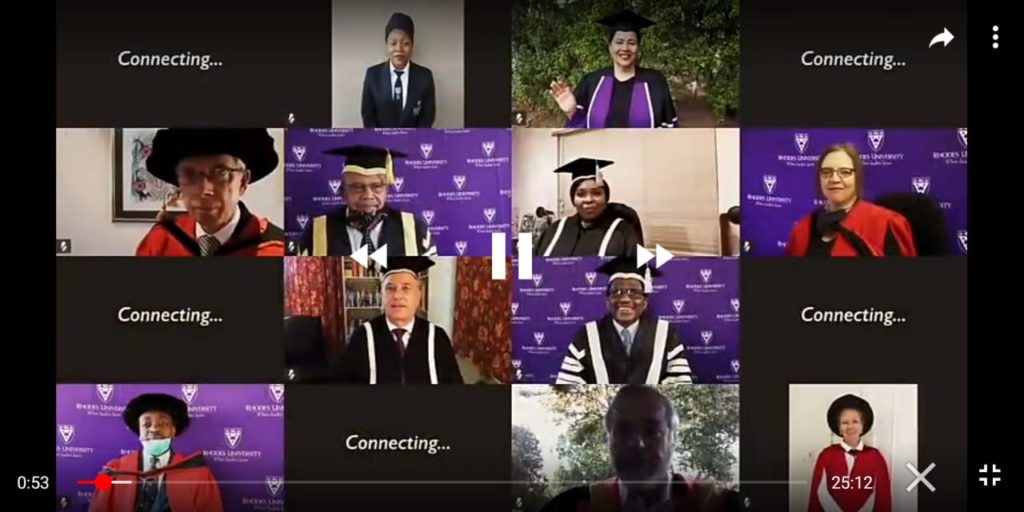 A screenshot from the Rhodes University Virtual Graduation Video

Rhodes University has apologised after its virtual graduation ceremony, a video posted on its YouTube channel, was shared prematurely, sparking a backlash from students and parents. The video was published so it could be accessed by clicking on a link in an emailed invitation to graduates from the Vice-Chancellor. However, before the email was sent, the link to the video was picked up and widely shared.

In a statement, the University said, “The video was uploaded on YouTube in the evening of 7 September for testing and to create a hypertext link for the Vice-Chancellor’s letter to graduates. On the same day, a virtual graduation website, including links to the videos and profiles of the Honorary Doctorates was created.

“Unexpectedly, the video was picked up and shared, ahead of the Vice-Chancellor’s letter that was to be distributed to graduates ahead thereof. The premature circulation of the video also preceded a planned promotional campaign. The result, understandably, was a distortion of the planned process.”

In the virtual graduation video, the University confers degrees and sends congratulatory messages.

From Monday evening, soon after the video was published on the Rhodes University YouTube channel, students took to social media to vent their outrage.

In a letter to students on Tuesday afternoon the Student Representative Council’s Secretary General Shanti Khosa slammed what had appeared to be an extraordinary lack of communication. “The SRC has learnt with a great shock of the virtual graduation ceremony that was supposedly held by Rhodes University,” Khosa wrote. “We are deeply disappointed by the fact that students who worked extremely hard and were waiting for this moment all year long were not even notified of the ceremony via email.”

Parents and students commented on the YouTube channel, as well as the Uckar Facebook group. “How does the University hold a virtual graduation without telling anyone about it……like gmail is free??” read one comment. Another said” Why weren’t emails sent to graduates? Finding out I graduated on someone’s social media is honestly disrespectful.”

In its response and apology, the University explained that the ceremony depicted on its YouTube channel was not a live event, but made up of individually recorded segments that were put together in editing to form a virtual graduation. The segments included videos of graduation ceremonies in previous years.

“This was to reflect the Covid-19 pandemic context,” Rhodes University’s Communications and Advancement Division explained.

“At no point were any of the participants in the same space. The graduation video was a symbolic celebration and an important record for the graduates, their loved ones and the University.”

The University’s apology addresses one of the SRC’s demands. The SRC had also demanded that the University set a specific date for the virtual graduation ceremony, promote it accordingly, and publicise a live stream of the event on all social media platforms.

The planned email to students from Vice-Chancellor Dr Sizwe Mabizela was issued just a day before the University’s apology for the error in timing.

In his letter, Mabizela congratulates the graduands and explains the virtual ceremony as follows:

“In compliance with the University Statute which states that ‘a person is not entitled to any of the privileges conferred by any degree until he or she has been admitted to such degree at a congregation’, the University Chancellor, Judge Lex Mpati, in this video, constitutes a virtual congregation of Rhodes University for the conferral of degrees and award of diplomas and certificates in absentia.

He assured students that once the Covid-19 pandemic had receded, students would be invited to come to the University with their families and loved ones to celebrate their achievements publicly.

The University’s Communications division said in its statement, “We accept the criticisms as a result. All that was done was in good faith, a labour of love for our graduating students. For our serious missteps relating to what we should have foreseen, we sincerely apologise.”