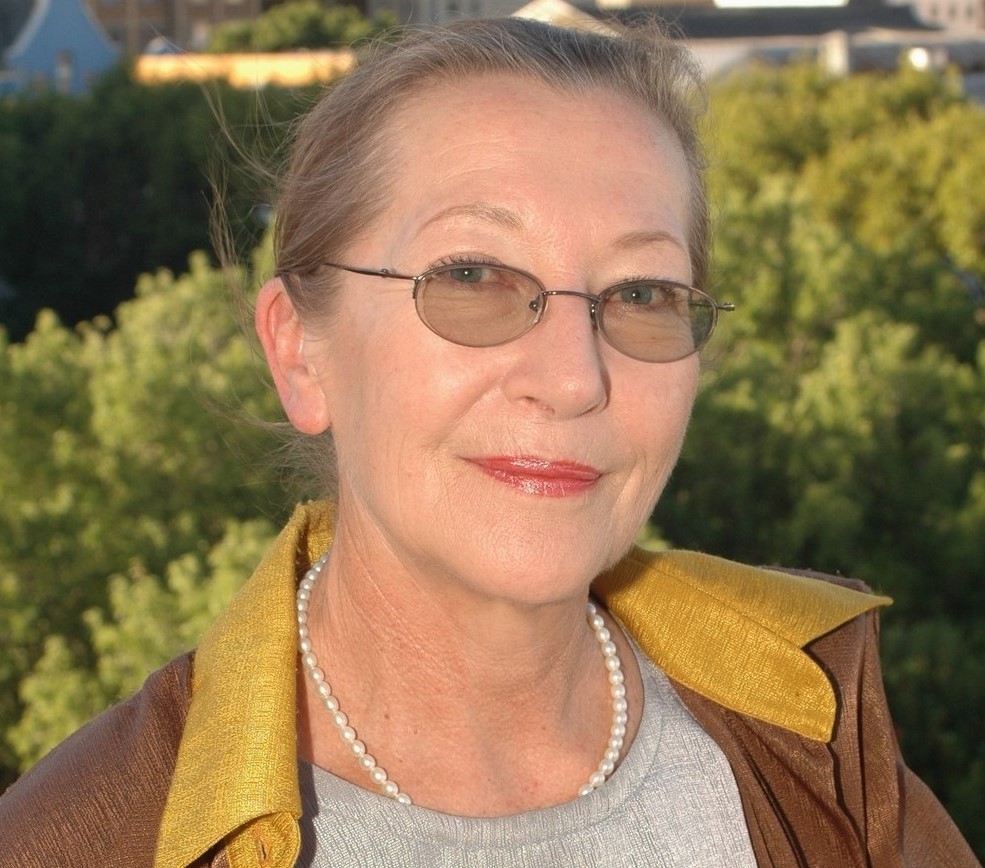 Lynette Marais passed away on Friday 28 August 2020. These tributes are from the National Arts Festival and the Cathedral.

It is with deep sadness that the National Arts Festival shares the news that Lynette Marais, former Executive Director of the Festival, passed away in Makhanda on Friday, 28 August 2020 after a short illness. Lynette was the head of the Festival from 1988 to 2008 and spent much of her tenure turning the Festival into the highlight of the year for art lovers and an essential part of the arts ecosystem in South Africa.

In her 2009 graduation speech on receiving an honorary Doctor of Laws (LLD) from Rhodes University, Lynette spoke fondly of her time as Executive Director of the Festival. “I arrived in Grahamstown at a turbulent time in our country’s history. I had hardly touched base when I was asked to attend a meeting of the National Cultural Desk in Johannesburg. As a result many more meetings ensued and together with the Festival Chairman, Professor Alan Crump, and Professor Guy Butler – and with the help of numerous concerned Grahamstown activists – we formed an alliance with the National Interim Cultural Co-ordinating Committee. In October of 1990, the National Arts Festival was the first mainstream cultural group to back the cultural boycott in recognition of the imbalances in our society.

The following years were not easy but with the dogged determination of the Festival Committee and incredible support and encouragement from our sponsor Standard Bank we started on the road to change with the aim of making the Festival, through various programmes and initiatives, begin to address the imbalances of the past striving towards making the Festival accessible to all.”

Lynette was instrumental in sustaining the Fringe; a truly free space for artists to present work and one that broadened opportunities for practitioners. She guided the development of The Studio Project, a dedicated Festival venue in the township in Recreation Hall on Albany Road and expanded the Festival to include as many people as possible.

Part of her legacy at the Festival was the Arts Encounter Project, that distributed free tickets to audiences who would otherwise not have been able to experience the National Arts Festival. Under her leadership, the Festival continued to make an important impact on its host city, Makhanda. At the end of her tenure at the Festival it was estimated that between 1991 and 2007 the Festival contributed R 688 million to the economy of Makhanda and R2.8 billion to the broader provincial economy of the Eastern Cape.

Lynette was quoted as saying, “My life as a passionate supporter for the growth of South African arts and the many talents of this country, have endowed me with a precious legacy that has allowed me to recognise the public value of the arts for this remarkable country which we all call home.”

Just recently she expressed her profound excitement and encouragement for the Festival’s decision to go virtual in the face of Covid-19 saying that when she heard about the decision she ‘just wept’ – “I think it’s so brave and so exciting, something new, something different. One of the things that people must remember is that for years and years there have been artists who have entertained us and given of themselves, now they need you as much as you’ve enjoyed needing them in the past.”

Past colleagues who worked with Lynette have shared stories of her laser-like focus and absolute commitment to steering the Festival through challenging times.

Lynette’s successor Tony Lankester shared that “For my first decade with the Festival, Lynette was my sounding board and compass. Her honesty, directness, and instinctive response to any dilemma, thorny issue or challenge was usually spot on. Always free with her advice, always forthcoming with a response when it wasn’t taken. Sometimes disapproving, occasionally despairing. But always pragmatic and honest.

“In a country that typically doesn’t reward, remember and celebrate the arts, it’s hard to imagine where we would be if Makhanda was not transformed into an amazing oasis every year. Lynette’s legacy is that she built that with unsurpassed tenacity and passion. Her passion was her work, her work was her passion. And it showed. In the gratitude of the hundreds of artists she cajoled, nurtured, berated and embraced in her tenure. And in the fact that they all became, and remained, her lifelong friends after. Lynette’s passing leaves a massive hole in many lives. In those of her beloved Rotary, Hospice and St George’s Cathedral. And in the hearts of those who, like me, sat opposite, behind or alongside her as she steered the Festival through some impossible times with grace, dignity, and love.”

She also worked closely with former NAF Artistic Director Ismail Mahomed, and the two maintained a close friendship long after she left. In a tribute to her on his Facebook page, Ismail said, “Lynette was an absolute legend. It is impossible to write the history of South African theatre and arts festivals without acknowledging her immense contribution. She was the mother of South African arts festivals. She was a nurturer of arts careers. She was a giant who left great footprints in the sand.”

Monica Newton, current CEO says she was relieved to be warmly received by Lynette when she first arrived in Makhanda. “Lynette came to greet Rucera and me at our first engagement with the Festival team. She was so warm and welcoming to two people who had not only taken up new jobs but moved cities to do so. We came to understand that this was just Lynette being Lynette! Generous, kind, charming, incredibly supportive and very proud of being a strong feminine presence at the Festival. With a pronounced twinkle in her eye, she told us that when it came time for her to step down, it took not one but two men (Tony and former Artistic Director Ismail Mohamed) to fill her shoes! Her endorsement meant the world to both of us, and there is no doubt that her passing will leave a permanent gap for the Festival community and Makhanda. Like many people who leave an indelible mark, Lynette will never be replaced. Her warm presence welcoming art lovers and artists to Makhanda, her belief in the power of the arts to change places, people and thoughts and incredible work ethic will always be at the heart of the ‘mother of all festivals’, her beloved National Arts Festival.”

In closing her address at Rhodes, Lynette gave her audience some advice: “When you come to a crossroad ask yourself these questions to help guide you on which road to travel. Of the things we think, say or do:

And this was how Lynette lived; making a great contribution to life from which we all benefit. Her relentless drive for accessibility and empowerment is being carried on by the Festival and we would like to express our deepest gratitude to her for all that she gave to the National Arts Festival and to those she befriended and enriched with her wisdom. Our deepest condolences to her friends, family and everyone for whom life was just that little bit more special for having Lynette in it. Recently, Lynette Marais was the recipient of the 2020 Dean’s Award at the Cathedral and we share here an edited version of  the tribute by the Dean, Andrew Hunter,  that accompanied it.

In making this award to Lynette, we are honouring someone who has, through her leadership of the National Festival of the Arts for 20 years, served the whole of South Africa and its artistic and diverse cultural communities with dedication and distinction. Her service in the role of Festival Director brought both the tangible benefit of increased income to this city, and, more importantly, the intangible benefits of cultural wealth to the country as a whole. Her particular contribution to the Festival was summed up by Professor Paul Maylam, when he presented her for the degree of Doctor of Laws, honoris causa:

Lynette Marais took over the directorship of the Festival in 1989 at a challenging time of significant political transition in South Africa. The hard-line PW Botha era was about to end, and the path to democracy to begin – a transition that would inevitably have an impact on the Festival and pose an enormous challenge for its director.

She responded proactively and imaginatively. A first step was to invite Barbara Masekela to speak at the 1990 Festival – a key figure who had long headed the ANC’s arts and culture desk in exile. At that same Festival three to four thousand complimentary tickets were distributed to local communities lacking the means to attend events. Lynette moved to have alternative protest theatre, art and music showcased. From 1991 the Festival Committee became more culturally diverse in its composition. The critique that the Festival was overly Eurocentric, geared towards the promotion of western high culture, became harder to sustain.

But perhaps as important was the quiet way in which, after her formal retirement, continued to work for the Festival, supporting and enabling a younger generation though a time of transition.

She has also served the local community with great distinction through Rotary and Soroptimists.

But it is her faithful service as a Lay Minister and trainer of new Lay Ministers which has specially endeared her to her fellow worshippers at the Cathedral. Here she brought her early training in drama to bear, always speaking and reading with memorable clarity and audibility. The prayers she chose and sometimes wrote enriched many a Eucharist with their relevance to the season and their depth of spiritual insight. She has been one of our absolute stalwarts, always superbly and carefully prepared for duty; an Altar Server at the 7.30 am service; a wonderfully faithful LM at Fort England; someone who always had a laugh, a joke, a wise crack; and above all, a person of strength and humour and wisdom and courage. Deep faith. Immense loyalty. Utter reliability. Integrity. Her word was and is gold.

Her ministry and witness both within and beyond the walls of the Cathedral have been a great blessing to us all, and to many, many others in the wider community.