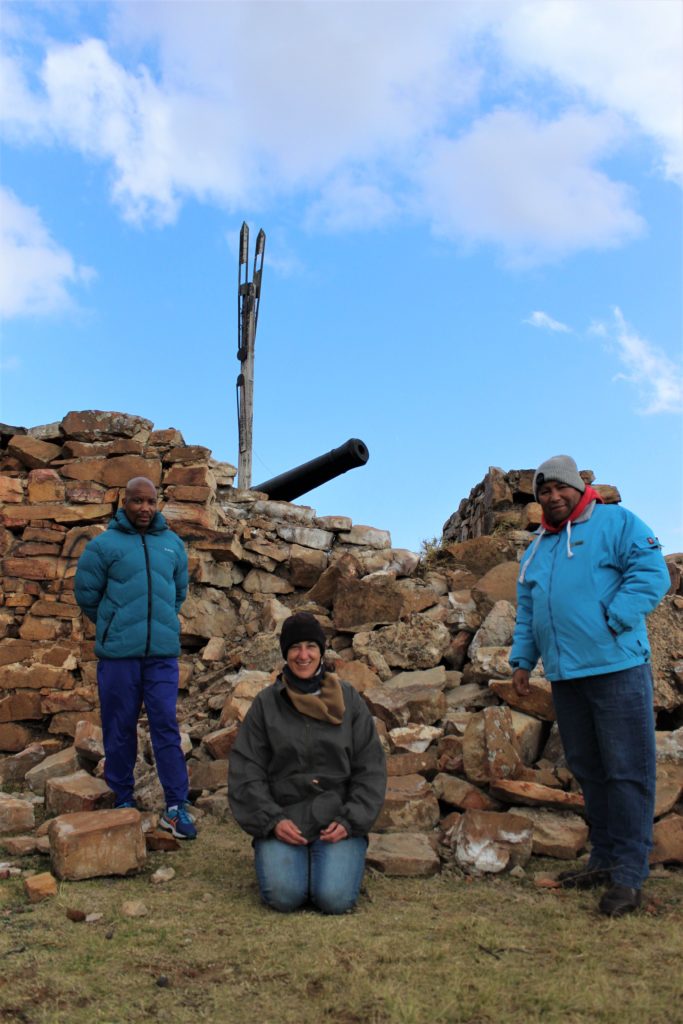 Albany Museum staff at the collapsed wall at Fort Selwyn are Barry September, Assistant History Curator, Celeste Booth, Archaeologist and Heine Kohl, Artisan Foreman: Technical Serrvices. Note: In this outdoor setting, the photographer requested them to remove their facemasks for the purposes of the photo. Photo: Sue Maclennan

Booth was called in to record and report the damage so resources can be brought in to repair and secure the heritage site. Grocott’s Mail met the Albany Museum team at the Fort, who were there to seal off the damaged section with tape. “Please don’t climb on any part of the wall while it’s in this state,” is Booth’s appeal to the public. “Not only is it dangerous, but also you could cause further damage.”

Using information sourced from the Albany Museum History Department, Booth replied comprehensively to questions about the structure and its history, and we share an edited version here.

When was the wall built, and who built it?
The Selwyn Battery (or Fort Selwyn) is situated on Gunfire Hill overlooking Makhanda. It was proposed by Sir Benjamin D’Urban in March 1835 and was built between August 1835 and June 1836. The design and construction was conducted by Captain (later Major) Charles Jasper Selwyn of the Corps of the Royal Engineers.

Captain Selwyn was stationed in the Eastern Cape from 1834-1842 and designed several other fortifications, including Post Retief. He was also responsible for the surveying and construction of the road between Grahamstown, as Makhanda was known until recently, and Fort Beaufort.

Is there a name for the method used to build it?
The layout is an asymmetrical seven-pointed start redoubt formed on an irregular square. The shape of the fort was to enable the maximum number of men and guns to fire from the walls. The walls were constructed out of local dressed stone.

The guns are not placed en barbette, but in the battery to fire over the parapet. Originally there were only two guns. Three iron ex-naval 9-pounders with the Cypher of George III were mounted on replicas of wooden garrison carriages cast circa 1800 at Carron Ironworks in Scotland.

(Google says the following of “en barbette”: The term originally referred to a raised platform on a rampart for one or more guns, enabling them to be fired over a parapet. This gave rise to the phrase en barbette, which referred to a gun placed to fire over a parapet, rather than through an embrasure, an opening in a fortification wall.)

The accommodation included a Barrack Room and Officers’ Quarters and a Cookhouse.
The Fort was originally surrounded by a ditch approximately 0.6m deep and between 2.4m and 3m wide.

The semaphore mast was erected in 1845 as part of a telegraph system intended to connect Grahamstown with Fort Beaufort and Fort Peddie. This system, however, failed as the masts were often obscured by mist and haze.

The fort was occupied by the Royal Artillery from 1836 until 1862, when most of the garrison withdrew from Grahamstown. The fort was manned during the South African War of 1899-1902.

In 1925 it was converted into a domestic residence and tea-garden.
The fort was handed over to the Albany Museum in 1977 for display purposes and is still under the curation of the Albany Museum.

Is there any indication what may have caused it to collapse?
The wall collapsed in that exact same spot in 1998, noted in the opinions section of the Grocott’s Mail 3 March 1998 (see photo). So it could be a structural weakness. This will be confirmed when the heritage assessment has been conducted.

Previous restorations:
The Fort was was restored by the Cape Provincial Administration during the 1970s as part of the 1820 Settler Monument Scheme. Archaeological excavations were conducted by Hillary Deacon, then curator of Archaeology at the Albany Museum and his wife Janette Deacon, prior to the restoration.

The semaphore mast was restored during 1979 and 1980.
“I unfortunately cannot confirm the restoration process from the collapsed wall in 1998,” Booth said. The only evidence available was the photo in Grocott’s Mail.

Given it’s a heritage site, what resources are available to have it repaired and secured?
Fort Selwyn was declared a National Monument in 1936 by the then Historical Monuments Commission. The fort currently holds a Grade II Provincial Heritage Site heritage status. This grading is done by the South African Heritage Resources Agency – SAHRA). This means that the site is under the authority of the provincial heritage resources authority (Eastern Cape Provincial Heritage Resources Authority – ECPHRA).

The Albany Museum has requested assistance and information from the ECPHRA for possible funding. External funding may also be required depending on the recommendation of the heritage assessment report and restoration plan.

Is there any estimate of how long it will take to have it repaired?
Not at the moment. The Albany Museum is currently compiling a project brief for specialist heritage practitioners (such as specialist built environment heritage specialists, historical architects, and/ or historical archaeologists), to advise on the process of conducting repairs on a provincial heritage site.

An assessment of the damage and plans for repairs /reconstruction /restoration would have to be compiled to attain a permit from the Built Environment Section of the ECPHRA. The process also requires consultation with relevant stakeholders.

Does SAHRA have a programme for heritage sites to monitor and maintain them?
SAHRA mostly maintains National Heritage Sites, for example Retief’s farmhouse, Mooimeisiesfontein, in Riebeeck East. Provincial Heritage Sites are maintained by the provincial heritage authorities (ECPHRA in the Eastern Cape). A list of active or pending projects is available on the ECPHRA website (www.ecpra.org.za); however, this may be affected by the impact of Covid-19.

Poverty, homelessness and the lottery of birth