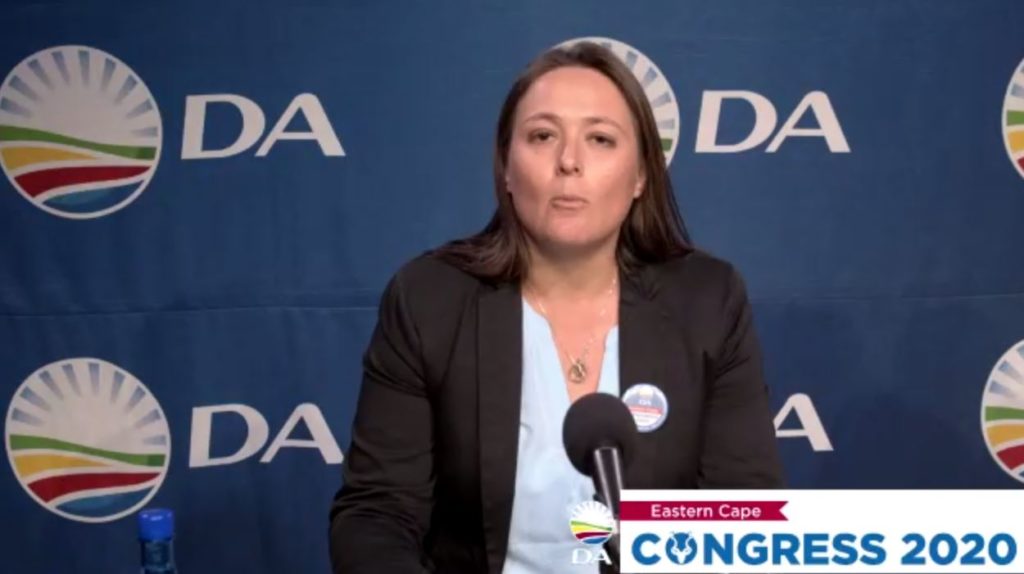 The Democratic Alliance (DA) stepped boldly into the post Covid-19 world with South Africa’s first virtual political party congress on Saturday. The party’s Eastern Cape congress was in some ways a proof of concept – yes, it is possible to hold a virtual elective meeting and thus avoid cramming hundreds of people into confined spaces.

There were 309 delegates taking part in the congress through a mix of about 150 link-ups on Zoom. Many of the delegates participated in groups convened in hybrid connections at party offices around the province.

The main purpose of the congress – to elect leaders to represent the province at the DA Federal Congress at the end of October – was notably unruffled. As the party’s interim leader, John Steenhuisen, said in an allusion to the pandemonium and corruption at some ANC congresses, there was no throwing of chairs and no one was passing around brown envelopes from Gavin Watson.

The actual voting was not open to the media, but Communications Manager, Norman Silke said that the vote count went ahead “without a single query, objection or contest”.

In other official business at the congress, deliberated on six amendments for the party’s constitution. One was withdrawn by the person who proposed it and the other five will be carried forward to the DA’s Federal Congress on October 31 and November 1.

The Provincial Congress also considered 13 motions that were individually discussed for a limited period and then voted on. Almost all passed with scarcely a ripple, but motions that affected how language is used within party structures became a little contentious.

The party’s Member of the Provincial Legislature (MPL) responsible for health, Jane Cowley, presented Motion 3 for the decentralisation of the Emergency Medical Services (EMS). She said that many incidents have occurred where EMS ambulances have not been able to save lives because their hubs are too far away.

The newly elected Deputy Provincial Chairperson, Vicky Knoetze, proposed Motion 5 for the establishment of a special investigative unit – like the Hawks – to investigate fraud and corruption in the provincial government. The motion was carried comfortably.

Other motions included praising various prominent members of the DA and condemning ANC initiatives such as the District Development Model. Delegates also proposed special training for party activists who were not staff members; support for DAWN, the DA’s Women’s Network; and the monitoring of actions passed by previous congresses.

The focus of the congress was acutely directed at the local government elections set for next year. Leadership decided to focus on five municipalities: Nelson Mandela Bay, Kouga, Dr Beyers Naude, Inxuba Yethemba and Koukamma where the DA believes it can win a majority.

Kouga Municipality and its mayor, Horatio Hendriks, were repeatedly held up and applauded for their successes since the DA’s victory in 2016. Hendricks has according to party leaders, vastly improved the administration of the municipality, but they heaped special praise on him for launching a ‘plastic road’ in Jeffrey’s Bay.

Nelson Mandela Bay (NMB) Metro received more attention than any other area at the congress for several reasons. Provincial leader, Nqaba Bhanga happens to be the party’s mayoral candidate for NMB and the DA believes it has very good chance of winning back the metro that it ran for about two years.

Party leaders emphasised that when DA led a coalition to govern the NMB Metro, it experienced a massive turn-around, reducing rampant corruption, eliminating 10 000 bucket toilets and radically cutting back on gang violence.

The Interim Federal Leader of the DA, John Steenhuisen, made an impassioned plea to avoid newly formed splinter parties just before an election. Most certainly thinking about Herman Mashaba who was launching his new ACTIONSA party at the same time as the DA Congress, Steenhuisen pointed to COPE, AGANG and the GOOD party as parties launched with much fanfare just before an election.

He said that these parties were a waste of time and left supporters with “buyers’ remorse”.