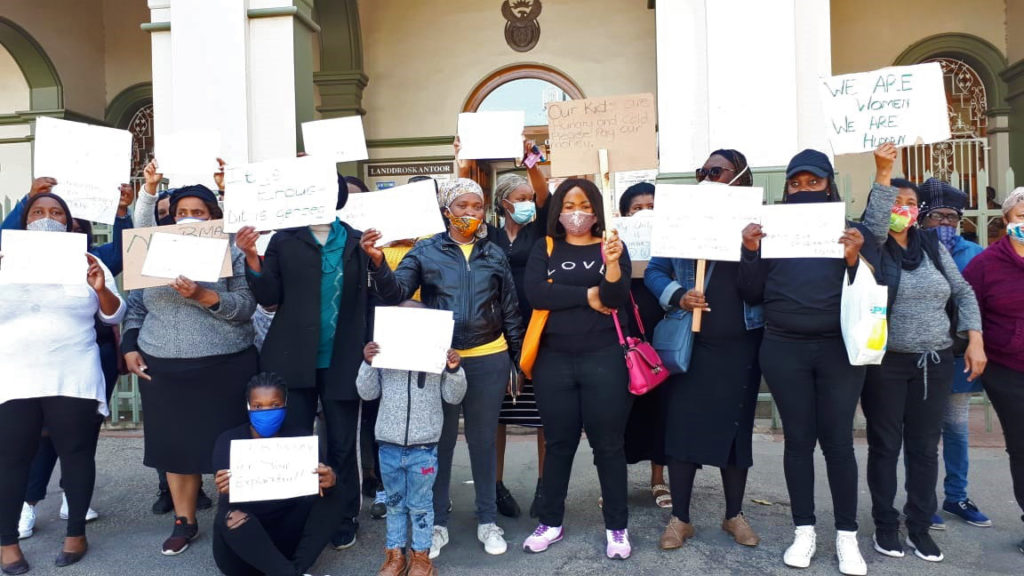 As Grocott’s Mail previously reported, these women are supposed to receive money deducted from the salaries of parents employed by various government departments. These funds are paid by entities such as the departments of Defence and Education, and Makana Municipality, through the maintenance court at the regional courts complex in High Street. The payment glitch was caused by the Department of Justice and Constitutional Development’s migration from the legacy Justice Deposit Account System (“JDAS”) to the MojaPay payment system. This was done shortly before the Covid-19 lockdown. The difficulty of movement and accessing documents during the lockdown exacerbated the situation.

Officials previously told Grocott’s Mail that incomplete or absent documentation (such as birth certificates and court orders) meant the mothers couldn’t be legitimately registered on the new system. When Grocott’s Mail spoke to the Department in May, officials said while this documentation was essential for auditing, a way would be found to temporarily bypass this requirement.

In May, 279 people in Makhanda were affected.

This week, in an emailed response to renewed enquiries from Grocott’s Mail, the Department of Justice and Constitutional Development is aware of this issue and has previously reported that the

Deputy Minister John Jeffery visited the Eastern Cape on 21 August to investigate maintenance payment issues. He conducted a ministerial oversight visit in East London, where he met with department officials and received a progress report on how the matter was being resolved.

“Many households rely heavily on maintenance benefits in order to survive,” Jeffery told Grocott’s Mail in the Department’s reply. “Especially at a time when the impact of Covid-19 is making people even more vulnerable to hardship, we must ensure that people receive their maintenance benefits and receive them timely. No person should be left without their maintenance. We view this matter in an extremely serious light and we are monitoring progress closely.”

And the Department’s Spokesperson Crispin Phiri said various interventions had been made to assist in resolving the payment failures. The Department had deployed additional dedicated capacity at the Department of Justice and Constitutional Development’s national office to assist the Eastern Cape Region in processing payments, Phiri told Grocott’s Mail.

Grocott’s Mail spoke to some of the 36 women in Makhanda who are still struggling to get their payments.

“I have not received any money from the maintenance court since February this year until now,” said Phelisa Thame. “They told me a different story last month. They said my file was missing, but when I got there last week, they said they captured my file and they are following up with the Post Office, which is where my money comes from.

“This is sad. My kids are suffering because of this. They do not have winter clothes and I do not work – I only depend on grant money,” Thame said.

Linda September said, “It is very painful for me because I do not have a job. I depend on this money. It has been six months without payment. I last received money in January. They keep saying it’s a new system that caused the delay. Now recently I went there and they said my file went missing.”

Speaking at a lunchtime protest by a group of women outside the court complex in Makhanda on Thursday 27 August, Merelise Sphere said she’d come there every week.

“I’ve been waiting for five months,” said Sphere, whose payment comes to the Maintenance Court via the South African Police Service. “Since February, I’ve received no payment. Every week when I come, there a new story.

“I’ve put in so many queries, and now I don’t know what more I can do.”

Earlier this year, Phiri told Grocott’s Mail, “The new [MojaPay] system has its own teething problems. When these are resolved, everything runs seamlessly.

“All payments will be paid through MojaPay immediately when employers deposit the money into MojaPay. This includes those months when monies bounced on the old JDAS account.”

For 36 Makhanda women, the day when this happens will be not a moment too soon.