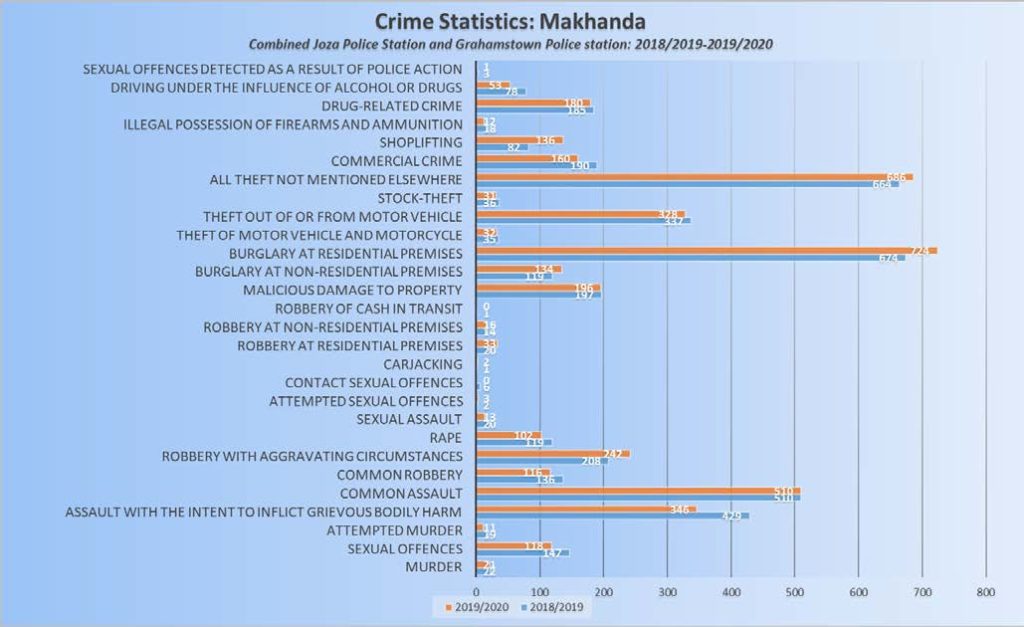 By LILLIAN ROBERTS
Less driving under the influence of alcohol or drugs, more shoplifting and an average of two burglaries a day are some of the changes since the last crime statistics reported for Makhanda. The South African Police Service, along with Stats SA recently released crime statistics from April 2019 to March 2020. These statistics include 21 crime categories. Four of these categories are crime detected as a result of police activity and the remainder are crimes reported by the public.

Makhanda has two police stations – Grahamstown and Joza. For this report, Grocott’s Mail combined the statistics for these two stations.

In the period from 2019 to 2020, a total of 118 Sexual Offence cases reported (sexual offences include rape, sexual assault, attempted sexual offences and contact sexual offences). This translates to a 29-case decrease from the year before.

The crime statistics for 2019/2020 Makhanda show that 242 cases of robbery with aggravated assault were reported, a 34-case increase from the year before.

Assault with intent to inflict grievous bodily harm (“Assault GBH”) numbered 346 reports, almost one a day, yet overall from the year before there has been a 83 case decrease, translating to -19.3%.

Common Assault cases during the same time recorded no statistical change from the year before, numbering at 510 common assault cases opened.

Burglaries at residential premises number 724 cases reported, increasing from the year before by 50 incidents, a 7.4% increase. This means that between 2019/2020 there were approximately two burglaries on average every day.

Robberies at residential premises numbered at 33 reports, a slight increase of 13 instances from the prior year.

There were 180 drug related cases opened (not dissimilar to the year before, at 185) as well as 53 cases reported regarding driving under the influence of alcohol and/or drugs. There was a 25 case difference from the previous year, a 32.1% decrease in drunk driving cases reported.

Thefts of cars and motorcycles were recorded during 2019 to 2020, at 32 reports, a three-case decrease from the year before.

Theft out of or from car/motorcycle was recorded at 328 incidents, a 9 case decrease from 2018 statistics. A total of 2 carjacking cases were opened in Makhanda during 2019 to 2020, an increase of one case from the year before.

12 cases of illegal firearms and ammunition were opened in 2019/2020 compared to 18 cases the previous year.

Between 2019 and 2020, there were no cases of robbery of cash in transit, bank robbery or truck hijacking.