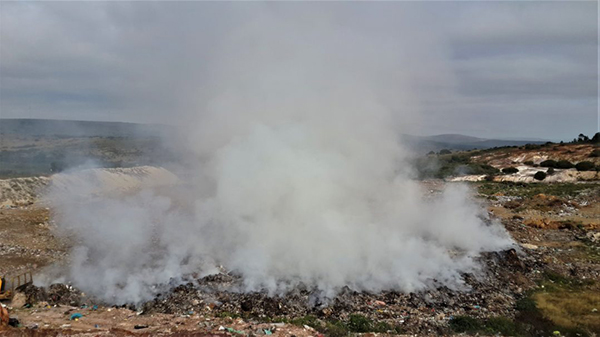 The state of Makhanda’s rubbish dump in the coming weeks could determine whether Makana’s Mayor and Municipal Manager escape a six-month jail sentence. This comes as Judge Miki Mfenyana this week dismissed with costs their application for leave to appeal her contempt of court ruling.

In a judgment handed down on 4 March 2020, the Judge ruled that the Mayor and Municipal Manager were in contempt of court for failing to comply with a five-year-old order to properly manage the Cradock road landfill.

In 2015, Judge Jeremy Pickering handed down a detailed court order requiring Makana Municipality to undertake specific actions to ensure the safe and environmentally sound operation of the landfill site west of the town. The applicants in the matter were the Makana Unity League, and following a subsequent series of fires at the site over several years, they sought to have Makana held in contempt of court.

This time, though, they singled out the political and administrative heads, respectively. They sought to have the Mayor and Municipal Manager held personally liable.

In March, Judge Mfenyana ruled that they were indeed in contempt of Judge Pickering’s 8 September 2015 order. Not only that, but Judge Mfenyana also ordered that the Municipal Manager be investigated for possible perjury for allegedly lying under oath. This came about as the applicants produced photographs showing a situation at the site different from what he had portrayed in his evidence.

Judge Mfenyana ordered that they comply with Judge Pickering’s 2015 order within 30 days. And she sentenced the Mayor and Municipal  Manager to six months imprisonment wholly suspended on condition the municipality does indeed comply.

According to the 8 September 2015 order, Makana Municipality had to undertake specific actions to comply with environmental legislation. These included refurbishing the perimeter fence, controlling access to the site, developing a waste-screening mechanism and appointing an independent specialist to review environmental monitoring data.

Judge Mfenyana confirmed her ruling. Her judgment dismissing their application for leave to appeal was handed down on 13 August.

The Makana Unity League would be monitoring compliance with the 2015 order in the coming days, their Attorney Brin Brody told Grocott’s Mail.

“We will be conducting an audit of the landfill,” Brody said. “If it has not been fixed according to Judge Pickering’s order, we will apply for the Mayor and Municipal Manager to be sentenced to a full year’s direct imprisonment.

“There is no doubt that the judgment by Judge Mfenyana was a sound and good judgment,” Brody said. “Here is another example of the Mayor and Municipal Manager wasting ratepayers’ funds on unnecessary litigation.”

The Makana Unity League’s Owen Skae hailed the latest judgment as  a victory for the citizens of Makhanda.

“This court case regarding the dump site has been going on for a long time,” Skae said. “Once again it’s confirmation that Makana Municipality has an obligation to deliver services to the citizens and that’s why we embarked on this court action in the first place.”

Skae said in the Constitution, Chapter 3, Section 41.1(h)6 on the principles of co-operative governance and intergovernmental relations urged ‘avoiding legal proceedings against one another’.

“Ultimately we just really want that local government fulfils its mandate. Hopefully this is the final confirmation of what needs to be done so we can all live safely in our city.”

Mayor Mzukisi Mpahlwa said Makana Municipality took note of the judgment and would discuss its implications with their lawyers.

A request for comment by Municipal Manager Moppo Mene had not been responded to by the time of publishing.