A life of integrity, activism and faith 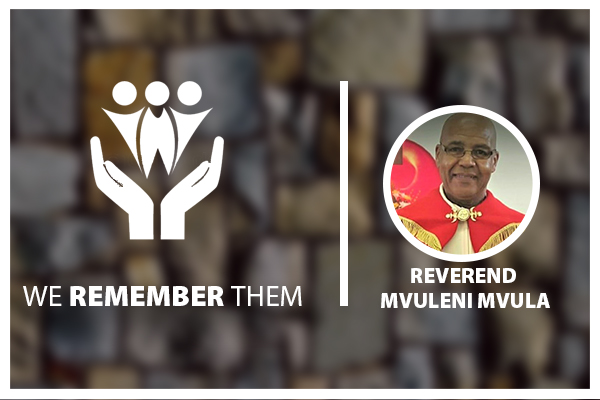 Reverend Mvuleni Mvula was born in Grahamstown on 5 April 1958 to Nowethu and Zithulele Mvula.  He was one of 13 siblings, of whom 10 remain.  He completed his early education at Fikizolo Primary popularly known as “eTshetshi”. From  there, he proceeded to Andrew Moyakhe Primary and finally to Nathaniel Nyaluza High School, where he matriculated in 1978. There, he excelled in rugby and he joined the Easterns rugby team, as well as Sweepers, from Port Alfred.

Mvuleni’s working life began at Oxford Furnishers, followed by Kowie Hospital, where he worked as an assistant male nurse.

He’d learnt a lot from his father, Zithulele, a tailor, and Mvuleni’s next job was at Grahamstown Upholsteries.  It was while he was working at Rhodes University’s Microbiology Department that he finally joined the Fellowship of Vocation and began a career in the priesthood that continued for 35 years.

In 1983, Mvuleni went for training at the Federal Seminary (FEDSEM) in Pietermaritzburg. He completed his training in 1985 and served in the parishes of St Andrews in Mdantsane; Church of the Ascension in Cradock; St Mary Magdalene in the Port Elizabeth Diocese.

He came back to the Grahamstown Diocese in St Peter’s Parish (Alicedale, Sidbury and Highlands). Finally, he served in St Clement’s Parish, where he was ordained as the Rural Dean.

In the early years of his career he began to write about Anglican Baptism – writings he was still planning to finalise.

On 1 September 2001, Mvuleni was employed as an Electoral Project Coordinator (Admin Officer). He represented South Africa as one of the delegates who went to observe the elections in two African Countries: Lesotho (2007) and Namibia (2009).

Mvuleni decided to retire from the IEC on the 25 March this year, but still held on to his Ministry until the lockdown.  He had a lot vision for St Clements, as well as for his family.

Mvuleni became extremely ill on 15 July 2020 and passed away on 27 July at St George’s Hospital on Port Elizabeth.  He is survived by his wife Nombeko Nakhane, his siblings, children, grandchildren, nephews and nieces. – Eulogy from Mvuleni’s family

Activist for human rights, companion in the life of faith

It is a terrible time in the life of the diocese of Grahamstown and for all who knew, loved and appreciated Mvuleni Mvula. We are heartbroken to have a lost such a humble and precious life, a brother, friend, an activist for human rights and those who are marginalised in our communities, a companion in the life of faith. We keep Nakhan, his darling wife, and his children, in prayer . May his soul rest in peace eternal and rise in glory. – Venerable Mzinzisi Dyantyi, Archdeacon Grahamstown.

Previous ArticleDedicated and humble
Next Article Laughter, stories and chocolate