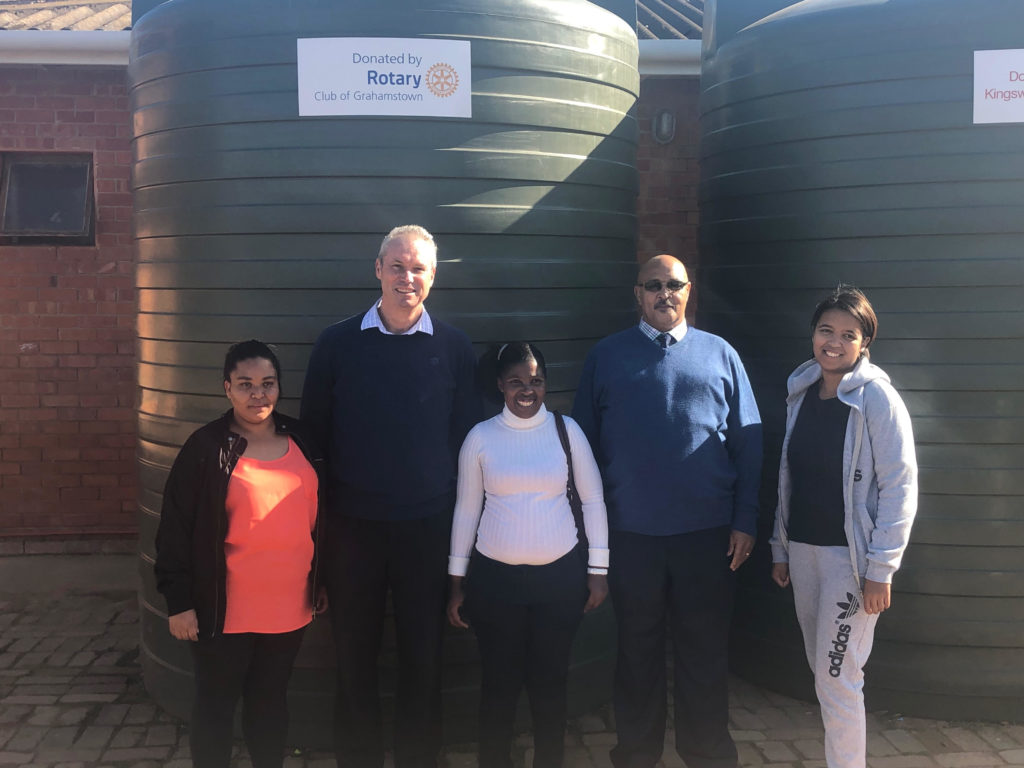 By AALIYAH ABOOBAKER and TEMBA MKOSI

The current water crisis in Makhanda (formerly Grahamstown) is having a devastating impact on its inhabitants. Parts of Makhanda East, mostly townships, are sometimes left without water for over a week at a time. When levels are critically low, bigger institutions such as schools are badly affected.

George Dickerson Primary School was one such institution that was impacted, particularly when it came to its ablution blocks.

“The water crisis in Grahamstown was severely affecting the school,” said Principal Malcolm Douglas. “In January, the school lost five teaching days in the first two weeks of term. The learners had to stay at home because they could not use the ablution blocks.” Luckily, Belinda Tudge from the Rotary Club of Grahamstown became aware of their plight through her outreach work with George Dickerson.

“I have been a volunteer with the Lebone Centre for several years now, helping learners in Grade 1 and 2 with English through the Project Read programme,” she said. Over time, Tudge came to notice the school’s plight and put their case forward to the Rotary Club of Grahamstown. The Club subsequently donated two 10 000-litre tanks and a pump, which were fitted in March this year. This act of kindness inspired further good will, as Kingwood College was also moved to help the school.

“When Kingswood saw that more than 766 learners needed water, they organised another tank,” said Douglas. “There are now three tanks that are feeding the ablution blocks. This means that the school will have sufficient water to keep the ablution blocks functioning despite municipal outages. In most cases, there are water outages where our learners come from – but the happy feeling is that ‘I am going to school and there is water at school.’ They can now safely go to the toilets and we come to school without worrying about ablution blocks that are going to be dirty.”

Tudge also noticed that George Dickerson’s infrastructure was in need of help.

“Last year, Makana Brick donated a large quantity of bricks for paving,” she noted. “However, the school did not have sufficient funds to cover the cost of laying the bricks. My daughter and grandson after visiting George Dickerson last year, raised funds at their school, the Canadian Academy in Kove, Japan, which paid for paving outside the Grade R section at George Dickerson.”

Principal Douglas added that the money was paid over to Rotary, who handled the project.

“The community of George Dickerson Primary is extremely grateful for the generous
donations from the Rotary Club of Grahamstown and Kingswood College,” he said. “Our
learners will never be deprived of a single day of education due to water outages.” Douglas
also expressed his heartfelt appreciation for the work of Belinda Tudge. “We will never forget the unselfish contribution from her daughter and grandson in Japan. Our Grade R area looks splendid!”